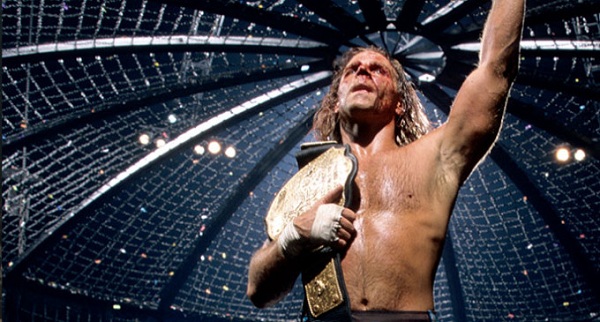 Vintage Vault Reposts are Pay-Per-View recaps with Justin and Scott’s commentary, including star ratings. Please note, these were written in the past and may have dated references.

Fun Fact: The road to the Elimination Chamber began the night after No Mercy on the 10/21 Raw. GM Eric Bischoff said he wanted to do something big, something to trump the Hell in the Cell match that Smackdown had that main evented No Mercy. So he came up with this contraption that no one could really wrap their heads around until they saw it at the PPV. The next week Bischoff described it further. He said the match was a hybrid between the Royal Rumble, a Survivor Series match, and NWA/WCW’s War Games match. The structure is a big steel structure enclosed in chains that’s even with the ring apron. In it are four chambers encased in Plexiglas. There are a total of six competitors, two will start the match and the other four will go into these chambers. Every five minutes a random participant will enter. The match continues until five men are pinned or made to submit. The last man standing will be World Heavyweight Champion. Then he announced the participants: Champion Triple H, Rob Van Dam (Screwed at Unforgiven), Kane (Screwed at No Mercy), Booker T, Chris Jericho, and the returning Shawn Michaels, who hadn’t been seen since Triple H crushed him in the back with a sledgehammer at Summerslam. He returned on the October 28 Raw when he popped out of a casket and attacked Triple H during a match with Kane. From that point on, all six men would interfere in each other’s matches and pretty much cause havoc until this night at the Garden, in particular Michaels and Triple H.

Scott: So going in you had a feeling that this match would have that special flair to it. Not only is it six very good workers but you have this crazy structure that has a lot of chain link and a steel grate for a ground surface, plus plenty of glass to throw people through. It was also obvious that Triple H needed this match as he had been slumping of late. There was no telling what kind of pleasurable train wreck this match would provide. Overall it was a lot of fun, as all the guys were able to shine at one point or another. Besides Michaels winning, Jericho probably looked the next best here, as he gets two pins before falling to HBK’s Sweet Chin Music. The match probably didn’t need to be this long, as Triple H and Michaels go for almost nine minutes before Shawn gets the best of his former best friend. Now the one guy that needs to get a tongue lashing here, at least from me, is Rob Van Dam. He attempts a Five Star Frog Splash on Triple H while standing not on the top rope, but on top of one of the chambers. The problem is that the roof is too low for RVD to effectively do the jump. So he tries it anyway and doesn’t extend his legs far enough, so his knee goes right into Triple H’s throat. Triple H works the rest of the match, but has to go to the hospital due to his throat swelling up and closing. He misses Raw the next night and many speculated that this was a very serious, perhaps career-ending injury. I can’t possibly think that they planned that move, as they must have seen that the angles wouldn’t have allowed for an effective Frog Splash. Now some have said that Triple H was too close to the chamber and that Van Dam didn’t have enough room to jump out, and instead went straight down. Regardless, the roof was too low for RVD to have spread his legs out. I’m not going to harp on it; all I’m saying is that Van Dam did a stupid thing by trying that. Of course all the anti-Triple H fans were hoping that his career was over, which is downright disgusting. The other point to mention is the 180 degree turn that Shawn Michaels has taken. Let’s go back six years to the 1996 Survivor Series in this same building, when Shawn lost the WWF Title to Sid. The MSG crowd hated the cutesy babyface chick magnet HBK and they were very pro-Sid in that match. Move ahead to this moment, and when HBK smacks Triple H in the face with Sweet Chin Music to win the match and the title, the crowd was overwhelmingly in Michaels’ corner, with confetti and everything. Shawn Michaels, a man who five years earlier was angry, selfish and hyped up on painkillers, was now clean, had found God, has a family and is the World Heavyweight Champion. Justin can explain the moment better since he was there, but even on television it was wonderful to see. I applaud Shawn for coming back and bringing it to the table in the second part of his career. Although not a perfect match, and for a new gimmick it had its flaws, it certainly gave the MSG crowd some great moments and came close, but not exactly matching, the brutality of Brock/Taker from the month before. Grade: ****

Justin: At Wrestlemania XII, Vince McMahon uttered the famous phrase “the boyhood dream has come true” for Shawn Michaels. As compelling as that victory was, his win here was even more heartfelt and meaningful. Michaels was a drugged up, broken down mess when he was unceremoniously shoved out of wrestling in 1998. He would get his life back together, clean up and make an unexpected return for one last match at Summerslam. After some time off and his body feeling good, Shawn decided to come back on a part-time basis. He would work TV, wrestling on a limited basis but would stay off the road for house shows. He made his big return in October and Eric Bischoff added him to the match here. Eric would come out before the match, go over the rules and brag about his ingenious idea. Michaels would get the biggest pop and was the clear favorite while Hunter got the most heat. The Chamber provided some great visuals and sounds as well. The crowd would get into all of the great steel bumps on the grating surrounding the ring. RVD would toss Hunter around the ring to start, working in some crisp offense and bloodying the Game early on in the going. RVD used the cage nicely and worked in some Spiderman-like leaps onto the cage. After Hunter and Jericho worked RVD over for a bit, RVD would come firing back before dropping the fateful frog splash on Hunter’s throat. Hunter would spend most of the match writhing in pain in the corner. RVD also rolls around, clutching his knee before being eliminated by Booker. RVD would limp off and there live, it looked likely he was seriously injured because he was taken out so quickly after it happened. I agree with Scott in that the move was quite reckless and could have wreaked a lot of havoc. Many people thought Hunter would be hitting the DL again, but he only misses a few weeks. After RVD was eliminated, the crowd starts to die down a bit. They would wake right back up, however, when Kane tossed Jericho face first through the Plexiglas chamber in a sick spot. Kane would look strong here, dominating the action. However, the eliminations were sort of weak and felt anticlimactic. The crowd didn’t care for Booker’s elimination either. Once Michaels entered, their full allegiance shifted and the crowd rallied him. After three finishers took out Kane, Jericho and Hunter would begin to dissect Michaels. The drama during this heat segment was great as the fans were clamoring for a Michaels win. I will give Hunter a lot of credit here, as he was barely able to breathe but still put on a gutsy performance. Michaels would sneak a pin on Jericho as this great underdog story unfolded. I also want to give some credit to JR here as he was phenomenal calling the final moments of the match, really selling the underdog tale. We would get another nasty Plexiglas shot when Hunter catapulted Michaels through a chamber. The crowd really started to rock as Michaels fired back and dropped an elbow from one of the chambers. In another great moment, he would kick out of the Pedigree. He would then drill Hunter with SCM to a mega pop, cover and pick up the win and the title. It was an awesome feel good moment and the arena just exploded for the finish. It was a great celebration to watch live and you could help but feel happy for Michaels. While the match was a bit long, things got red hot when it got down to Hunter, Michaels and Jericho. This was a great debut for the Chamber concept and it ensured that the gimmick would be back for future encounters. Grade: ****