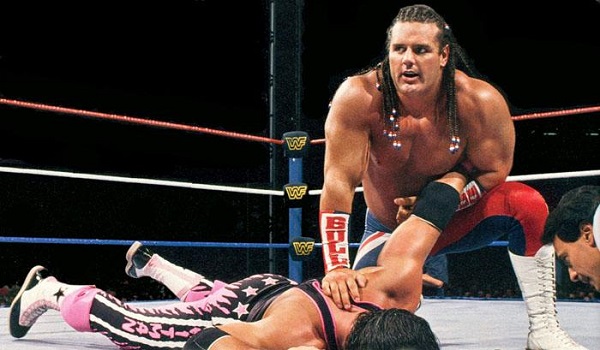 To honor the 12 year anniversary of the British Bulldog’s sudden passing, we look back at his biggest career win.

British Bulldog defeats Bret Hart with a reverse sunset flip at 25:09 to win the Intercontinental Title.

Fun Fact: This was Bulldog’s first WWF singles title. Heading into the match, they played up the family feud thing big time, saying the Hart family was torn over this match, especially Diana, who did not want to choose between her brother and husband. Bret played the heel role here, as he wanted to make sure Bulldog got over big in his home country. Bret made sure to whine about Bulldog being family, yet challenging him for the title, even calling him an ingrate at one point. Sadly, Bulldog would lose the title to Shawn Michaels in October, and would disappear to WCW during the steroid purge of late-92/early-93 and wouldn’t return until the middle of 1994.

Scott: The only time (at least that I can remember) that a PPV ends with an Intercontinental Title match (Wrestlemania VI doesn’t count). I don’t mean to downplay Bulldog’s win because it was a great match, but let’s be honest: this match wouldn’t have been the final match, and he may not even have been booked in it, if it wasn’t in his home country. With Diana Hart (Bret’s sister, Bulldog’s wife) constantly being shown in the crowd, it was a pretty good match to cap off a pretty good PPV. Vince and Bobby talk up Bret very well as the next solo superstar. You can tell they know each other well, because the moves were fairly stiff, including many hard spills to the floor. As the heel, Bret dictated the tempo perfectly, and a clearly blown-up Bulldog didn’t look too vulnerable. Bret seemed to grow over that summer, as he looked like a fresh-face rookie at Wrestlemania against Roddy Piper, and in a few short months is dictating tempo like a seasoned pro. A nice way to end the PPV with Bret, Bulldog, and Diana in the ring together, as it’s odd to see a PPV end without Hulk Hogan posing and posturing. Bret’s days as IC champ were done. He takes it to the next level within a month and a half. Grade: ****

Justin: An excellent match that solidified Bret Hart as a major player who could carry sub-par guys to awesome matches. Now, don’t get me wrong, Bulldog carries up his end of the match, but he would never have a match this good again (except when he fights Bret again). The crowd atmosphere definitely adds a lot to this match, as they are cheering rabidly for the Bulldog. These two are ULTRA stiff (especially laying in some NASTY kicks) with each other, as they had wrestled hundreds of times in Stampede, so they knew they could be. The match is capped off by an awesome ending which causes the crowd to go hysterical and the show goes off the air with a family reunion in the ring. If you haven’ seen this match, try and track it down, as it is well worth your time. Bret has even gone as far as to say it is his favorite match of all time, which really says something. The ending comes out of nowhere, but fits the pace and style of the match perfectly. Good stuff all around, and it was so nice to see such a refreshing and new ending to a PPV. Grade: ****1/2