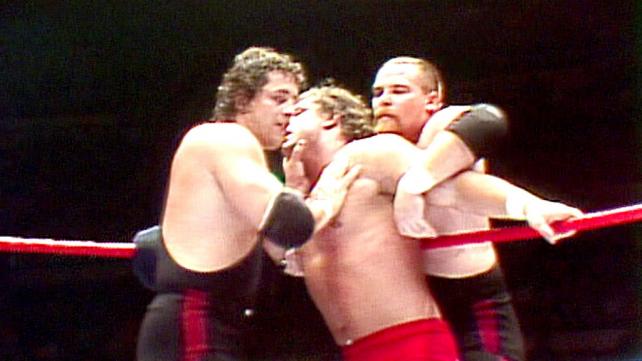 The British Bulldogs vs. the Hart Foundation (w/ “Mouth of the South” Jimmy Hart)

Since the WWF first formed back in 1963, one thing they seemed to not focus on in terms of the roster is the tag team division. They had tag team titles and always had some legit teams in the mix, but it was something that would take a spot on the card and was not the main focal point of a card. There would also be at least one tag match on the show which usually featured the tag champions and any other tag matches would feature one or two of the top feuds in the company at the time in a showcase. As we head into the middle of the 1980s and the dawn of the PPV era, it was clear that the tag division would start becoming a major focal point to the point that by the end of the decade, the tag division would be one of the strongest divisions in the company. The groundswell for that in essence begins this year as a few teams have started to filter in that will be critical in its growth, with two of those teams being the British Bulldogs and the Hart Foundation. Both Bret Hart and Jim Neidhart had been in the company for a few months now and have clearly been floundering as singles wrestlers, so they were put together as a team and you could tell that it was the best thing for both of them. As for the Bulldogs, they had just come into the company as a team and already seemed to be positioned as one of the premiere teams in the company.

The build for this particular match here at Madison Square Garden was pretty basic as the two teams have faced each other at a few house shows, and they have traded wins while also going to time limit draws. Whenever they wouldn’t face each other, we would see either team get a strong win and every now and then the Hart Foundation would work singles matches. It was very interesting that these two teams got the main event spot which made sense with Hogan not being there, but with a few other hot feuds going on it was still a good show of faith to these two teams that they were given the main event. I’m sure their matches on the circuit were gaining a lot of traction within the company for their quality and this was a good showcase for them in the home office.

One thing you have to say about these MSG crowds over the last few months is that they have always been hot for the entirety of the show, and that doesn’t change here as the Bulldogs get a big pop from the crowd while the Hart Foundation were already pretty hot as heels. Dynamite starts off with Bret and they lock up with Dynamite giving a clean break on the ropes, and they lock up again with Dynamite again giving a clean break on the ropes. They lock up again with Dynamite hitting a quick pair of armdrags on Bret and they lock up with Dynamite working the arm only for Bret to gain control, but Dynamite runs around the ring and sends Bret to the outside. The Foundation regroup on the outside before Bret returns to the ring and tags Neidhart, and they lock up with Dynamite hooking a headlock and Neidhart whips him off as both men collide with neither going down. They collide again with Neidhart knocking Dynamite down only for Dynamite to catch him ducking with a kick, and Smith tags in as the Bulldogs hit a double tackle on Neidhart. They tease a test of strength with Neidhart getting a kick in and he grinds down on Smith, and Smith fights to his feet only for Neidhart to get a kick in and Smith again fights to his feet as Neidhart backs him against the ropes. Neidhart gets a knee in only for Smith to flip over him and he hits a dropkick on Neidhart, and Bret tags in and they lock up with Bret getting a knee in on Smith. Bret stomps on Smith and rams him into Neidhart’s boot before pounding on him, and Neidhart tags in and they hit a double back elbow on Smith before Neidhart gets a shot in. Bret comes in and goes up to the middle rope as Neidhart puts Smith across his knee and they hit a double team on Smith, and Neidhart hits a headbutt on Smith and pounds on him. Smith ducks a shot only for Neidhart to get a kick in and he holds Smith up as Bret hits a dropkick, and Neidhart pounds on Smith and hooks a front facelock on before tagging Bret. Bret kicks at Smith repeatedly only for Smith to escape a backbreaker attempt and he hits a slam on Bret only to collapse to the mat, and Bret pulls Smith away from his corner and stomps on him before hitting a backbreaker for a two count. Smith ducks a shot and hooks a crucifix on Bret for a two count as Neidhart breaks the pin up and Bret hits an atomic drop on Smith, and Bret grabs Smith by the hair and lifts him up in the air before slamming him to the mat. Neidhart holds Smith up from the apron as Bret charges at him only for Smith to move and Bret hits a high knee on Neidhart that knocks him onto the commentary table, and Dynamite gets the hot tag as Neidhart rolls into the ring and Dynamite whips Bret into Neidhart. Dynamite hits a stiff hooking clothesline on Bret and a headbutt on Neidhart before hitting a backdrop on him, and he grabs Bret by the hair and hoists him up in the air before slamming him to the mat. Dynamite hits a falling headbutt on Bret and then he drops a knee on him before whipping Bret chest first into the corner, and he again drops a knee on Bret for a two count as Neidhart again breaks the pin up. Dynamite goes up top and hits a missile dropkick on Bret before tagging Smith who hoists Bret up and hits a running powerslam for a two count as Neidhart breaks the pin up yet again. Smith hooks a small package on Bret for a two count as Neidhart again comes in and breaks the pin up, and Smith escapes a slam attempt only for Bret to avoid a rollup attempt as he sends Smith through the ropes to the outside. Neidhart pounds on Smith as Dynamite comes in and kicks at Bret as Neidhart rolls Smith back into the ring, and Bret trips Smith up and hooks a Boston crab on only for Dynamite to break the hold up. Neidhart comes in and hooks the Boston crab back on as Bret rolls outside only for Dynamite to again break the hold up, and Neidhart drops an elbow onto Smith’s ribs before hooking another submission on. Smith fights to his feet and breaks the hold before escaping a slam attempt and he hooks a backslide for a two count as Bret now breaks the pin up, and Neidhart chokes Smith on the mat and tags Bret who kicks at Smith and drives the elbow into his head. Bret goes behind Smith and attempts a rollup only for Smith to roll through for a two count and Bret rolls through again, and Bret pounds on Smith and chokes him on the rope. He snaps him to the mat only for Smith to roll to his feet and he hits a dropkick on Bret that sends him to the apron, but Neidhart pulls Smith away from his corner as Bret drops an elbow and hits a legdrop on Smith. Bret rams Smith into Neidhart’s knee and tags him in as he pounds on Smith who tries to catch him with a sunset flip, but then the bells sounds indicating that we have reached our curfew and the match ends in a draw.

The match itself was pretty good as both teams worked hard and put on a solid match, though I don’t know if I would’ve made it the main event on this night. Again, it was a good show of faith to these guys to have them go on last, but it became clear that they were just in that spot to fill the remaining time until the curfew. This was a case where one of the hotter feuds showcased on this night could’ve been the main event like the Piper/Orndorff match, especially since that match went just under 9 minutes and this match could’ve a nice midcard anchor match. It was very interesting seeing a regular tag match here with the champions involved, but again it was a good showcase for two teams who were clearly being groomed for potential runs at the top. Obviously since all four men trained with each other and worked in Stampede together, they showed some pretty good chemistry here and put on a stiff tag match that again deserved more time and not just used as a throwaway to fill the end of the show. The crowd was into the match though they did die off a bit for certain points of the match, and then they completely check out when the curfew comes and they file out of the arena. The match ends with no winner as the night ends on a curfew draw, but you know that there was more to come from these two teams.