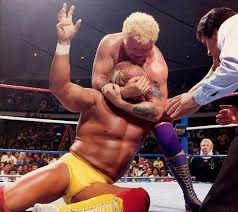 So we are now just about two months removed from one of the biggest shows in company history with Wrestlemania III and the question now was where some guys were going to go following that show. It was pretty clear coming out of that show and our most recent Saturday Night’s Main Event that Hulk Hogan was going to be continuing his feud with Andre the Giant due to the controversy surrounding the ending of that match. However, what many didn’t know was that Andre was going to be out throughout the summer due to having back surgery so Hogan would need to keep busy with various other feuds throughout the spring into the summer. Even though Andre would be out, Hogan could continue his ongoing feud with Bobby Heenan as Heenan could just pick one of his other Family members to try and take the title from Hogan. One of those members gets a chance here as Hogan would begin a feud with Harley Race, who was coming off winning his feud at WM III against the Junkyard Dog and was continuing to gain steam as the “King”. This was an interesting feud to have since I don’t think many knew of the long standing rumor that when Race was working in Kansas City with the NWA and the WWF ran a show there, Race threatened to show up and break Hogan’s legs though it’s unsure if this has been proven true or not. Regardless, Race was now in the WWF and surprisingly becoming one of the top heels though he could still work solid matches, and I thought it was a nice reward for him to be given a title feud with Hogan on the house shows.

Following WM, Hogan would actually continue to feud with Kamala on the house shows while Race faced various opponents which he would usually win, and Hogan and Race would have their first match in Boston on May 2nd with Hogan winning clean though Race beat him down after the match. They would face off again on May 8th with Hogan winning again and then on May 9th in Philadelphia, Hogan would win again though Race once again beat him down after the match. Hogan would defeat Kamala one more time on May 14th and then Hogan would defeat Race again on May 15th, and they would face again the night before in Toronto with Hogan winning though Race again beat him down after the match. One key note to make of those matches is after the beat down, Hogan would challenge Race to Death Matches in that town while vowing to quit wrestling if he lost. It was pretty cool seeing this feud play out like that in that even though Hogan was winning, Race would get his back to the point that you would want to see Hogan destroy him in a rematch and it would be interesting to see if they work the same formula here at MSG.

After working commentary for most of the show, Bobby leaves the table and joins Race at ringside as Race was red hot as a heel, and then the roof blows off MSG as Hogan comes out to a big pop from the crowd. The two men lock up to start with Race getting a knee in and he pounds on Hogan before hitting a headbutt, and he continues to pound on Hogan and hits a second headbutt only for Hogan to reverse a whip into the corner and he splashes Race. Hogan hits a clothesline that sends Race over the top to the floor and he pulls Race onto the apron before clotheslining him back into the ring, and Race begs off as Hogan taunts him by mockingly bowing to him only for Race to catch him with a headbutt to the ribs. He sends Hogan through the ropes to the outside though Hogan quickly returns to the ring, and Race nails him coming in and knocks him down before dropping a pair of knees on him for a two count. He pounds on Hogan and drops an elbow on him for a two count before ramming the knee into Hogan’s head, and he drives the knee into Hogan’s throat repeatedly only for Hogan to block two shots as he pounds on Race. He nails a running elbow on Race and knocks him down before pounding on him, and he hits a big boot that sends Race through the ropes to the outside and Hogan goes outside as well as he pounds on Race. Race rakes the eyes and rams Hogan into the guardrail before knocking Hogan to the floor, but Hogan avoids a falling headbutt as Race hits the floor and Hogan throws him back into the ring. He drives the elbow into Race’s head and hits a slam only to miss the elbow, and Race hooks a sleeper on Hogan who tries to fight his way out only for Race to take him to the mat and continue to grind down on him. Hogan fights to his feet and breaks the hold before knocking Race down twice, and he catches a kick attempt and knocks Race down twice before hitting a clothesline and he drives the elbow into Race’s head. He pounds on Race in the corner only for Race to catch him with a headbutt, and then he hits a trio of headbutts on Hogan which busts him open as Race hits another pair of headbutts which finally knocks Hogan down. Race goes up top only to miss the diving headbutt which stuns him long enough for Hogan to hook a rollup which gets the three and Hogan retains the title. After the match, Race regroups on the outside with Bobby who puts the crown on his head as Hogan poses for the fans, but then Race comes in from behind and nails Hogan in the face with the belt. He drapes the belt across Hogan’s chest and taunts the crowd as Bobby puts the crown on again, and they head to the back as Hogan recovers in the ring and is helped to the back. Then in a cool touch after the Women’s Title match, Hogan comes back out with a bandage around his head as he challenges Race to a no holds barred rematch next month and vows to quit wresting if he loses.

The match itself was pretty decent as both men worked hard for the time they got and put on a solid title match though it does feel a bit of a step down from previous title matches that Hogan has had at MSG. You knew that they were setting up for a rematch at the next MSG show so I’m fine with what they did in the match, but you thought that it could’ve been slightly better given the biggest star in the WWF at that time facing one of the all-time greats in NWA history. I did think that Race was effective with his offense and I thought it was interesting that the headbutt was his main weapon in this match, and I love how he used the series of headbutts to make Hogan bleed which wasn’t seen much at that time. Again, it seemed like the match was slightly rushed since it was just under 8 minutes and it probably could’ve been a few minutes longer, but like I said you knew they were just building towards a rematch the next month. But saying that, if they were going to have a rematch it was very weird to see Hogan win clean as usually the heel would win by DQ or countout to set up that next match and now that we’ve seen Hogan pin Race clean, how would that effect the rematch though they did try to build it with Hogan adding the stipulation of quitting wrestling to maybe add some intrigue. The crowd was hot for the match like they usually are for Hogan matches and they popped big for Hogan when he won, though they are pissed off after Race attacks him after the match. Hogan retains the title over Race, but Race gets the last word on this night which shows that this issue is not over yet.