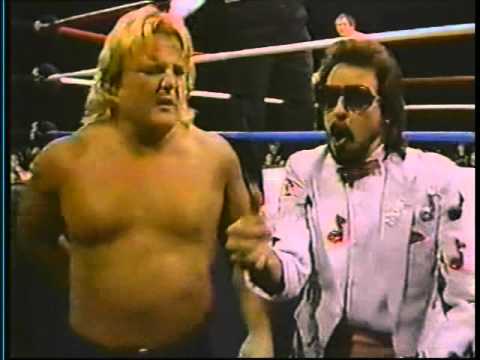 Greg “The Hammer” Valentine (w/ “Mouth of the South” Jimmy Hart) vs. Tito Santana in a Lumberjack match for the WWF Intercontinental Championship

As mentioned, one of the hotter feuds of 1985 for the WWF was the feud between Greg Valentine and Tito Santana for the Intercontinental Championship. It was a very hot feud that would main event house shows that didn’t include the WWF Champion Hulk Hogan and considering that TV was still not a focal point, it was interesting to follow this feud on the house show circuit. After being the main event at the January MSG house show, we don’t see these two face off in February at War to Settle the Score though it would headline the other house show that took place that same night. This was an interesting time in history as we were back in the Garden for this night only to return in two weeks for what looks to be their biggest event ever in Wrestlemania. Considering how heavy that show was being hyped on TV and the house shows, it was interesting that this feud had a showcase here and not at that show but I guess they felt the feud would continue and didn’t want to blow it off there.

The feud between Valentine and Santana continued as I mentioned since their last MSG encounter in January, and they would work the house show circuit with Santana typically winning the matches by countout or DQ which results in Valentine constantly escaping with the IC Title though there were instances where Valentine would beat Santana clean. As a result when the rematch was announced for this show, it is announced that it will be a Lumberjack match to ensure that there is a clear cut winner with no shenanigans. With a stipulation like this that looks to see an end to this feud, I again question the decision to have this here and not at WM unless they thought it would end up overshadowed by what the main event would be along with some other top matches. So in a way, maybe it was good to have it here so that it could have its own stage to shine on and it felt that this would be the end of the feud so you wondered if Santana would finally regain the title or if Valentine would retain and move on to a new challenge.

Much like their last encounter in January, the crowd at MSG was a buzz for this match especially after what happened earlier tonight when the WM main event had their moment in Piper’s Pit. Gorilla and Gene do a great job putting this match over as the lumberjacks come out, and they include Big John Studd, King Kong Bundy, Matt Borne, the Junkyard Dog, Barry O, Ricky Steamboat, Jimmy Snuka, Rocky Johnson, Charlie Fulton, and Terry Gibbs so there was some good starpower surrounding the ring. Santana is still extremely popular with the crowd as he gets a great pop while Valentine was cooking as a top heel as the MSG crowd is all over him. Valentine gets a cheap shot in on Santana to start the match and he pounds on Santana before knocking him down, and he drives the elbow into Santana’s head as Santana fights to his feet only for Valentine to rake the eyes. Santana ducks a shot and hits a clothesline on Valentine before stomping on him, and he pounds on Valentine and rams him into the buckle as Valentine flops to the mat. Valentine rolls outside to regroup as Studd and Fulton try to assist him only for Steamboat to come over and push him onto the apron, and Santana pounds on Valentine and knocks him back to the floor as the lumberjacks throw him back in. Valentine begs off and Santana catches a kick attempt before hitting an atomic drop and a running kneelift, and Valentine steps outside again only for Bundy and JYD to grab him and throw him back into the ring.

Santana pounds on Valentine in the corner only for Valentine to rake the eyes and he hits an atomic drop on Santana, and Valentine drops an elbow on Santana and pounds on him only for Santana to battle back and he stomps on Valentine in the corner. Santana sets Valentine up for a piledriver only to slam down on the back of his head and he tries to pull him to the center of the ring, but Valentine grabs the rope and rolls outside as Jimmy tries to take him to the back only for the face lumberjacks to grab him and force him back in the ring. Santana slams the back of Valentine’s head into the mat and drives a knee into his face, and Santana goes up to the middle rope and drives the elbow into the back of Valentine’s head for a two count. Santana slams Valentine’s head into the mat and pounds on him as Valentine again slides out of the ring, and he tries to escape into the crowd only for Steamboat to pick him up and toss him back into the ring. Valentine again begs off from Santana only for Santana to pound on him in the corner, and he whips him into the other corner only for Valentine to catch Santana with a knee to the face for a two count. Valentine drives the knee into Santana’s ribs for a two count and then he drops an elbow on him for a two count, and the crowd tries to rally Santana as Valentine picks him up and again knocks him down to the mat for a two count. Valentine hits a headbutt to the ribs of Santana and slaps him in the face before stomping on the knee, and Valentine hooks a submission on Santana who manages to fight his way out of the hold.

Valentine recovers first and kicks at Santana’s knee before stomping on him and choking him on the mat, and Valentine tosses Santana to the outside where Studd and the heel lumberjacks quickly toss Santana back into the ring. Valentine stomps on Santana and tosses him out to the apron, and he tries to kick him to the floor as the face lumberjacks try to help him only for Valentine to pull Santana onto the apron. He pounds on Santana who falls into the ring as Valentine goes up to the middle rope and drops an elbow on Santana, and he drops a knee on Santana for a two count before slapping him in the face and driving his knee into Santana’s knee twice. Valentine attempts a Figure-4 only for Santana to hook a small package for a two count and he tries to fight back, but Valentine pounds on him and knocks him down before dropping an elbow on him for a two count. Valentine pulls Santana up by the hair and pounds on him in the corner only for Santana to press Valentine up with his feet and drop him on the buckle, and Santana starts to fire up as the two men trade blows with Santana taking control and he knocks Valentine down. Valentine tries to crawl out of the ring only for Santana to pull him back in and he gets a shot in before hitting a suplex for a two count, and he drives the knee into Valentine’s face twice and stomps on him before attempting the Figure-4 only for Valentine to pull him to the mat. Valentine again rolls outside and tries to head to the back only for the face lumberjacks to grab him and throw him back into the ring, and Santana knocks Valentine down with a forearm and finally hooks the Figure-4 on only for Studd to pull Valentine to the ropes from the outside to force a break as Jimmy distracted the ref. Santana lunges at Studd and pounds on him only for Valentine to nail him from behind, and he pounds on Santana who battles back and they trade blows with Santana taking control. Valentine ducks a shot and hooks a headlock as Santana whips him off and they clock heads with Valentine falling on top of Santana, getting the three and retaining the title.

The match itself was very good as both men worked hard and put on a fun, hard-hitting title match. As we saw back in January, the chemistry between these two men has grown since they started feuding back in the fall and it continues to get better here. You could tell that they were pretty friendly with each other behind the scenes and didn’t mind working stiff with each other as they laid in some pretty hard shots. I thought the Lumberjack stipulation worked here to play off the last match where Valentine took the countout loss, and they worked it well as the heel lumberjacks assisted Valentine while the face lumberjacks kept forcing him back in. As I mentioned, Gorilla and Gene did a good job in calling the match though there were times where they a bit over the top in their commentary. It was a bit weird to see Studd get involved as I wondered if they may have been setting up a feud between him and Santana, but then again with the ending it seemed like this feud may be continuing even though Valentine did pin Santana somewhat clean. The crowd was red hot for the whole match and were completely behind Santana, but they are clearly not happy when Valentine gets the win. Valentine retains the title over a game Santana partially thanks to an assist from Studd, and you did wonder if this feud would end up continuing as we head into what looks to be one of the biggest shows of all time.