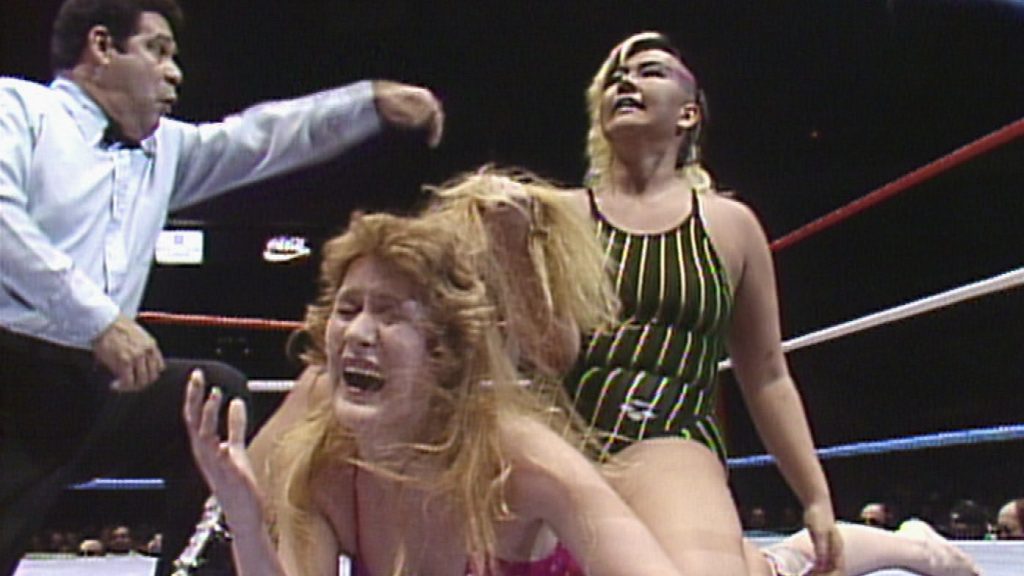 One thing that has always been a common theme throughout the history of professional wrestling is that the sport is big in many countries aside from the USA, and there is no country that holds wrestling in higher regard than Japan. Aside from baseball, there is no bigger sport celebrated in Japan than wrestling, and the 1980s may be the hottest period in its history. Japan has had a long line of men that have had great success around the world and they are also one of, if not the only country that has produced many women’s wrestlers as well. While the 1980s were not the best period for women’s wrestling in the USA, it was flourishing in Japan as numerous talents were gaining momentum and showcasing their skills. Two such ladies who were becoming a solid team was the combination of Bull Nakano, who many would know better for her run in the mid-90s, and Dump Matsumoto who served as Nakano’s trainer and mentor. They were known as the Devils of Japan and had a long feud in Japan with the Crush Girls, Lioness Asuka and Chigusa Nagoya and they were brought in for this show at MSG for a showcase match against the young team of Velvet McIntyre and Linda Gonzalez. By sheer coincidence, the Crush Girls would also be featured on this night in a match against Leilani Kai and Penny Mitchell and this was a very rare instance that an MSG show would feature not one, but two women’s tag matches. McIntyre was pretty much working as a solo star after being one half of the Women’s Tag Team Champions with Princess Victoria, and she was set for a Women’s Title match against the Fabulous Moolah at Wrestlemania 2 so it was a bit weird to see her thrown together here with Gonzalez for this showcase match for the Japanese contingent.

McIntyre and Gonzalez hardly get any reaction from the crowd, which was unusual since McIntyre was pretty well known by that point, and Nakano and Matsumoto don’t get much of a reaction either as Matsumoto comes out dressed as a samurai which looks really bizarre and it’s also weird seeing Nakano without what would become her trademark spiked hair as she looks like a punk rock chic. Nakano shows off her skill with the nunchuks as Gorilla and Jesse have a difficult time pronouncing their names, and it would be interesting to hear them have to call this match. McIntyre starts off with Matsumoto and McIntyre avoids her twice before surprising her with a rollup for a two count, and then Nakano tags in and they lock up with McIntyre working on the arm and she takes her down only for Nakano to kick her away. They lock up with McIntyre going back to the arm only for Nakano to yank her to the mat by her hair, but then McIntyre ducks a shot and leaps over Nakano before hitting a high crossbody for a two count. Nakano tosses McIntyre to the mat by her hair and tags Matsumoto who hooks a headlock and grinds down on McIntyre’s face, and she knocks McIntyre down and forces a tag to Gonzalez as Matsumoto flips her over the top into the ring. She hits a big clothesline on Gonzalez and then she hits a slam as Nakano goes up to the middle rope, but she misses the sitdown splash only for Matsumoto to choke Gonzalez from the apron. Nakano stomps on Gonzalez and hits a clothesline for a two count before choking her on the ropes, and she rakes Gonzalez’s face across the top rope and rams her into Matsumoto’s knee. Nakano slams Gonzalez’ head into the mat and chokes her before picking her up and knocking her down again, and she kicks at Gonzalez as Matsumoto tags in and she hoists Gonzalez onto her shoulders and slams her to the mat. Gonzalez tries to make the tag to McIntyre which she does though the ref misses it and he forces McIntyre back out as Nakano comes in and hooks a front facelock, and she whips Gonzalez into the corner only for Gonzalez to catch her with a pair of boots to the face. Nakano avoids a dropkick only for Gonzalez to avoid the legdrop and she pounds on Nakano who no-sells her shots and she knocks Gonzales down, and she tosses Gonzalez to the mat only for McIntyre to make the tag though Nakano grabs her and tosses her to the mat by her hair. She hits a pair of snapmares on McIntyre and tags Matsumoto who goes up to the middle rope as Nakano hits a slam, and Matsumoto hits a sitdown splash on McIntyre and works on the arm while keeping her from tagging Gonzalez. McIntyre twice manages to tag Gonzalez only for the ref to miss it and he forces Gonzalez back out as Nakano comes in and continues to work the arm, and Matsumoto comes in and they hit a double clothesline on McIntyre only for McIntyre to duck a second double clothesline though they catch her on a high crossbody and slam her to the mat. Nakano pulls on McIntyre’s hair and stretches her out before ramming her into the buckle, but then McIntyre surprises her with a dropkick and tags Gonzalez who fires up with a pair of dropkicks on Nakano for a two count. McIntyre tags in and they hit a double dropkick on Nakano as Matsumoto tags in and McIntyre hits a dropkick on her, and Matsumoto rolls outside to regroup as McIntyre drags Nakano back into the ring and she and Gonzalez hit a double back elbow on Nakano for a two count. Nakano recovers and rams Gonzalez into the buckle before tagging Matsumoto who attempts to hit a clothesline only for Gonzalez to botch it badly, and then she hits the clothesline on Gonzalez before hoisting her up and doing an airplane spin before slamming her to the mat and hitting a falling headbutt which gets the three and the Japanese team win the match.