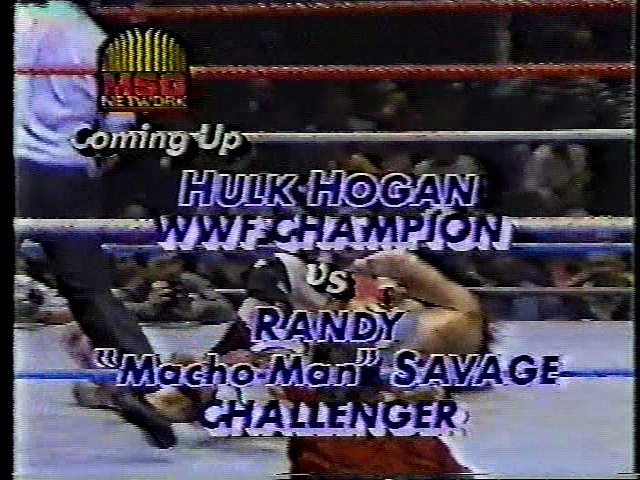 So as we now officially begin the year of 1986 with our first MSG house show of the year, it was interesting to see how things would play out when we ended 1985. At our last house show, we finally saw the confrontation between Hulk Hogan and Randy Savage for the title and it certainly didn’t disappoint with Savage getting the shocking win by countout. You knew that after that match, these two would more than likely face off again as we were continuing to build towards the second WM and we weren’t quite sure yet as to who would face Hogan at that show. Even though Savage was still involved in another feud for a different title and was about to begin a very interesting feud on TV, it was still intriguing to see Savage fight for the main title and if he could be able to dethrone Hogan to become champion. As for Hogan, he was still bouncing between feuds around the house shows and on TV as again he had no specific feud for WM, but this mini-feud with Savage was good for him as he was able to showcase how good he really was and that he could hang with Savage.

Since the last time these two faced off back on 12/30 at MSG, these two would mainly stay apart from each other as Savage continued his feud with Tito Santana for the IC Title while Hogan would bounce between certain guys though he was mainly focusing on members of the Heenan Family. They would end up facing each other on 1/19 in Richfield with Hogan winning by countout, and then they would face off again on 1/24 from Houston with Hogan again getting the win in the same manner. As we were heading back into MSG on this night and it was announced that the two men would face off again, you knew there would be a lot of anticipation for the match and if either Hogan gets his win back or Savage can win the title this time.

Once again much like the previous month, this match is put in the middle of the show and not the main event which was very interesting though the match that was the main event was a pretty hot feud so it deserved the spot. Savage was red hot as a heel as he comes out with a lot of confidence after getting the win last month, and then Hogan gets the big pop from the crowd as they almost blow the roof off of MSG. An interesting note is Elizabeth receiving a bouquet of flowers and Savage destroying them out of anger, and another note is Jesse mentioning that Hogan may be getting worn down by his hectic schedule and Savage could surprise him. I thought that Gorilla and Jesse have really gelled well as a commentary team as Jesse was completely pro-Savage by this point while Gorilla continued to play it down the middle. Savage wastes no time and stomps on Hogan as he slides in the ring to start the match, and Savage drives the elbow into him and tears at his shirt before raking the eyes. Savage goes up top and hits an axehandle on Hogan before stomping on him, and he tears at the shirt and chokes Hogan with it before grabbing the title and he nails Hogan in the back twice with it. Savage goes up top and nails Hogan again with the belt before getting one more shot in as Elizabeth gets on the apron and pleads for him to stop, and Hogan starts to fire up and pounds on Savage before putting his sunglasses on and knocking him down repeatedly. Hogan chokes Savage with his headband and then he hits an atomic drop before mocking Savage and knocking him down, and Hogan throws Savage to the outside before going out himself and he hoists Savage onto his shoulder before ramming him into the post which busts him open badly. Hogan pounds on the open wound and throws Savage back into the ring where he continues to pound on him, and then he hoists Savage up in a choke and slams him to the mat as Elizabeth gets on the apron. Hogan gets distracted by Elizabeth and he blows her a kiss before turning back to Savage who sends him through the ropes to the outside, and Savage kicks at Hogan from the apron and rams him into the post before going up top and hitting an axehandle on Hogan. He throws Hogan back into the ring before going up top again and hitting another axehandle on Hogan, and he knocks Hogan down with an elbow before going up top again and hitting the flying elbow for a two count. Hogan starts to fire up as he no-sells Savage’s shots and he kicks at Savage before whipping him into the corner and splashing him, and Savage tries to roll outside only for Hogan to stop him and he hits a big elbow on Savage. Savage again tries to roll outside only for Hogan to grab him and he hits the big boot on Savage, and he again prevents Savage from going outside only to toss him through the ropes to the outside anyway. Hogan goes outside and rams Savage into the apron before hoisting him onto his shoulder again for a ram, but Elizabeth prevents him from doing so twice which allows Savage to slide off his back and he rams Hogan into the post and the steps. Savage manages to roll back into the ring as the ref counts Hogan out and Savage gets the win by countout, but again Hogan retains the title as a result of the countout. After the match, Savage tries to crawl out of the ring only for Hogan to grab him and he hoists him up in a bearhug before ramming him into the corner, and he rams Savage into the other corner before hooking a bearhug on. Several other wrestlers come out and eventually pull Savage out of the hold as they try to keep them separated, but then Savage breaks free and gets a shot in on Hogan before bailing out of the ring and heading to the back. The wrestlers keep Hogan at bay and they eventually head to the back as Hogan stays in the ring and he paces around with the belt before heading to the back.

Overall, the match was a lot of fun as both men went all out for the short amount of time that they were given and put on a really frenetic title match. You knew that after the way their previous match back in December ended, there was no other way to go with this match than as a fast-paced brawl where Hogan wanted revenge for losing and Savage was now trying to survive while other trying to take the title. From the moment that Hogan rushed out to the ring and Savage jumped him, you knew these two men would take things to a different level as Hogan pretty much destroys Savage which included Savage getting bloodied though it was hard to see with his hair being in the way most of the time. I don’t think that they had to kill Savage’s finisher off again after doing the same thing the previous month, but it’s just a minor detail as you could say that Savage was so weak that he didn’t get the full effect. I like Gorilla and Jesse on commentary here as Jesse is completely behind Savage and vilifying Hogan for his tactics during the match while overlooking Savage using the title at the beginning of the match. I also thought it was weird that they did another countout victory for Savage as it probably made more sense for Hogan to get DQ’ed out of anger, but in a way it makes sense because you knew there would be a third match and the gimmick used would end up paying off the two countout decisions. The crowd was red hot for the match and Hogan, but they are again pissed off when Savage is announced as the winner though they do pop when they learn Hogan is still champion. Savage gets another countout win over Hogan though Hogan once again leaves with the title, but you knew that this issue is still not over yet.