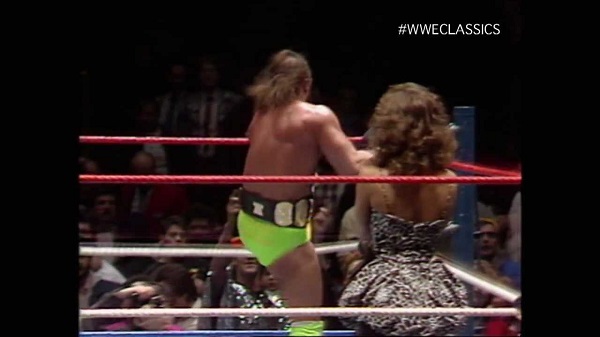 So as we come to the final MSG house show for the year of 1988, it is pretty safe to say that this year ended up being one of the better years for the WWF. This year saw two more big shows added to the calendar with the Royal Rumble and Summerslam, and the roster was pretty stacked on all levels especially in the tag division. It would also be pretty safe to say that Randy Savage has had a fantastic year as WWF Champion as he was involved in the hot feuds with Ted Dibiase and Andre the Giant for most of the year, and he has done a great job of being the champion even with Hogan back in the fold after taking some time off earlier in the year. As the year was coming to an end, there did seem to be some uncertainty with Savage as we saw at Survivor Series and there appears to be some slight tension within the Mega Powers. At the same time, he was being stalked by a pretty unlikely challenger in Bad News Brown who was continuing to gain steam and had been demanding a title shot for the last few months. It would be pretty interesting to see what would happen with Savage as 1989 began since it was beginning to look more likely that a showdown with Hogan was coming though it wasn’t completely obvious given some of the top heels they have at this time.

This feud began on the 11/26 Superstars when WWF President Jack Tunney appeared on the Brother Love Show and was confronted by Brown, and Brown demanded to know why he hasn’t received any title shots and accused Tunney of accepting “favors” from Miss Elizabeth. Tunney would shove Brown back and Brown threatened Tunney by grabbing him by the tie and forcing him to his knees, and the next week Savage and Elizabeth were on the Brother Love Show where they responded to Brown’s claims and said they weren’t true. On the 12/4 Wrestling Challenge, it was announced that Brown was fined $20,000 and nearly suspended only for Savage to object to the suspension as he wanted to face Brown in the ring. On the Christmas Eve edition of Superstars, Brown would win a squash and challenged Savage to come out and fight him, and Savage would come out and they brawled until officials broke them up. This was a pretty unique feud for Savage coming off some of the other feuds he had and this was a huge spot for Brown which showed the faith they had in letting him feud with the WWF Champion after only being the company for less than a year.

It was good that this match was the main event since nothing else on the show belonged in this spot, and Brown was red hot as a heel while Savage gets the big pop from the crowd and it’s funny they are still referring to him as the “undisputed” WWF Champion to this point. Savage wastes no time and attacks Brown from behind to start the match as he whips him into the corner and hits a back elbow, and he whips Brown with the belt and tosses him over the top to the floor before going outside himself. He drags Brown around the ring and rams him into the announce table before throwing him back into the ring, and he goes up top and hits an axehandle on Brown before stomping on him. He whips him into the corner only for Brown to catch him with a clothesline and he throws Savage over the top to the floor, and he goes outside himself and chases Elizabeth away before pounding on Savage and he returns to the ring. Elizabeth helps Savage roll back into the ring and Brown pounds on him before ramming him into the buckle, and he pounds on Savage and hotshots him on the top rope before stomping on him. He goes outside and drives the elbow into Savage’s throat before returning to the ring as Savage tries to battle back, but Brown rakes the eyes and pounds on him before hitting a headbutt and he stomps on him. Savage again tries to battle back only for Brown to get a shot in and he knocks him down, and he drops a fist on Savage who again tries to battle back and catches him with an elbow only for Brown to kick him to the mat. Brown hoists Savage up and puts him on the top rope before hitting a headbutt to the ribs, and he tosses Savage over the top to the floor again before going outside himself and he tosses Savage over the guardrail into the crowd. Savage climbs the guardrail back to ringside and Brown pounds on him before chasing Elizabeth around the ring until the ref keeps him away, and Savage tries to roll back into the ring only for Brown to pull him back out and he taunts Elizabeth though Savage reverses a whip and sends Brown into the post. Both men roll back into the ring and Savage gets a kick in before hitting a high knee to the back which sends Brown into the corner, but Brown catches him ducking with a shot and he sets Savage up only for Savage to avoid the Ghetto Blaster as Brown falls to the mat. Brown looks confused and charges at Savage only for Savage to backdrop him over the top to the floor, and then Savage hits a slingshot plancha onto Brown in a great spot and pounds on him before returning to the ring. Savage goes back outside and pounds on Brown only for Brown to hit a headbutt and he sets up for a piledriver, but Savage blocks it and backdrops Brown onto the floor before rolling back into the ring. Savage goes up top and hits an axehandle on Brown which sends him down the aisle and Savage rolls back into the ring, and he pulls Brown onto the apron and hits a suplex back into the ring for a two count. Savage goes up top only for Brown to nail him coming in and he teases another Ghetto Blaster as Savage drops down, and Brown nails him in the back and hits a Russian legsweep for a two count. Brown yells at Elizabeth and goes up top only for Savage to grab him first and toss him to the mat, and he goes up top himself only to miss the flying elbow and Brown pounds on him before going for a slam though Savage hooks a small package which gets the three and he retains the title. After the match, Brown argues with the ref about the decision and Savage holds the belt up in victory before nailing Brown from behind and sending him to the outside. Savage grabs the belt and holds Brown at bay until Brown heads to the back and Savage celebrates as Elizabeth gets in the ring and he hoists her up onto his shoulder, but just then Brown comes back out with a trash can as Savage puts Elizabeth down and goes after Brown. Brown gets a shot in and grabs the can before nailing Savage in the head with it and he stalks Elizabeth with it briefly, and he looks to hit Savage with it again only for the ref to stop him which allows Savage to get a shot in as Brown falls into the ref and the ref falls out of the ring. Brown rolls outside as Savage grabs the can and tosses it at Brown who heads to the back again and Savage stands tall, but a funny note is that Savage put the belt on upside down around his waist.

The match itself was pretty good as both men worked hard for the 10 minutes they got and put on a pretty solid matchup. As I had mentioned, this was a pretty interesting feud for Savage in that Brown was more of a brawler as opposed to a technical wrestler like Ted Dibiase, but as we’ve seen before Savage can adapt to any style and make it work well which he does again here. This was a big spot for Brown in that he gets a main event spot in MSG against the WWF Champion and he made the most of it, and they had really good chemistry with Savage even busting out a plancha which was rare at the time and something you never saw from Savage of all people which was really cool to see. It was a bit surprising that Savage got the clean win since usually it seemed like they would set up for a big rematch at the next show, but I guess this was just going to be a short term feud for Savage as he prepares for his next major feud as 1989 starts. The aftermath was also pretty hot with Brown bringing a trash can out which again made it seem like they were setting up for a rematch at the next MSG show, but as we’ll see this was pretty much the end of the feud between these two. The crowd was red hot for the whole match and popped big for Savage when he won. Savage gets the win over Brown and is still the champion as both men move on.