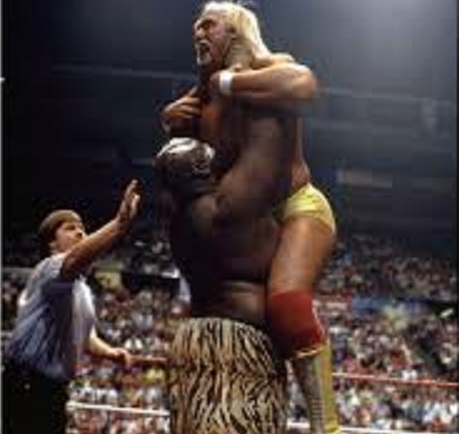 Hulk Hogan vs. Kamala (w/ Kimchee and the Wizard) in a No-Disqualification match for the WWF Championship

So as we head into 1987 proper (not counting the last SNME which was taped at the end of 1986), it was interesting to see where certain guys were going to go as we head to Wrestlemania III which at this point did not have a venue announced yet. Obviously, one of the men that you wondered where he would be going is the WWF Champion Hulk Hogan who was now as of this show 4 days away from celebrating his 3rd year as champion. He had already finished his feud with Paul Orndorff on TV by defeating him in the cage match on SNME, and now he was set to finish this brief house show feud he had going with Kamala. It has been a lot of fun seeing these different feuds play out through these MSG house shows and seeing Hogan face a wide variety of different wrestlers, and even though he hasn’t been around all the time you knew the crowd would be red hot when he would compete. On the flip side, this was pretty much the peak for Kamala when he was still a solid monster heel and he was built up enough that you could see him potentially steal the title especially after winning at the last MSG house show.

Since the last time they faced off at MSG, the feud between Hogan and Kamala would continue to play out on the house shows with Hogan usually winning by DQ though Kamala would win one no-DQ by countout which seems a bit odd to have. Aside from one house show where Hogan would defeat Jake Roberts, the two would start working no-DQ matches when 1987 started and on 1/11 in Toronto, the two would meet in a steel cage match with Hogan winning. One key note that we do have to mention is on the 1/17 Superstars that took place two days before this MSG house show, Hogan appeared on Piper’s Pit and was presented with a trophy by WWF President Jack Tunney for being champion for 3 years. During the presentation, Andre the Giant would make an appearance to offer his congratulations and he mentioned that being champion for 3 years is a long time before walking off, and little did anyone know that the seeds were being planted for one of the biggest matches in wrestling history taking place.

Kamala was still red hot as a heel as the MSG crowd showers him with boos while the roof nearly blows off when Hogan comes out as he gets a monster pop, and it was interesting that they put this match in the middle of the card again instead of the main event. In a really cool touch, Hogan comes out with his face painted like a savage to combat Kamala and it was always awesome to see Hogan do these types of things to put the match over even more. Kamala wastes no time and attacks Hogan right at the start when he gets in the ring, and Kamala takes the title off of Hogan and whips him repeatedly with it. Kamala whips Hogan into the ropes and winds up with the belt only for Hogan to duck the shot and he pounds on Kamala, and he picks up the belt and nails Kamala in the face with it. Hogan tears his shirt off and tosses it at Kamala before going outside and nailing the Wizard as Kimchee tries to get a shot in, but Hogan chases him into the ring only for Kamala to nail him coming in and he hits a headbutt on Hogan. The crowd chants “Hogan” as Kamala pounds on Hogan and he kicks at him, and he hoists Hogan up in a choke and tosses him to the mat before biting him in the face. Kamala hits a superkick on Hogan and continues to pound on him before knocking him down with a back elbow, and he rakes Hogan’s eyes and hits a slam before hitting the big splash for a two count. Kamala looks to go up top only for Hogan to crawl away and Kamala comes back down, and he pounds on Hogan and hits another slam only to miss a second big splash as Hogan rolls away. Hogan fires up on Kamala and hits a clothesline before biting him in the face, and Hogan takes the tape off his wrist and chokes Kamala with it before pounding on him. Hogan hits an atomic drop on Kamala and grabs the tape before choking him with it again, and he continues to pound on Kamala and hits a big boot that sends him through the ropes to the outside. Hogan goes outside and nails Kimchee and the Wizard while also pounding on Kamala before throwing him back into the ring, and then Hogan hits a big slam on Kamala only for Kamala to avoid the elbow. Kamala stomps and pounds on Hogan before biting him on the arm repeatedly and he continues to pound on Hogan’s arm, and then he confers with Kimchee as Hogan pulls some salt out of his tights and he throws it right in Kamala’s eyes. He goes outside again and knocks the Wizard down before taking his horn from around his neck and putting it on himself, and Kimchee nails Hogan in the back with his helmet which Hogan no-sells and he hoists Kimchee up and rams him shoulder first into the post. Hogan then gets back in the ring and nails Kamala in the head with the horn before hitting the legdrop which gets the three and he retains the title. After the match, Kamala regroups on the floor with Kimchee as Hogan mocks him and Kamala tries to get back in the ring, but Hogan nails him with the title and Kamala falls back to the floor as Kimchee and the Wizard help him to the back. Hogan poses for the fans as Andre the Giant comes into the ring and he picks up the title, and Andre looks at the title as Hogan notices him with the title and asks for it back with Andre tossing it back to him. Andre then leaves the ring and heads to the back as Hogan continues to celebrate with the title and poses for the fans.

The match itself was pretty good as both men worked hard and put on a good title match, but it felt a bit rushed as they only got 8 minutes to work with, which considering how hot it was it could’ve easily been given another 4 to 5 minutes. I thought that Kamala had been built up pretty strong as a solid contender for Hogan and again there was always the chance that they could’ve pulled a switch, but given how close we were to WM it was pretty obvious that Hogan was going to retain. I thought having the no-DQ stipulation made sense given how their last match ended, but they didn’t seem to go as far as they could with the stipulation as aside from using the title and the horn, they kept the match pretty straightforward. Had the match been a few minutes longer with more violence and had also been the last match and not stuck in the middle, this could’ve been a pretty great match but as is it ended up being just pretty good. But the big thing to come out of this match was when Andre came out and stared at the title before giving it back to Hogan, and it was pretty clear that we were potentially looking at what the main event for WM would be. The crowd was red hot for the match and popped for Hogan big when he won, and they were in awe when Andre and Hogan had their staredown and you could even hear some boos for Andre when he left. Hogan retains the title over a game Kamala and now Kamala would take a step back while Hogan awaits to see what Andre’s motives are.