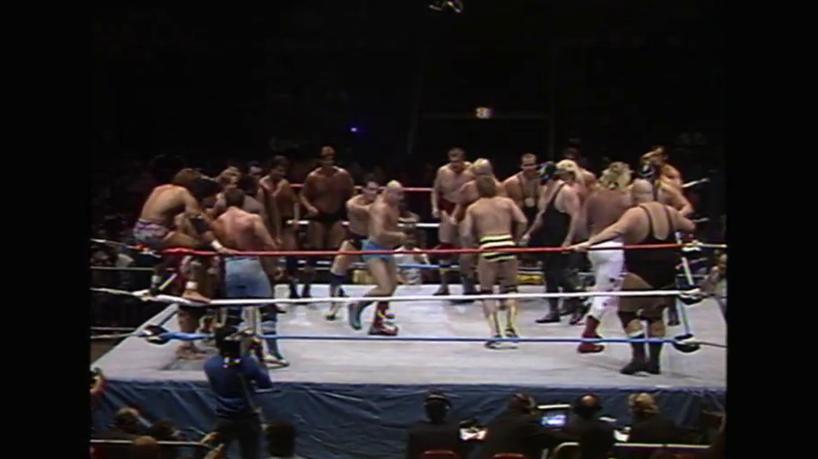 One of the things that I have found pretty interesting since we started doing the reboot of the Vaults is the lack of gimmick matches in this timeframe of the WWF’s history. In an era where almost every PPV features at least one gimmick match and these matches tending to be overexposed, this was a time where certain gimmick matches are much more rare which made them more special. One of those type of gimmick matches that we don’t see much of at this time is one of my favorite gimmicks matches and that is the battle royal. While it is not everyone’s favorite gimmick match, I’ve always had a fondness for this type of match as seeing all those guys in the ring at the same time was a sight to behold. Regular battle royals are always very fun and interesting, but on this night we kick it up a notch by having a battle royal involving tag teams. The aspect of having tag teams in a battle royal was very unique as you know longer have to watch your own back, but you also have to be mindful of your partner since if one was eliminated the whole team would be eliminated. It was also pretty interesting seeing another battle royal take place at MSG so soon since we last saw one back in August, but again having the tag teams involved made it feel different and it would be interesting to see how it played out.

There was no real build for this battle royal as the focus of this MSG house show was the special edition of Piper’s Pit which had Paul Orndorff and Bobby Heenan on as they kept the feud with Hogan hot while also setting up next month’s show. In a pretty cool twist, everyone involved in matches tonight prior to the battle royal were all in tag teams that would be included in the battle royal so most everyone would have to wrestle twice. It was announced that the winning team would earn $50,000 which was a pretty nice prize, but you do wonder why they didn’t include a title shot at the next house show to make it feel more important.

We have a pretty good collection of teams as we have 12 in total which means there will be 24 men in the match, and the teams include the tag champion British Bulldogs, the Hart Foundation, the Dream Team, the Moondogs, the Machines, the Rougeaus, the Killer Bees, Big John Studd and King Kong Bundy, the Iron Sheik and Nikolai Volkoff, the mismatched team of Mike Rotunda and S.D. Jones, and the team of Chief Jay Strongbow and Steve Gatorwolf. The Bulldogs get the biggest pop from the crowd while the other face teams got good pops and the heel teams get pretty good heat. I like how Gorilla right off the bat stated that Studd and Bundy were the favorites to win because of their size, and he also mentions that Strongbow was coming out of retirement to compete in this match which was pretty interesting. The 12 teams waste no time and brawl to start the match as several men try to corner Studd and Bundy, and Spot quickly gets thrown over by Super Machine and the Moondogs are eliminated in record time. Big Machine pounds on Bundy as Rotunda and Valentine try to double team Studd and Haku and Dynamite trade blows, and Neidhart chokes Jones on the ropes as Strongbow and Gatorwolf try to eliminate Sheik. Studd pounds on Big Machine as everyone continues to pair off and attempt double teams, and Blair hoists Sheik onto his shoulders and tries to dump him out as Haku pounds on Valentine in the corner. The Harts are tangled up with Dynamite and Jacques in the corner as Super and Rotunda pound on Volkoff, and Strongbow tries to avoid elimination as Sheik puts Rotunda on his shoulders and tries to dump him out. Studd pounds on Super in the corner as Bret is knocked down and several men try to dump Bundy only for Studd to make the save, and Tama is thrown over the top though he lands on the apron as Super rams Beefcake into the buckle. The Bees try to eliminate Bret as the Machines try to dump Neidhart and Jones pounds on a Rougeau in the corner, and Volkoff saves Sheik from being eliminated as the Harts double team a Machine until Brunzell grabs at Bret. The Bulldogs brawl with Studd and Bundy in the corner as Brunzell looks to eliminate Bret and Blair tries to eliminate Beefcake, and all these men continue to brawl as Sheik dumps Jones over the top and eliminates him and Rotunda from the match. Rotunda doesn’t realize that Jones was eliminated as he continues to pound on Bundy in the corner and Haku pounds on Studd, and Rotunda and Tama try to dump Bundy as the Rougeaus work to try and eliminate Studd and Rotunda finally leaves the ring. Sheik then dumps Gatorwolf over the top and eliminates him and Strongbow as Blair tries to dump out Bret, and Sheik and Volkoff work on Tama as the Machines pound on Studd and several men are tied up with each other in the corner. Super backdrops Sheik over the top and eliminates him and Volkoff as Bundy and Beefcake double team Haku, and Raymond hoists Bret onto his shoulders and tries to eliminate him as Sheik has been busted open from hitting the floor. Bret and Dynamite brawl as both men tumble over the top and both the Bulldogs and the Hart Foundation are eliminated in a big shock, and the two teams continue to brawl on the floor as the Rougeaus work on Bundy and Super pounds on Studd. Big and Blair try to dump Beefcake out as Haku tries to help the Rougeaus dump Bundy, and Super pounds on Tama as Big rams Beefcake into the buckle and the Bees double team Studd. Haku and Super trade blows as the Bees brawl with Studd and Bundy, and the Rougeaus pound on Valentine in the corner until he escapes as Super rams the Islanders’ heads together. Beefcake backdrops Brunzell over the top and the Bees are eliminated as the Dream Team and the Machines are tied up with Studd in the corner, and the Rougeaus and Islanders trade blows until Studd pounds on Jacques. The Machines and the Dream team brawl in the corner as the Islanders pound on Raymond, and Jacques battles back on Studd only for Studd to backdrop him over the top and the Rougeaus are eliminated. Tama pounds on Valentine in the corner until Valentine battles back as Beefcake kicks at Super and Big pounds on Bundy, and Super backdrops Beefcake over the top and the Dream Team are eliminated. The Islanders double team Super as Big hoists Studd up and tries to dump him only for Studd to hang on, and Bundy clotheslines Big from behind which sends him over the top and the Machines are eliminated. Now with only two teams left, the Islanders square off with Studd and Bundy and the Islanders charge at them only for Studd and Bundy to pound on them in the corners. Haku battles back on Studd as Bundy whips Tama into the other corner and hits the Avalanche, and Haku pounds on both Studd and Bundy only for them to double team Haku on the ropes and Studd holds Haku for Bundy only for Haku to move and Bundy clotheslines Studd over the top to the floor, eliminating them and the Islanders win the battle royal and the $50,000.

The match itself was pretty good as all 12 teams worked hard and put on a solid battle royal, which shouldn’t be surprising considering the amount of talent that was involved in the match. Considering that most of the men in the match competed earlier in the night, they still worked a pretty solid match even though it just went over 10 minutes so that they didn’t overwork themselves. Watching this match, it was pretty clear what the pecking order of the teams were as the Moondogs, Jones and Rotunda, and Strongbow and Gatorwolf were eliminated first with Sheik and Volkoff going after them. I thought it was a bit of a shock that the Harts and Bulldogs went out as early as they did, but it made sense since it was pretty obvious that this would be the big tag feud going into the end of the year and having them eliminate each other was a smart move. I like how Bundy and Studd were pushed as the favorites based on their size and the fact that they made it to the end push that theory, but in the end some miscommunication that we’ve see a few times over the last few months cost them in the end. I also thought that Gorilla, Alfred, and Okerlund did a decent job as a 3-man team as Gorilla and Alfred called most of the action with Okerlund getting his thoughts in sporadically. This was a pretty good win for the Islanders as this helped give them some good momentum after just debuting as a team, but again it was weird that they didn’t receive a title shot following this as they could’ve had a great match with the Bulldogs. The crowd was into the match and popped big for the Islanders when they won. The Islanders get the win in the tag team battle royal and are $50,000 richer as all 12 teams move on.

Be sure to leave your feedback on the 10/20/86 MSG show in the comments, to be read on-air during the Place to Be Podcast. This show is available on the WWE Network.