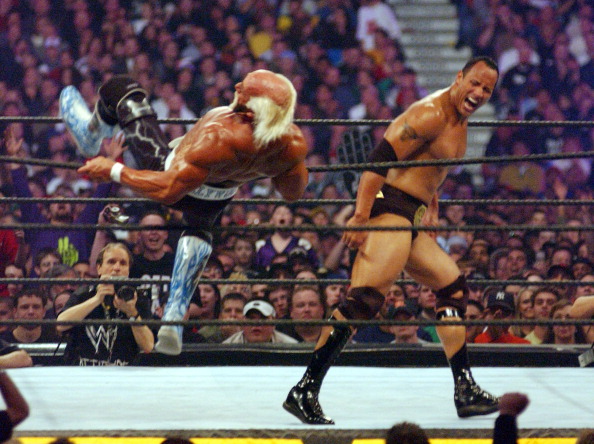 Hulk Hogan vs. The Rock

Collar and Elbow tie up

That is all of the non-basic strike moves that occurred in Hulk Hogan vs. The Rock from WrestleMania 18. Not too impressive sounding right? Where are the belly-to-belly suplexes, tombstone piledrivers, chain wrestling, chop exchanges, blood, multiple pinfalls, and other characteristics that are frequent in other classic matches? Instead we have the best crowd in wrestling history watching a true moment in time match. Hulk vs. Andre isn’t much of a match from WrestleMania III but it is one of the few matches in wrestling history that match the significance and historical perspective that this match feels like. Two true all time legends fighting in the ring is more infrequent than you imagine. In addition to the legend status these two have, how many times in wrestling have two true legends like this faced off for the first time? Warrior and Hogan at WrestleMania VI? Maybe Sting and Hogan at Starrcade 97? It is pretty infrequent and I would argue that as both competitors stepped into the ring on the night of March 17, 2002, Hollywood Hogan and The Rock were the two biggest stars in professional wrestling history that were about to have a first time matchup.

I have prided myself on having a rigid arbitrary ranking system. It seems silly but I do take pro wrestling seriously considering how much of my life has been consumed with it. I always call Savage vs. Warrior at WM VII the “worst” ***** match I have ever given” but as great of an emotional gut punch that match is, this match has the crowd reaction and overall aura to it. This match feels like a comic splash page come to life. Imagine this clash as Batman vs. Superman on any other combination of two larger than life icons coming together in one special moment. There are a few botches here and there but that means nothing in the overall context of this match. It is a magical moment and one of the top five matches in WrestleMania history.