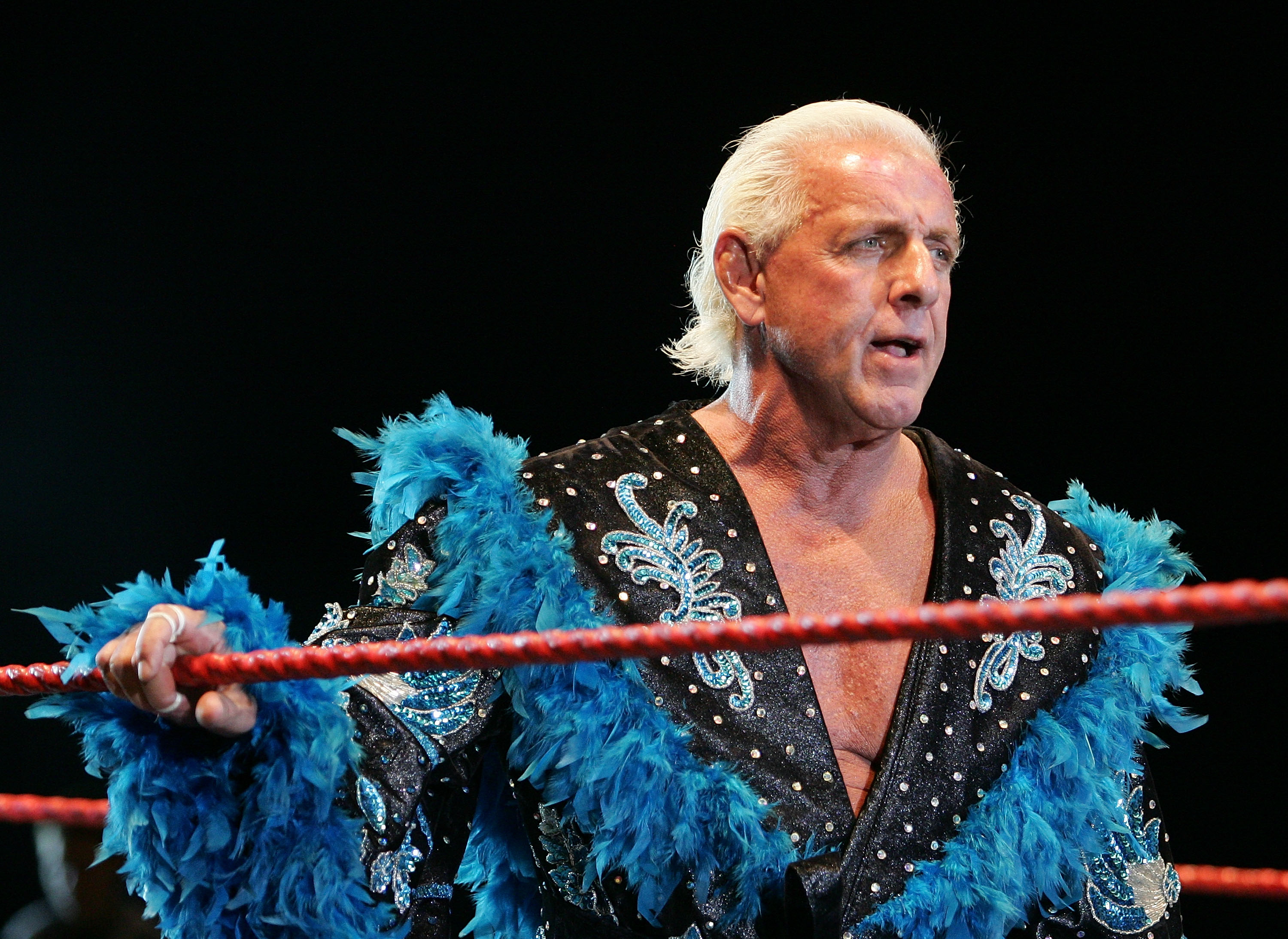 “Nature Boy” Ric Flair vs. Mick Foley in a 2 out of 3 falls match

When it comes to professional wrestling, we are at a point where even the most novice of fans know that the sport is pre-determined and scripted. One may say that the onset of the internet and dirtsheets helped further this in addition to Vince McMahon announcing on TV that they are sports entertainment. We watch on TV as two men are embroiled in a bitter feud either over a title or some other issue which finally plays out in a big-time money match, but for the most part we know there is no real life tension between the two. However, there are some cases where real life feuds break out and carry on beyond the TV screen and into reality. Whether it is about one man making more money than another or one man being pushed stronger than another, these personal feelings boil over and result in a heated rivalry that can play on screen as well as off.

One of the more interesting real life feuds that broke out in the mid-2000s was the war of words between Mick Foley and Ric Flair, two men who I think many average fans had no idea had heat with each other. The feud began somewhat innocently enough when Foley wrote in his first book about how he felt that while Flair was a great wrestler, he was a horrible booker as well. For those who may not know, Flair was the booker for WCW in 1994 when Foley was working in the tag division with Maxx Payne and Foley believes that Flair was booking him poorly. There was also extra heat on Foley after Flair heard about Foley spitting on the WCW Tag Team Title during his brief cross-promotional run with ECW. Flair would fire back at Foley in his book when he said that he doesn’t respect Foley due to becoming famous by falling off cages and bleeding around the world, and he went as far as to call Foley a “glorified stuntman”. Those in the know knew that there was still plenty of heat between these two and decided to have it play out on TV with the two having a feud.

The feud began on the 6/12 RAW the night after One Night Stand when Foley came out to talk about that night, but he was interrupted by Flair who said that he didn’t care about One Night Stand and wanted to talk about Foley’s comments directed at him. Flair said he didn’t respect Foley because he became famous by falling off a cage while he and many others had to earn their spot. Foley insulted Flair’s age by saying many younger fans don’t know about his past and that he could beat Flair with ease, and Flair challenged him right there only for Foley to deny the request citing that he was still too hurt from the previous night. He would then challenge Flair to a 2 out of 3 falls match at Vengeance to prove that he was the better wrestler, and Flair would accept the challenge. I thought that this was a great promo by both men as you could feel the tension between them and since there were only two weeks between One Night Stand and Vengeance, this brought the heat very well. Foley would get the last shot in on Flair when he cost him a match against Edge 6 nights ago on 6/19, and Flair was ready to get his revenge on Foley.

Before the match, Foley reads from Flair’s book which he calls a fictional book and brings up the “glorified stuntman” line, and he vows to wipe the ring of Flair with wrestling moves to gain more heat. I thought the 2 out of 3 falls stipulation was interesting and it helped play up the fact that Foley wanted to prove he could outwrestle Flair. Flair obviously gets a huge pop from his hometown crowd while Foley was still really hot as a heel though he does get a few cheers. The crowd quickly gets on Foley’s case with the “Foley Sucks” chant as the two men lock up and Foley hooks on a headlock before going behind Flair, but Flair turns it around and Foley grabs the ropes for a break. They lock up again with Flair grabbing the arm only for Foley to turn it around and work on Flair’s arm, but Flair regains control until Foley grabs the ropes again. They lock up again with Flair hooking a headlock and he trips Foley up before going back to the arm, and Foley again grabs the rope to force the break as Flair does a strut of confidence. I like this early work as Foley is trying to outwrestle Flair only for Flair to counter his every move with Foley having to use the ropes each time. Foley gets a shot in on Flair and pounds on him in the corner, and he mocks Flair’s strut before hitting the running knee in the corner. Foley then hits the double-arm DDT on Flair and pulls out Mr. Socko who is dressed up in a Flair wig and robe which looks absolutely awesome. Foley sets Flair up for the Mandible Claw only for Flair to grab Foley’s groin and he pounds on Foley, and Flair goes up top and actually hits the axehandle on Foley though he hurts his knee in the process. Foley hits a chop block on the knee and stomps on Flair before wrapping the knee around the ropes, and he pulls Flair to the center of the ring and drops an elbow on the knee. Foley mocks Flair and looks for the Figure-4 only for Flair to surprise him with a small package, getting the three and winning the first fall. That caught me off guard a bit as I didn’t remember the first fall being so quick, but it worked to further prove that Flair was still a step ahead of Foley.

Foley is clearly frustrated as the second fall quickly begins and Flair almost surprises him again with a small package for a two count. Foley hits a clothesline on Flair before tossing him to the outside. He rams Flair into the barricade and pounds on him only for Flair to reverse a whip and send Foley knees first into the steps, and Flair pounds on him before throwing him back into the ring. He continues to pound on Foley and knocks him through the ropes to the floor and Foley tries to escape into the crowd, Flair goes after him only for Foley to rake the eyes and backdrop Flair onto the floor at ringside in a nasty spot. He tears at Flair’s face and tosses him back into the ring as the crowd chants “Foley Sucks” again, and then he pulls out a garbage can and brings it into the ring. He charges at Flair with the can only for Flair to trip him up and hook the Figure-4 on, but Foley nails him with the can which draws the DQ and Flair wins in 2 straight falls. After the match, Foley again nails Flair with the can before going outside and pulling out the barbed wire baseball bat. Foley also nails Flair in the face with the bat which busts him open and Flair is bleeding badly. He rakes the barbed wire across Flair’s face and drives it into Flair’s face, and officials finally come out and force Foley to the back as they assist Flair in the ring.

This is a tough match to grade because on the surface it should be a pretty big deal to see these two go at it, but it ended up buried on this card which is funny to say given how light some of these RAW only shows have been. As mentioned, the heat for this was pretty good though it did feel a bit rushed since its only been two weeks since this feud really got going. That said, I thought that the story was pretty good of Foley trying to outwrestle Flair and failing, and he finally got so frustrated that he resorted to his hardcore tendencies and it cost him the match. It does suck that this match only had to be less than 8 minutes, but it was clear that this was just a teaser for something much bigger as the post-match beatdown shows since Foley just destroys Flair. Flair has had some bad gushers these last few years, but this has to be one of his worst to date as his whole face is just covered in blood to the point that it was pretty hard to watch. The crowd was hot for the match and Flair as well as getting on Foley’s case, but the ending just pissed them off completely. For a match that looked really good on paper, it ends up being a bit of a disappointment though as mentioned you knew that something bigger and better was going to come of this.