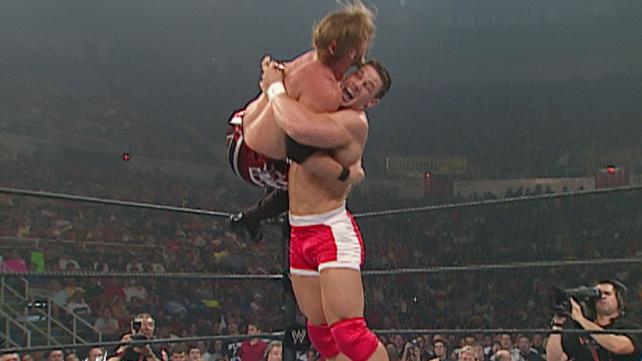 Here we are again with another PPV lacking a standout match for me to do my pre-viewing on. I have always viewed this PPV as a sum being better than any individual parts type of show. Nothing was extraordinary, but nothing was bad either making it enjoyable overall for a WWE summer outing. This is also right around the time when my fandom would wane for the biggest period in my life. I still watched here and there and kept up to some degree, but the days of me watching full Raws and SmackDowns were over. I had a drivers license and dates to go on. As a result, my knowledge of John Cena didn’t really start until the thugonomics gimmick was in full force in late 2003. I was deeply intrigued to see how polished he looked in this match up against a still reeling from his big push Chris Jericho.

Cena’s music is as generic as they come and his attire looks like he stole Lance Storm’s luggage. Jericho immediately grabs a chair and meets him on the entrance way but Cena is able to avoid the chair shot and then take control of the chair and do a shot of his own. The next two minutes of the match follow a cat and mouse approach with Cena reigning on top. Jericho keeps doing these sequences where the viewer is conditioned to think he is going to take over the match, only Cena is able to stay one step ahead of him. Jericho retreats to the outside and Cena blindly follows being the second person back into the ring, but he is able to avoid the onslaught of Jericho. Cena then catches Jericho in midair and delivers a spinebuster. I really liked the contrast that this played where now the viewer is conditioned to feel like Cena does really have Jericho’s number.

Jericho finally gains the advantage when Cena is jawing with the referee about a slow count. Jericho’s offense on top looks good especially the sliding dropkick to the face and his rabbit punches. Cena has a glimmer of hope but gets stopped with a breakdown. Jericho’s cockiness catches up to him as he struts up to the top rope. Cena capitalizes with a superplex. Cena hits a tilt a whirl slam(?!) for a nearfall. This leads into our ending sequence which is nothing short of amazing and full of counters and smart work by both men. Jericho gets a dropkick from the middle turnbuckle right to Cena’s gut. Cena fires back with a belly to belly and he is able to avoid the lionsault and get some pinning nearfalls. Jericho is finally able to gain control and hits the bulldog and lionsault but gets cocky one more time and wants to see Cena submit. Cena showing his resilience is able to counter the walls into a pinning combination and gets the upset win as he races to the back in record speed. Jericho is of course irate at these proceedings but has no one to blame but himself.

Debuts against established stars can be tricky in not making the established star look bad but also not totally burying the debuting newcomer either. This hit the perfect note of making Cena look smart to capitalize on every overconfident move Jericho executed. It is a shame the crowd, including our own Jordan Duncan, didn’t take to the match that much because they packed a lot of story into an under seven minute-match. Jericho should be commended for embracing this role still only four months after being the undisputed champion. I got serious 123 Kid vs. Razor Ramon vibes watching this match and the blue print was there already to see Cena as a big time prospect for the future.