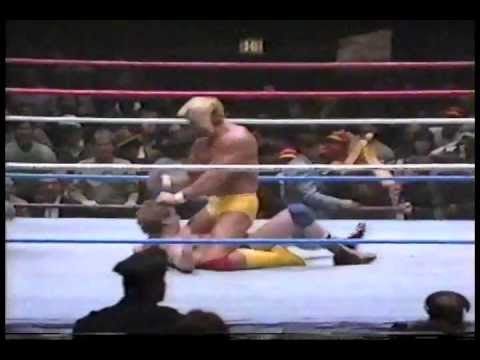 In 1984, the Rock and Wrestling Connection began between the WWF and MTV and it proved to be a very strategic move for both sides. Obviously for the WWF as it gave them mainstream publicity and helped further their move towards becoming a national company as opposed to being strictly territory. However, it was equally important for MTV as they had only been on the air for about 2 and a half years and showcasing wrestling helped build their audience as well. There was much cross promotion between the two sides mainly involving Cyndi Lauper who was essentially MTV’s spokesperson for the Connection as she would have Lou Albano in her music video for “Girls Just Wanna Have Fun” and she would manage Wendi Richter on a regular basis. In addition, Hulk Hogan started becoming a household name due to his charisma and look while on the other side, Roddy Piper was quickly becoming one of the most hated men in wrestling due to his dislike of MTV and rock music. You knew that the stage was being set for these two men to have a major showdown and it would go down in February of 1985 in front of millions of fans watching live on MTV.

The feud between these two began as mentioned previously when Piper began badmouthing MTV and rock music with Hogan taking MTV’s side, and at an MSG house show in December Piper cemented his status by smashing a gold record over Lou Albano’s head and kicking Cyndi Lauper to the mat. Needless to say, Piper was public enemy #1 in the fans’ eyes and in the eyes of MTV as Hogan began challenging Piper to face him, but Piper claimed he would only face Hogan if the WWF Title was on the line. Hogan would accept Piper’s demands and the match was set to air here on MTV, billed as “The War to Settle the Score” and we would hear comments from various wrestlers and rock stars who each backed either Hogan or Piper. This feud has been extremely hot as both men were rocking on all cylinders in terms of promos and heat, and this was a major match that could alter the course of wrestling forever.

I though the preshow with “Mean” Gene Okerlund and Allen Hunter did a great job in doing the final hype job for the match as they ran down the entire history of this feud from the beginning. We then cut to Madison Square Garden where Gene joins Gorilla Monsoon for commentary, and Piper comes out with his own band as the crowd is all over him with tremendous heat. Piper soaks the heat in as he comes out with a Hulkamania T-shirt and a guitar, and he is of course flanked by his bodyguard Bob Orton who comes out with a sling on his arm to sell his injury earlier in the night and Piper then smashes the guitar to show what he thinks of rock. But if you thought the heat for Piper was one thing, I thought the roof was going to blow off MSG when “Eye of the Tiger” blasted and Hogan came out to a huge pop and he was looking jacked as he greets his friend Mr. T at ringside. The heat was just off the charts here as both men get in the ring and they look like they are about to explode, and then they finally go at in and brawl to start as the crowd pops huge. Hogan rakes Piper’s eyes only for Piper to tackle him to the mat and they continue to brawl, and Hogan pounds on Piper in the corner before whipping him into the other corner and hitting a back elbow. Hogan hits a pair of slams on Piper before dropping a big elbow on him, and he bites Piper in the face only for Piper to reverse a whip into the corner and he splashes Hogan for a two count. Piper stomps on Hogan and tries to hold him down for a two count before stomping on him again, and he hits a double chop to Hogan’s throat before hooking a sleeper on Hogan as he takes him to the mat. Hogan fights to his feet as Piper jumps on his back only for Hogan to send him into the buckle to break the hold, but Hogan collapses to the mat and Piper recovers first as he pounds on Hogan and rakes the eyes. He chokes Hogan on the top rope with Orton trying to assist only for Hogan to pull Orton onto the apron and ram his bad arm into the post, and Hogan fires up on Piper and knocks him down as Piper begs off. The two men rake each other’s eyes with Hogan gaining control and he hits a clothesline as Paul Orndorff comes down to ringside, and Hogan hits an atomic drop on Piper and pounds on him only for Piper to get a shot in and the ref gets wiped out by Hogan. Piper pulls Hogan to the center of the ring as Orndorff goes up top and drops a knee on Hogan, and they stomp on Hogan as Lauper gets on the apron and both men surround her. Just then, Mr. T gets on the apron and Piper challenges him to get in the ring which he does as Orndorff goes outside, but then Orndorff grabs T’s leg and Piper gets a cheap shot in as they stomp on T. Just then, Hogan gets to his feet as does T and the two sides square off until Piper and Orndorff retreat from the ring, and officials and police officers come out and try to keep everyone at bay as Piper and his crew head to the back and Hogan celebrates with T as he is announced the winner by disqualification and he retains the title. After the match, Gene rejoins Allen and they have various interviews with Hogan, T, Albano, Lauper, Danny DeVito, Andy Warhol, Joe Piscopo, Billy Squire, and even Piper as you could tell that this score was not in fact settled.

The match itself was just an amazing spectacle as the in-ring action between the two may have been as basic as it could be, but everything surrounding the match more than made up for it. The whole crux of the match was to see Piper get his ass kicked by Hogan while also making Piper enough of a threat to take the title from Hogan, and the build was so well done to make this feel like a mega event that had to be seen. This would end up being a major success as the program did a ridiculous rating that is rarely seen anymore, and it would be a big step forward for both the WWF and MTV. Some might complain about the fact that the match ended with a DQ when it seemed like this was built as the ultimate finish, but from what happened at the end you could tell that there was something bigger being planned that would blow this out of the water. In addition, this was an era where most fans didn’t care about finishes being clean or not, they just cared about seeing their favorites look strong and they were crazy for Hogan during this early stretch. As mentioned, the crowd here at MSG was red hot for the whole match and everything that happened afterwards, and again they didn’t care about the schmozz ending as they just cared that Hogan was standing tall at the end. Hogan does end up winning the match by DQ and retains the title, but there was much more gas in this feud and little did anyone know that we were heading into what would end up becoming the flagship show for the WWF.