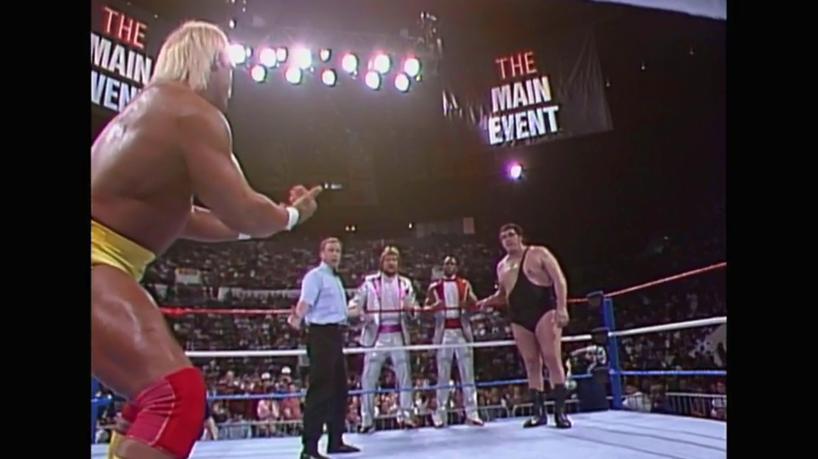 As we head into the month of February for 1988, there was a lot of excitement surrounding the WWF as they were coming off the successful Royal Rumble on USA and there was a lot of buzz heading into Wrestlemania IV. However, one thing that seems to have been a bit overlooked by most is that we had just past the 4 year anniversary of when Hulk Hogan’s WWF Title reign began back on January 23rd, 1984. In that span of four years, Hogan has consistently put on good to great matches and the crowds have been absolutely rabid for him to defeat any given opponent. But as we were heading on the road to Wrestlemania, there was one major obstacle in front of Hogan and that was Andre the Giant despite them having wrestled almost a year ago at Wrestlemania III. Even though Hogan would defeat Andre in the Pontiac Silverdome, there was still just enough doubt in that match to the point that you still saw Andre as a viable threat to end Hogan’s epic reign. Coupled in the fact that we had this burgeoning angle with Ted Dibiase hell bent on taking the title without actually having to defeat Hogan for it, and you had the recipe for a pretty hot match that belonged at WM though in a unique twist they decide to put on this special live TV show known as the Main Event.

The build for this match pretty much began back at Wrestlemania III when Hogan defeated Andre to retain the title, but Bobby Heenan on TV would claim that Andre pinned Hogan for a three count in the early stage of the match when Andre fell on top of Hogan during a slam attempt. Andre would take the summer off to have back surgery while Hogan would work various opponents on the house shows and Bobby would keep hounding Hogan for a rematch, and Andre would return in September and the demands for a rematch got more intense as it was announced the two men would captain teams for the inaugural Survivor Series. Andre’s team would defeat Hogan’s team with Andre being the sole survivor only for Hogan to clear him from the ring, and Andre would also be involved in Hogan’s title defense against King Kong Bundy at the November SNME. On 12/13, Dibiase would announce his intentions to buy the WWF Title and he was making Hogan a generous offer for the belt, and on 12/19 Hogan made like he was going to accept the offer only to turn it down decisively. Dibiase would take another route and he would purchase Andre’s contract from Heenan as Andre vowed to hand Dibiase the title after he won it, and on the 1/2/88 SNME Hogan would retain the title over Bundy only for Andre to attack him after the match. It was announced the two men would face off on this special show called the Main Event and they would have the contract signing at the Royal Rumble, and Andre would attack Hogan after the signing and he tipped the table on top of him. The build for this match has been very well done as Andre has looked like a monster and has had Hogan’s number since returning in September, and you again wondered why they would do this match here and not at WM which could only mean that something big was going to go  down though you didn’t know what.

We saw a special video of Hogan training for the match and then we would see a great video package highlighting this entire feud, and then we hear from both men has they both have great confidence going into this match. Andre was red hot as a heel as he and Dibiase were greeted by loud boos while Hogan as usual gets the big pop from the crowd, and you can feel the tension and the crowd was ready to explode when they finally collide. A key note to mention is the ref of the match is Dave Hebner which Jesse calls out as a good thing since Joey Marella was the ref for the WM III match and Jesse claims he caused the controversy. Hogan is completely fired up in the ring as Andre stands on the apron cool and calm along with Dibiase and Virgil, and Andre takes his time getting in the ring as the crowd chants “Hogan” and Hogan continues to get fired up. Andre converses with Dibiase only for Hogan to finally come over and nail Andre before ramming Dibiase and Virgil’s heads together, and he slings Virgil and Dibiase over the top into the ring before hitting a big boot on Virgil that sends him over the top to the floor. Hogan then hits a big boot on Dibiase who goes over the top to the floor and Hogan pounds on Andre while avoiding his shots, and he continues to pound on Andre and he rams him into the buckle twice before getting a kick in and nailing a double chop. He nails a high elbow on Andre and continues to pound on him before hitting a clothesline as Andre is still on his feet, and Dibiase gets on the apron only for Hogan to scare him down as Virgil gets on the apron and Hogan knocks him to the floor. He nails Andre again and stomps on Dibiase’s hand which causes money to fly out in a funny spot before continuing to pound on Andre in the corner, and he rakes the eyes and splashes him in the corner before hitting a big wound up punch and raking the eyes again. Hogan goes up top which is rare for him and Andre grabs him first before tossing him to the mat, but then Andre misses a falling headbutt and Hogan goes for a pin only for Andre to grab him in a choke and he releases before five. Andre continues to choke Hogan and he takes him to the mat while continuing to choke him, and he pounds on Hogan and whips him hard into the corner before stomping on his hand. Andre hits a big slam on Hogan and stomps on him before kicking at him and he hits a big headbutt, and he knocks Hogan to the mat and Hogan grabs at his leg only for Andre to drive his knee into Hogan’s face. Andre pounds on Hogan in the corner and hits another headbutt before choking him on the mat briefly and hitting yet another headbutt, and then he hits a big boot on Hogan which knocks him down as well and Hogan rolls outside to regroup. Virgil throws Hogan back into the ring and Andre chokes him behind the ref’s back before hooking a submission on while using the strap of his singlet to choke Hogan, and Andre nails Hogan in the back and chokes him again as Hogan fights to his feet and breaks the choke before getting a knee in. He pounds on Andre and rakes the eyes before going up to the middle rope and hitting a clothesline that knocks Andre down, and Hogan looks for the legdrop only for Virgil to grab his leg and the ref gets distracted as Hogan hits the legdrop and goes for the pin. Hogan argues with the ref as Andre grabs him from behind and hits a pair of headbutts before turning him around, and he hits a modified double underhook suplex which gets the three even though Hogan clearly had his shoulder up at one and we seemingly have a new champion.

After the match, Dibiase and Virgil get in the ring and celebrate with Andre as Hogan pleads to the ref that his shoulder was up, but the ref ignores him and officially declares Andre the winner and the new WWF Champion much to the shock and hatred of the crowd. “Mean” Gene Okerlund then comes up for an interview with Andre who says that there is no surprise that he would win, though he does slip up and call the title the World Tag Team Championship belt though it is Andre so you forgive him. Then in the ultimate shocker, he announces that he is surrendering the title to Ted Dibiase as he and Virgil put it around his waist and raise his hands in front of Hogan, and then they head to the back as Andre waves his hand at Hogan to motion that he’s done with him. But just then, another referee gets in the ring and he argues with the other ref as it is clear they look identical based on their facial features, and Hogan turns to notice this as he realizes that the ref for the match may not have been the real Dave Hebner. Hogan grabs both men and tries to get some answers before letting them go and then the assigned ref knocks the other ref down and kicks him in the ribs, and Hogan stalks him before grabbing him and pressing him up as he tosses him onto Dibiase and Virgil in the aisle though he overthrows him as Dibiase and Virgil miss catching him. We then hear from Hogan as he is in disbelief over what happened and accuses Dibiase of having someone get plastic surgery to look like Dave Hebner, and we see the conclusion of the match where Hogan claims the ref was paid off.

Needless to say, I thought the match that we got lived up to the hype going in though it was clear this was a much different match than the one we got at WM III. Obviously, the in-ring action of this match paled in comparison to WM as it was a year later and the back surgery had stunted Andre which would continue to plague him through the rest of his career. But much like WM, the heat and crowd pretty much carried this match and the Indianapolis crowd was pretty good though again they paled to 93,000 people in the Silverdome. Andre and Hogan pretty much did their thing in the ring while Dibiase and Virgil kept up the energy on the outside, and I thought Vince and Jesse were excellent for this match as Jesse was pretty much praying for Hogan to lose. Obviously, the main thing this match is remembered for is the ending and the twin referees which was pretty unique for the time as you never saw something like that, and it was jarring to see Hogan finally lose the title after having a stranglehold on that belt for four years. The fact that Andre not only beat Hogan but even did what he promised and gave the belt to Dibiase was crazy, because even though Dibiase has been promising this for months you never expected them to go through with it and I have to say Dibiase with the belt around his waist was an awesome visual. I had mentioned that it seemed weird that this match was happening here and not at WM, but now it was pretty clear that they were building towards something different for WM where you expected Hogan to regain the title. As mentioned, the crowd was hot for the match and are clearly not happy when Andre is announced champion and then they are stunned when Andre gave the belt to Dibiase. In the end, Andre is declared the winner and Dibiase is now seemingly the WWF Champion as he makes good on his vow to become champion, but it was clear there was more to come from this.