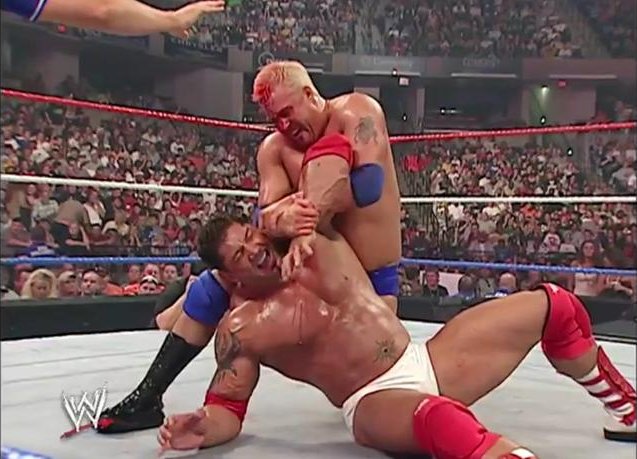 As most modern fans know by now, what happens inside the wrestling ring is predetermined and the wrestlers take great care to not seriously injure each other. They train for most of their lives to build their bodies up by continuously taking bumps and other types of punishment, and their bodies become more tolerant to the pain of being in a match. Having said that, the injury bug can bite someone at any time and it is always horrible when it does. Whether it something somewhat minor like a muscle tear or broken bone to something far more severe that results in permanent injury or retirement, it is never fun to see someone go down to injury. It is even more devastating for someone to go down to injury when they are right in the middle of a big push and something like an injury could be the worst thing to happen to someone.

Case in point: Batista was in the midst of a hot run when he dominated 2005 as the World Heavyweight Champion. He had a trio of great matches with Triple H, and after being moved over to SmackDown he was clearly being seen as the anchor guy on that show. However as the year went on, Batista started getting plagued by injury as he first suffered a back muscle tear which he tried to work through. But then he suffered a biceps tear in January which would force him to the sideline, and he would vacate the World Title. He would end up missing almost 7 months of action which is never a good thing, as when you finally come back there is ring rust and any momentum you had built has to be rebuilt. But sometimes, an injury could be used in the storyline to build towards a match which was set to happen as Batista would’ve faced Mark Henry at this show since Henry was the one that Batista faced when he got severely hurt. However, in a cruel twist of fate, Henry would suffer an injury himself and now the match would end up being reworked to include someone else that was also coming back from injury.

The build for this match originally began during the month of June when it was announced that Batista was set to make his return in July. Mark Henry vowed that he would take Batista out again when he returned and ran down the list of guys that he had injured over the last few weeks. On the 7/7 SmackDown, Batista finally made his return full-time and would get into a brawl with Henry which saw Batista lay Henry out with the steps and a chair as they were set to face off at the Bash. On the 7/15 Saturday Night’s Main Event, Batista defeated Henry in a 6-man tag though during the match Henry would suffer an injury to his knee which would put him out of action. 2 nights ago, Batista announced that he was issuing an open challenge to anyone who dared to face him, and his challenge was answered by Kennedy who wanted to take this chance to step up. It was a good way to salvage this match as it was too bad that Henry would again suffer a major injury to stall his push, but if anything it was a way to try and elevate a future star in Kennedy.

Batista comes out to a hero’s welcome as he gets a huge pop from the crowd who has been up and down on a very bizarre night, and Kennedy was pretty over as a heel as he comes to ring full of confidence knowing this is a big moment for him. Kennedy looks to do his awesome intro as the mike comes down, but Batista instead knocks him down to start the match and he pounds on Kennedy. He rams Kennedy into the buckle and pounds on him before choking him in the corner, but Kennedy rakes the eyes and he nails Batista from behind. Batista no-sells it and kicks at Kennedy before whipping him hard into the corner, and Kennedy rolls outside to regroup only for Batista to follow him and ram him into the barricade. He rams Kennedy into the apron and then into the steps which busts Kennedy open, and he throws Kennedy into the ring only for Kennedy to catch him coming in and pound on him. Batista gets a knee in and rams Kennedy into the buckle before pounding on him in the corner, and this has been pretty much a straight squash as Batista was taking months of frustration out on Kennedy who was taking the beating pretty well here early on. He chokes Kennedy with his boot on the mat before splashing him in the corner, and Kennedy again rolls outside to regroup and complains about what Batista has done to him as he is bleeding pretty good. He teases walking out only to rush back to the ring and try to ambush Batista, but Batista sees him coming and hits a spear. These first few minutes have been all Batista as he has beaten Kennedy from pillar to post, and it was pretty impressive to see Batista look so strong as Kennedy’s selling has been really good as well.

Batista goes outside and pounds on Kennedy only for Kennedy to catch him with a shoulder to the ribs twice, but he misses a charge and sails through the ropes to the outside as Batista has an answer for everything that Kennedy has done. Kennedy tears at Batista’s eyes and rolls into the ring as Batista tries to follow him in, but then Kennedy throws the ref into Batista which allows him to hit a pump kick on Batista. Kennedy stomps on Batista as he finally looks to take control and he chokes Batista on the mat, and he tears at Batista’s face before hitting a short clothesline. He pounds on Batista on the mat and then he continues to pound on Batista in the corner, and he stomps on Batista and hits a running boot as Kennedy’s face is just covered in blood. Kennedy rolls outside and rams Batista’s arm into the post before tearing at his face again, and he hits a kick to the back of Batista’s head as Batista falls to the floor. I’ve enjoyed the layout so far of this match as Batista dominated early and Kennedy had to survive the onslaught, and then he got his opening and is now in complete control. He pounds on Batista and rams him into the steps as the crowd chants for Batista, and Kennedy throws Batista into the ring and gets a two count. Kennedy hooks a submission on Batista and he starts to focus on the arm that was injured, and another point is how great Cole and JBL have been in putting Kennedy over for challenging Batista and taking the fight to him. Kennedy pounds on Batista and slaps him in the face only for Batista to grab him in a choke, and he tosses Kennedy into the corner only for Kennedy to catch him with a boot to the face. Kennedy charges at him only for Batista to catch him and ram him into the corner before ramming the shoulder repeatedly into him, and he rams Kennedy’s shoulder into the post three times. He stomps on Kennedy in the corner and chokes him with his boot as the ref tries to force him off, but Batista refuses and the ref calls for the bell as Batista has been disqualified and Kennedy wins in an upset. After the match, Batista hits a trio of spinebusters on Kennedy before hitting the Batista Bomb to a big pop, and he leaves Kennedy a bloody heap before heading to the back.

This is a weird match to grade because I thought that it was pretty decent in a vacuum, and both men worked hard though they didn’t have much time to work with as they only had 9 minutes. It was clear that Batista was still shaking off the ring rust since he’s only had one other match since returning while Kennedy was looking slightly better since returning, and given that this was thrown together at the last minute they did the best that they could. As mentioned, I liked the structure of the match as Batista dominated early, Kennedy got a bit of shine and then Batista destroyed him in the end. The ending of the match is really head scratching as the clearly didn’t want to job Batista out in his big return, but it was clear that they had big plans for Kennedy and didn’t want him to lose clean either. They were in a tough spot as you had to have Batista on this show while also giving Kennedy a rub, so they went with the weak DQ though they kept Batista strong by destroying Kennedy after the match. After being up and down throughout the night, the crowd was pretty hot which isn’t surprising since Batista was still very over though it was clear the ending pissed them off big time. But at the end of the day, Kennedy does get the win over Batista by DQ though Batista makes him pay for it, and both men move on as Batista has his eyes on the belt he never lost while Kennedy continues to prove himself.