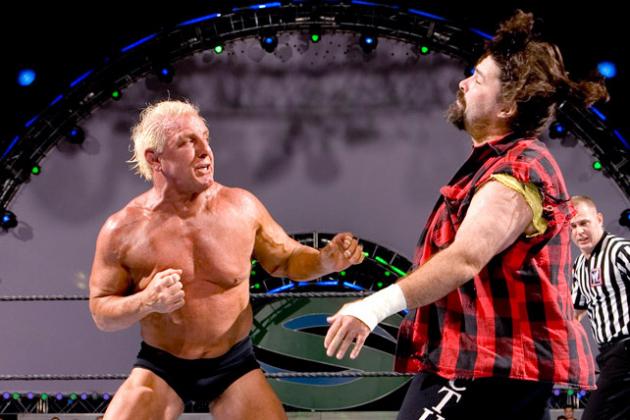 “Nature Boy” Ric Flair vs. Mick Foley in an “I Quit” match

So for the first time since I revived the Vintage Vault Previewing, we have a PPV rematch to talk about. Obviously, these two men faced off at Vengeance in a 2-out-of-3 falls match which Flair won in two straight, but Foley would get the last word when he bloodied Flair after the match. While many fans were disappointed at the outcome and length of the match, you knew that there was going to be a rematch down the line. This was the perfect way to build towards a marquee match for SummerSlam and even on a loaded card, these two would go all out to possibly steal the show.

As mentioned in the Vengeance preview, these feud mainly began because of real life tension between the two due to things that were said in each other’s autobiographies. Foley would rip on Flair for being a lousy booker while Flair called Foley a “glorified stuntman” and the feud would play out on TV. In addition, Foley was keeping a blog on WWE.com during this time and he would often mention Melina, who he considered his favorite Diva at the time. He would have her inserted into the feud which was interesting as it would put Melina in a pretty big story, but their relationship would come off pretty weirdly on TV.

The night after Vengeance, Flair cut a promo from his home where he said that Foley proved that everything Flair said about him was true and that their issues were not over yet. On 7/10, Flair was cutting another promo when Foley appeared on the Titantron and ran down Flair before saying that there would be no rematch. Paul Heyman would then come out and challenge Flair to face Big Show for the ECW Title the next night which Flair would accept. On 7/11, Flair would take Show to the limit only for Show to defeat Flair to retain the title and Flair would receive a standing ovation from the crowd. Earlier that night, Flair again challenged Foley to a rematch and offered to let Foley to choose the stipulation for their match. On 7/17, Foley delivered another pre-taped interview where he again said there would be no rematch, and Flair would come out and offer to face Foley in a hardcore match. He was interrupted by Johnny Nitro and Melina who claimed to be friends of Foley and would face Flair instead of Foley. The two men brawled which saw Melina hurt her ankle and Flair apologized for her getting hurt, but told them that he still wanted to face Foley. On 7/24, Foley said he would be on RAW the next week to get revenge for what happened to Melina and later that night, Flair would defeat Nitro in a tag match. On 7/31, Foley and Flair have a confrontation in the ring after Foley made light of Flair’s road rage incident earlier in the year, and it was announced that Vince had sanctioned an “I Quit” match between the two at SummerSlam though Foley argued that he would only face who he wanted to and wouldn’t face Flair. On 8/7, Flair read Foley’s second book and mentioned that Foley’s favorite match was the “I Quit” match between Flair and Terry Funk, and after some more goading Foley would finally agree to face Flair at SummerSlam. Six nights ago, Foley vowed that he would end Flair’s career and Flair would defeat Nitro by disqualification with Melina hitting a low blow on Flair and Foley would leave him laid out. Five nights earlier on ECW, Foley would have a dance with Melina and Kelly Kelly until Flair attacked him, choking him out with a belt and vowing to make Foley quit. The build to this match has been tremendous as Flair was dead set in getting his rematch with Foley and Foley tried to duck out of it, but finally gave in and you knew they would go all out here. One of the best quotes during this whole build that put everything into perspective was when Flair said, “May one of us bleed to death in Boston”.

Foley and Melina have a pep talk before the match as Foley seems concerned about Flair after what happened on ECW, and Melina is unsure as well only for Foley to say that he will take pleasure in making Flair say “I Quit” tonight in a good little promo. Foley gets a mixed reaction from the crowd as he comes out with a trash can while Flair gets a big pop from the crowd. Foley wastes no time and pounds on Flair in the corner to start the match, and then he hits the running knee on Flair before grabbing the can and ramming it into Flair’s face. Foley quickly pulls out Mr. Socko and hooks the Mandible Claw on, taking Flair to the mat and Foley demands that Flair quits or it will get worse though Flair refuses and Foley says that he will suffer. Foley wraps barbed wire around the sock and sets up for the Claw again, but Flair grabs Foley by the balls and he pounds on Foley before hitting a low blow. Flair pounds on Foley in the corner and takes the sock off before putting it on himself, and he chops Foley with the barbed wire in the corner before knocking him to the outside. Foley tosses the can into the ring which Flair avoids and he hits an axehandle off the apron, and then he whips Foley knees first into the steps which is always a nasty bump no matter how many times Foley does it. Foley gets a shot in and pulls out a barbed wire-covered board, and he rams the barbed wire into Flair’s face which busts him open and Flair is just gushing blood. Foley pounds on Flair and throws him into the ring before nailing him in the face again with the wire, and he rakes the wire across Flair’s face as the crowd chants “We want fire” as if this wasn’t enough. Foley chokes Flair on the ropes before grabbing the board and again ramming the wire into Flair’s face, and then Foley drives the wire into Flair’s body as he is just a bloody mess which is pretty hard to watch. Foley again wants Flair to quit and Flair tells him to kiss his ass as Foley nails him with the mike, and then Foley grabs a bag and dumps hundreds of thumbtacks onto the mat as the crowd pops big time. Foley pounds on Flair and then he hits a slam onto the tacks in another nasty spot, and Foley again wants Flair to quit only for Flair to refuse and Foley again says that he will suffer. Foley goes outside and pulls out the barbed wire baseball bat which he brings into the ring, and he rakes the wire into Flair’s face which is just absolutely gruesome until Flair hits a low blow. Flair rams Foley’s shoulder into the post and then he grabs the bat and he nails Foley in the arm repeatedly, and Foley’s arm is busted open as Flair pounds away with some stiff shots. Flair bites at Foley’s face and demands that he quit or he’ll kill him, but Foley refuses and Flair again grabs Foley by the balls before knocking him to the apron. Flair grabs the bat and rams it into Foley which knocks him to the floor with the back of Foley’s head hitting the can, and that was just a nasty spot and one really hard to watch considering Foley’s past issues.

EMTs come out as Foley appears to be knocked out cold and the ref calls for the bell which pisses off the crowd as Melina runs out as well, but Flair says that this is an “I Quit” match and he demands that the match continue. Flair throws Foley back into the ring with Foley rolling right over the tacks and the bat, and Flair rakes the wire across Foley’s face which busts him open and he stomps on Foley. Flair vows to rip Foley’s eyes out as he rakes the wire across Foley’s eyes, and Flair is looking just sadistic which was a side of Flair I don’t think anyone has ever seen before. Melina pleads for Foley to quit as Flair asks if he’s had enough before again driving the wire into Foley’s face, but then Melina grabs a towel from ringside and throws it into the ring to stop the match as she quits on his behalf. Flair again stomps on Foley as he says that Melina can’t quit for him and he must quit himself which the crowd pops for, and he pulls Melina aside before going outside and grabbing the bat. Melina covers Foley as Flair winds up the bat and charges at them, but then Foley says that he quits which ends the match and Flair is the winner. Flair heads to the back as Melina tends to Foley in the ring and Foley gets to his feet as the crowd is split with some cheering for Foley and some booing him.

The match itself was just a wild brawl as both men went all out and put on probably one of the sickest and gruesome matches in WWE history. With so much heat that the feud had generated thanks to their previous issues, this seemed like the best way to finally end this feud. One could possibly argue that 2006 was one of Foley’s best years as he had the awesome match with Edge at WM, the brutal six-person tag at One Night Stand and now this two-match series with Flair. This was also a good showing for Flair as he looks like a badass throughout this whole thing and he turned on the psychotic factor which again I don’t think many thought he had. While I enjoyed the match for what it was, it does feel somewhat gratuitous for these two to go all out in a match that was pretty buried on a loaded card like this. You could tell that they wanted to try and steal the show and to a point they did, but it also seems like the match should’ve been much longer with all the violence and it felt like they ended it right as it was getting hot. Having Melina involved in the mix was a bit weird too as I don’t blame Foley for wanting to help her get some shine, but their relationship just came off as completely bizarre and creepy. The crowd was really hot for the match especially coming off the Hogan/Orton match and they popped for Flair when he won. Flair gets the win as Foley says “I Quit” and both men move on as Flair would go off in a different direction while Foley would again take some time off after this incredible run.