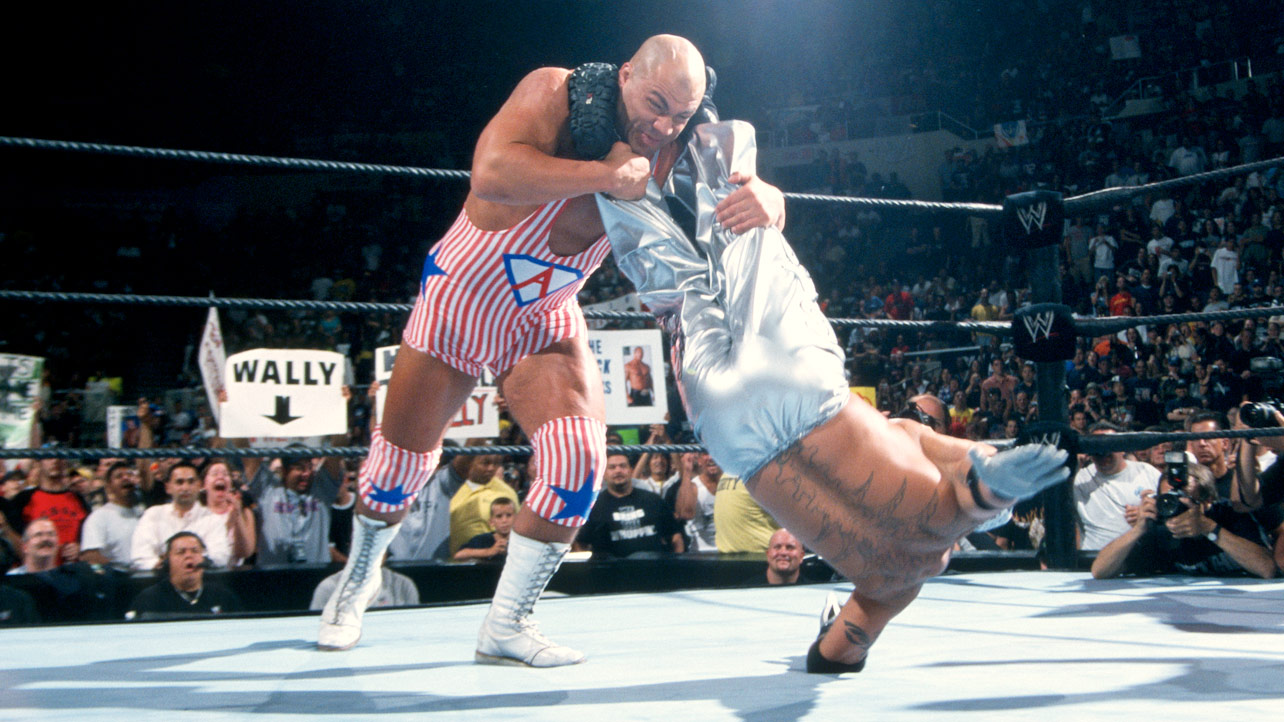 You can only make a first impression once. As the resident WCW expert around these parts, it may come as a surprise that I was never a huge fan of Rey Mysterio Jr. until much later in his career. I was of course bedazzled by his athletic ability but somehow was always more drawn to the likes of Ultimo Dragon and Dean Malenko in the cruiserweight ranks. Mysterio being a part of the Flithy Animals stable (going up against my beloved West Texas Rednecks) and wearing devil horns after his ill-advised mask loss didn’t help matters. Mysterio joining up with WWE a year after the Invasion was in full swing felt like a chance at redemption for me. Facing Kurt Angle in his first high profile match gave both individuals something to do around this point and served the dual purpose of Rey debuting against an established WWE star and Kurt was able to wrestle someone that could match him athletically.

The opening minute of this match is fantastic. I have been critical of Angle in his series of Edge of not exactly showing off his athletic regiment and instead relying on rest hold submission moves. He erases this in the first minute of this match by performing a roll through ankle lock attempt that was jaw dropping. This countered the early spurt of Mysterio. Mysterio quickly escapes that and goes for the 619. Angle shows off his vicious streak by dragging him to the outside by the leg.

Back inside, the vicious streak is continued. A vigorous suplex is followed up with a german suplex. Mysterio is able to time his comebacks better than almost anyone in wrestling history and here he fires them off perfectly getting some pin attempts or quick short bursts of offense before Angle takes over again. Angle focuses his attack on the back and remains focused. My favorite moment of this sequence his him catching Rey in midair and hitting a back breaker, then immediately going into a nasty half-crab submission that plays off both body parts of Rey that have been worked over in the match.

Immediately following that believable submission attempt is the weakest portion of the match where Angle decides to attack with the simple punch. These punches look fine and do convey a sense of frustration in the resilience of Rey. They also give Rey a good opening to make his comeback as he hits a jawbreaker. This flurry is short lived with Angle hitting a belly to belly and the strap is down. Rey has a counter of his own off the Angle Slam attempt and Angle goes tumbling to the outside. The crowd builds in anticipation for a dive. Jimmy Korderas becomes one of the big heels of the night stopping Rey from doing his dive due to Angle still being flat on the mat. Rey, in a super spot, decides to dive over Koderas to a huge pop. A super springboard legdrop gets Rey his nearest win so of the match. The cat and mouse continues with Kurt trying everything in his arsenal including locking on the ankle lock for a few precious seconds. Rey is able to escape and hits the 619. A springboard rana gets a 2.9 count that everyone in the crowd bit on. Rey ascends to the top and in a clever move; he counters the running up the ropes Angle throw that he knew was coming. Angle had one more trick up his sleeve as he slips out of the rana attempt and locks on the ankle lock. The ankle lock had been established throughout the match as the great equalizer that Rey must avoid. He is trapped here and has no choice but to tap.

What an amazing nine minutes of action. The cat and mouse interplay between these two was superb. Rey is the perfect foil for Angle for me because of his bumping ability, timing to Angle’s offense, and resourcefulness in having a logical reason to climb the top rope and play off of Angle’s signature moves. Everyone in this match comes off looking stronger than they did coming in and this was a preview of what was to come in the fall of 2002 in the WWE with the SmackDown 6 emerging.