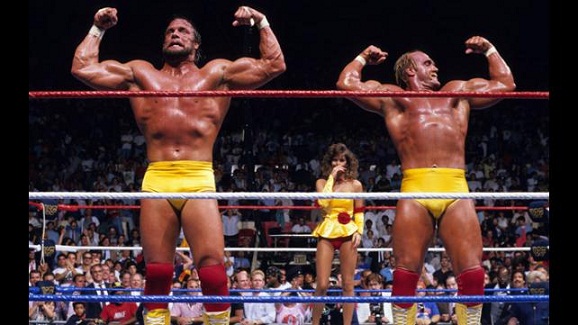 So as we head towards the end of the summer of 1988, it was pretty clear that there were a lot of big things going on within the WWF and there had to be a big show to bridge the gap between Wrestlemania and Survivor Series. Now while we did have Wrestlefest back in July, you knew that was not going to be that big of a show and instead we would end up getting what would be the last PPV to comprise what fans would know as the “Big 4”. It was pretty obvious that this new show dubbed Summerslam would be treated as the biggest show for the summer and the fact that it would take place in MSG made it feel like a special show. Making the show feel even more special is the main event of this show which is the Mega Powers of Hulk Hogan and Randy Savage taking on the team of Ted Dibiase and Andre the Giant who would go by the name the Mega Bucks. We have seen throughout the year how hot the feud between Savage and Dibiase was and now adding Andre and Hogan into the mix made it feel even bigger, and the fact that they had this match here and did the singles matches back at Wrestlefest showed that this was going to be a major show that you had to see. Adding to that is the fact that Jesse Ventura was named the guest referee made the match even more intriguing as you wondered how he would sway in the match.

Since Wrestlefest which saw Savage retain the WWF Title against Dibiase and Hogan defeat Andre in a steel cage match, the two teams would mainly stay apart on TV as they would cut promos on each other to build this match. Savage and Dibiase would continue to feud on the house shows coming out of Wrestlefest and they would continue to trade wins while Andre would resume his feud with Jim Duggan until August when Savage would fight Andre on the house shows. On the 8/21 Superstars, we saw Dibiase attempt to bribe Ventura by stuffing money into his pocket and the next week, Ventura claimed that he would take money if given to him and he would call it down the middle. As mentioned, there was a lot of intrigue going into this match given how hot the feuds have been throughout the year and ultimately the wild card could end up being Ventura.

The match itself was just a lot of fun as both teams worked hard for the 14 minutes they got and put on a really good tag match. This match reminded me a lot of the main event of the first Wrestlemania though I think this match was better than that one, and it was a fitting end to this feud that has dominated most of the year. I think they were very shrewd in putting this match on here and having the two singles matches back at Wrestlefest as you could easily see those two matches here, but by doing it this way it makes this match and more importantly this show feel very special. It was cool to finally see Hogan and Savage team up after being allies for almost a year while Dibiase and Andre looked great as a team, but I think that it begins here where you could tell that Andre was starting to lose a bit of his aura. Hence why they had Dibiase work most of the match and Andre only came in sporadically throughout the match, and I also though Ventura did a fine job as referee as he wasn’t overbearing in the match and played it straight until the end. However, I think everyone will agree that the moment of Elizabeth ripping her skirt off is still one of the greatest moments in WWF history because it was so unexpected and you never thought you would see Elizabeth do that. But needless to say, it was a great moment as it fulfilled every man’s fantasy to see her in her underwear while it also makes the Powers look smart by using her to counter Bobby and Virgil and help them get the win. As mentioned, the crowd was red hot for the whole match and the sustained pop from when Elizabeth ripped the skirt off to the three count was one of the best stretches from a crowd that I’ve heard before. The Powers get the win over the Bucks and finally put to bed what could argue is the feud of the year 1988, and both teams move on though it would be interesting to see if this feud continues on the house shows.