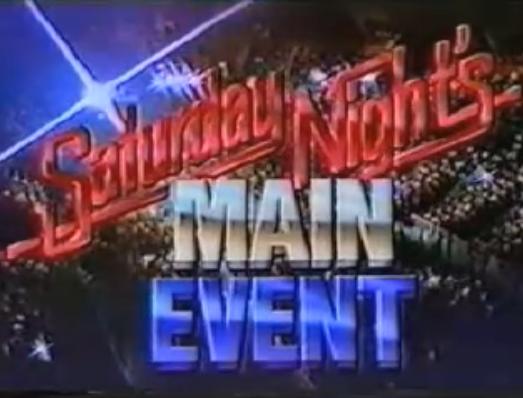 So we were now just over a month removed from WrestleMania and it was clear that things were only looking up for the WWF, so they decided to strike while the iron was hot in terms of their TV. Up to this point, the WWF’s main programming consisted mainly of squash matches to showcase the stars with them promoting the local house shows, and it was very rare at this point to see two big stars face off unless it was at a house or featured on the now 5-month old Prime Time Wrestling. So wanting to do something different, Vince collaborated with his old friend Dick Ebersol to present a special program that would air semi-regularly on Saturday nights in place of reruns of Saturday Night Live. The program would be called Saturday Night’s Main Event and it would feature matches pitting the top stars of the company against each other, and it would also be the first time in quite a number of years where wrestling would be shown on network television. It was a big risk for the company and it would pay dividends as SNME would be one of the highest rated programs on NBC whenever it aired and it would be the backbone special for the WWF over the next several years.

For the debut edition of Saturday Night’s Main Event which would air the night before Mother’s Day (and eventually bleed into Mother’s Day), one of the big matches featured on the show was a 6-man tag featuring the hot tag feud at the time. Following the upset win at WM, Iron Sheik and Nikolai Volkoff were continuing their feud with the US Express who wanted to get the titles back, and the previous month at MSG the teams faced off in singles matches with the Express winning both of them. Joining both teams for this match would be Ricky Steamboat who was continuing to climb the ladder and was clearly being groomed for the future, while on the other side was George Steele who was pulled out of nowhere to be in this match. It does seem somewhat bizarre that Steele was chosen here as he was pretty much an afterthought for most of the decade, and wasn’t doing much of anything before popping up here for this match.

Sheik, Volkoff, and Steele were pretty hot as heels here as Volkoff plays off the heat with his usual performing of the Russian National Anthem, and the Express and Steamboat get a big pop from the crowd. One thing to point out right off the bat is having Vince and Jesse as the commentators as it seemed like Gorilla would do commentary with Jesse, but I thought Vince and Jesse meshed well here and they would get better over time. Windham starts the match off with Sheik and they lock up with Windham hooking a headlock and Sheik backs him into the ropes, but Windham blocks a shot and nails Sheik before going back to the headlock. Sheik whips him off and Windham knocks him down before blocking a hiptoss and hitting one of his own, and Steamboat nails a chop on Sheik before Windham hits a big slam. Windham works the arm and tags Rotunda who goes up top and nails a shot to Sheik’s arm, and he continues to work the arm and tags Steamboat who goes up top and nails a shot to Sheik’s arm. He knocks Sheik down and goes back to the arm before tagging Rotunda as they hit a double back elbow on Sheik, and Rotunda hits a slam and drops an elbow on Sheik for a two count. Rotunda hooks a front facelock on Sheik before going back to the arm before tagging Steamboat who pounds on Sheik, and Steamboat goes back to the arm only for Sheik to whip him off and attempt an abdominal stretch only for Steamboat to escape with a hiptoss. Steamboat hits a pair of hiptosses on Steele and Volkoff as the Express come in and Windham rams Sheik into the buckle, and the heels roll outside to regroup as we go to commercial break. When we come back from the commercial, Sheik rolls back into the ring and Steamboat goes back to the arm before hitting a powerslam on Sheik. Steamboat goes up top and hits a missile dropkick on Sheik before going up top again and hitting a crossbody for a two count as Volkoff breaks the pin up, and Windham nails Volkoff before being forced to the apron as Volkoff tags in only for Steamboat to pound on him. He whips Volkoff into Rotunda’s boot and tags Windham as they hit a double dropkick on Volkoff for a two count, and Rotunda tags in as they hit a double back elbow on Volkoff and then Rotunda hits a pair of legdrops for a two count as Steele breaks the pin. Rotunda gets distracted which allows Volkoff to get a kick in and pounds on him only for Rotunda to escape a slam and he rolls Volkoff up for a two count, and then Rotunda hooks a backslide for a two count and then he attempts a sunset flip only to land in the ropes. Rotunda hooks a headlock and tags Windham who pounds on Volkoff before hooking the headlock back on, and Volkoff whips him off only for Windham to hit a sunset flip though they land in the ropes again. Steele tags in and they lock up before trading blows with Steele retreating to his corner only for Sheik and Volkoff to drop to the floor, and Steele gets distracted and Windham rolls him up which gets the three and the Express and Steamboat win the match. After the match, Steele eats a pair of turnbuckles out of frustration until Sheik and Volkoff attack him from behind, but Steele clears them from the ring as Albano consoles him.

The match itself was pretty solid as all 6 men worked hard and put on a decent 7 minute match though honestly it felt more like a 7-minute squash which was a bit bizarre in terms of the booking. In a way it made the US Express and Steamboat look very strong as they dominated the heels throughout the whole match, but again it felt weird to have the tag champions look weak and it also appeared to just be there to do Steele’s face turn which also seemed meaningless at this point. If this match took place at a house show or perhaps a PPV, this would’ve been about 15-16 minutes and more back and forth between the two teams, but because it is on a short show it got shortchanged and turned as mentioned into almost a squash. I guess they thought after Sheik and Volkoff won the titles from the Express at WM they wanted the Express to get some heat back which was fine, but again the match could’ve been a bit more back and forth for such a big show. But as mentioned, this was a big deal as you would usually see a match like this only on PPV so to see it on free TV like this was pretty big and made SNME feel special right off the bat. The crowd was hot for the whole match and popped for the Express and Steamboat when they got the win. The Express and Steamboat get a pretty decisive win over the tag champions and Steele, and both teams move on.