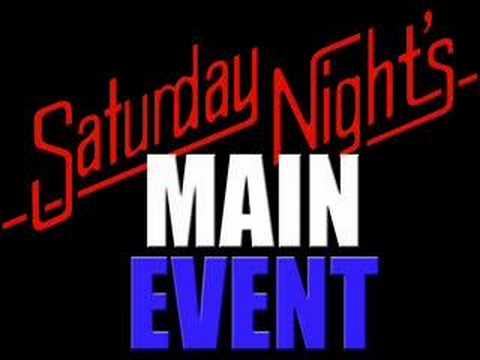 So as we head into the new year of 1988, it was clear that 1987 was a very successful year for the WWF as Wrestlemania III exceeded all expectations and we saw a new PPV created with Survivor Series. The company was also continuing to grow with a burgeoning midcard and the tag team division was rocking on all cylinders, but it was pretty clear that the one man who had one of the greatest years was the WWF Champion Hulk Hogan. As we turned the calendar to 1988 and Hogan was now coming on his fourth year as champion, there was a feeling amongst most fans that he was not going to lose the title anytime soon. However, the year 1987 did end for Hogan on a low note as he lost the Survivor match to Andre and suffered a countout loss to King Kong Bundy at our last SNME, and now he was looking to get back on track though by this point it was clear that we were setting up for another showdown between Hogan and Andre. There was also another factor to consider going in and that was Hogan recently turning down Ted Dibiase’s offer to sell him the WWF Title and you had to wonder how that would potentially factor into a potential Hogan/Andre rematch. With so much stuff going on as 1987 ended, it would be interesting to see how the first SNME of 1988 would pay off some of these issues with the first being the Hogan/Bundy feud.

Since their last encounter at SNME back in November where Bundy defeated Hogan by countout, Hogan would spend the early part of December working the house shows with the One Man Gang while Bundy would feud with Bam Bam Bigelow. On the 11/28 Superstars, Ted Dibiase made his intentions clear that he would buy the WWF Title from Hogan, and on 12/18 Hogan would turn Dibiase’s offer down definitively. Hogan would then work a house show against Dibiase before turning his attention back to Gang, and then as December ended Hogan would team with Bigelow against Andre and Bundy as it was announced that Bundy would face Hogan at the first SNME of 1988 for the title. It was pretty interesting that Bundy was ramped back up for this feud with Hogan after being pretty cool since Hogan beat him at WM 2, but given the history between them it did make sense and it was clear he was just a placeholder until Andre and Hogan would face off.

Hogan gives two good promos on Bundy before the match and Bundy and Bobby give a good promo with Bobby dropping a bomb by having Andre take his place at ringside, and a cool touch is Bobby in the neck brace selling what Hogan did to him at the last SNME. Bundy was still pretty hot as a heel though Andre was clearly a hotter heel than he was, and Hogan gets his usual big pop from the crowd. The two men lock up to start with Hogan shoving Bundy back into the corner and he avoids a charge from Bundy as he sends him into the corner, and Hogan pounds on Bundy and rams him into the buckles before hitting a big boot that sends Bundy through the ropes to the outside. Bundy regroups on the floor with Andre before returning to the ring and Hogan gets a kick in before nailing a trio of elbows on Bundy, and he hits a clothesline on Bundy who again rolls outside to regroup with Andre before returning to the ring. They lock up with Bundy backing Hogan into the ropes and Hogan blocks two shots before pounding on Bundy, and he knocks Bundy down and works on his arm only for Bundy to turn it around and he yanks Hogan to the mat by his hair. Hogan fights to his feet only for Bundy to again yank him to the mat by his hair and he continues to work the arm, and Hogan fights to his feet and pounds on Bundy before knocking him back twice only for Bundy to catch him with a back elbow. He wraps Hogan’s arm around the top rope and pounds on it before ramming him into the corner and pounding on him, and he continues to work on the arm as he yanks Hogan to the mat by his hair a third time and he drives his knee into Hogan’s face. Hogan fights to his feet and pounds on Bundy before hitting a slam only to miss the elbow, and Bundy kicks at Hogan and pounds on him before hitting a slam of his own though he misses a pair of elbows. Hogan pounds on Bundy and whips him into the corner before splashing him and he continues to pound on Bundy, but Bundy reverses a whip and sends Hogan back into the corner as he hits the Avalanche only for the ref to be caught in the middle and he collapses to the mat as does Hogan. Bundy misses the big splash and Hogan pounds on him before nailing an elbow and he knocks Bundy through the ropes to the outside, and a second ref comes out to take over and Bundy regroups with Andre on the floor as EMTs come out with a stretcher and they take the first ref to the back as we head to a commercial break.

We come back from the commercial break as Bundy continues to converse with Andre on the floor before returning to the ring, and they lock up with Bundy raking the eyes twice and he pounds on Hogan in the corner before hitting a clothesline. Bundy drops a knee on Hogan for a two count and he knocks Hogan over the top to the floor, and Hogan gets on the apron as Bundy pounds on him and sends him back to the floor. Hogan climbs back onto the apron and Bundy knocks him down before stepping on his chest and throat, and he knocks Hogan down and drops a fist on him for a two count before hooking a submission on. Bundy pounds on Hogan and whips him into the corner before hitting the Avalanche, and then he whips Hogan into the corner again and hits a second Avalanche and a big splash for a two count as Hogan starts to hulk up. He no-sells Bundy’s shots and reverses a whip into the corner as Bundy falls to the mat and Hogan hits the legdrop which gets the three and he retains the title, and after the match Andre gets on the apron and Hogan challenges him to get in the ring. Andre refuses and steps to the floor as Bundy heads to the back and Hogan poses for the fans, but then Andre comes in the ring from behind and grabs Hogan as he hits a headbutt to the back of Hogan’s head and he starts choking Hogan. Hogan tries to fight out of it only to fall to his knees as Andre continues to choke him, and then the British Bulldogs come out and pound on Andre as they try to pull him off only for Andre to ram their heads together and he throws them over the top to the floor. Andre picks Hogan up by the tights and goes back to choking him as Jake Roberts, the Junkyard Dog, and Strike Force come out and try to pull Andre off, and Jim Duggan comes into the ring as Andre again chokes Hogan and Duggan nails him in the back with the 2×4 twice. Andre no-sells it and stalks Duggan as the remaining wrestlers pull Hogan out of the ring and Duggan retreats outside as well, and they help Hogan to the back as Andre holds the belt up high in the ring. At the end of the show, Bobby and Andre give a great promo as Andre says he took pleasure in choking Hogan and Bobby hints at something very lucrative that will benefit both of them.

The match itself was good as both men worked hard for the 12 minutes they got and they put on a solid match. Hogan was pretty much in his groove by this point as he closes in on four years as champion and Bundy still looked pretty good, but it was clear that he was not going to win the title at this point as he was on his last legs in the company. The only thing I didn’t care for was the long ref bump and I feel the match hit the skids a bit, but they pretty much kept a good pace with Hogan getting a clean win. This was also when Vince and Jesse were really hitting their stride as a team with Jesse calling Hogan out and Vince trying to defend him, and the best rant was when Bundy had his foot touching Hogan’s before the splash and Jesse called it a pin attempt though it wasn’t even close. Obviously as I mentioned, this was pretty much a way to end this feud quick and focus on Hogan/Andre as Andre’s attack on Hogan after the  match was great and Andre looked vicious, and seeing the wrestlers try to pull him off made him even more dangerous and that he couldn’t be controlled. It made you really excited about a potential Hogan/Andre rematch and you wondered if they would be headlining Wrestlemania IV in March which theoretically made sense to pay off the long build. The crowd was pretty hot for the match and popped big for Hogan when he won, but they are not happy after Andre attacks him and stands tall with the title. Hogan finishes off the feud with Bundy and retains the title, but his issues with Andre are far from over yet.