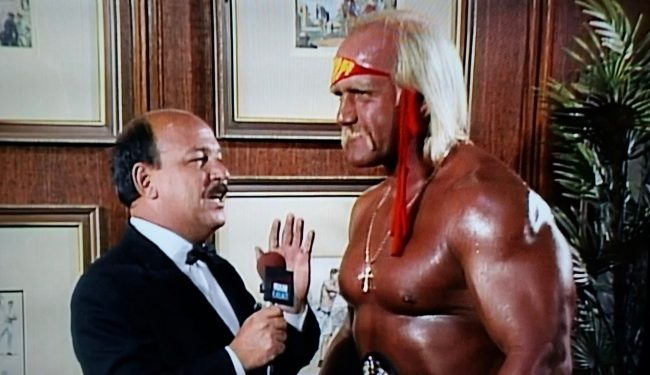 The Hart Foundation (w/ “Mouth of the South” Jimmy Hart and “Dangerous” Danny Davis) vs. the British Bulldogs (w/ Tito Santana) in a 2-out-of-3 falls match for the WWF Tag Team Championships

So as we are now a little over a month removed from arguably one of the greatest shows in the history of wrestling, it was going to be interesting to see where some of the feuds that were building towards that show would go whether they would end or continue on. One of the those feuds that seemed like it would go on is the feud between the Hart Foundation and the British Bulldogs for the tag titles as both teams faced off in the 6-man tag with Davis and Santana as their partners. It was pretty clear that the match was more about seeing Davis get his comeuppance at the hands of the Bulldogs and Santana though they would steal the win in the end, and eventually it would come down to a match between the two teams for the belts. This was one of those feuds that many could say was a bit hurt by the fact that there was only one PPV a year in that this feud deserved a big spot to blow off, but having Saturday Night’s Main Event around would be a good way to see the feud end though it would also suffer by not being able to have a long match like they would have on the house shows.

Following Wrestlemania, the feud between the two teams continued as Smith and Bret would have a series of singles matches in Calgary with Stampede Wrestling throughout the early part of April and they would trade wins, and they would work the house shows as it was announced that they would face off here in a 2-out-of-3 falls match for the titles. It was interesting as the time between Wrestlemania and this show was barely a month, but thankfully this feud was still hot that the crowd was amped for this title match and were dying to see the Bulldogs regain the belts.

The Harts and Davis give a pretty good promo before the match as they call the Bulldogs crybabies about how they lost the titles, and Davis tries to attack Okerlund after Davis got called out for his actions. The Harts were pretty hot as heels as they come down to the ring with a lot of confidence and the Bulldogs and Santana get a big pop from the crowd, and Matilda chases after Jimmy who quickly retreats out of the ring as Matilda gnaws on the megaphone. Smith starts off the match with Bret and they lock up with Smith shoving Bret back and they tease a test of strength until Bret works on the arm, but Smith flips through and works on Bret’s arm before hoisting him up in the air by the arm and slamming him to the mat. Smith drives the knee into Bret’s arm twice and continues to work it until Bret nips up and hooks a headlock, and Smith whips him off and hits a monkey flip before going back to the arm until Bret whips him off. Smith hooks a crucifix for a two count and he knocks Bret down only for Bret to catch him with a knee to the ribs, and Neidhart tags in and he yanks Smith up by the hair before slamming him to the mat. He pounds on Smith and rams him into the corner where Bret chokes him from the apron, and Neidhart pounds on Smith in the corner and tags Bret who continues to pound on Smith. Bret hits a backbreaker on Smith for a two count and then he hits a legdrop before ramming Smith into the buckle, and he whips Smith into the other corner only for Smith to catch him with a pair of knees to the face. Dynamite gets the hot tag and he whips Bret chest first into the corner before yanking him up by the hair and slamming him to the mat, and he hits a clothesline for a two count and then he hits a snap suplex on Bret for a two count. Dynamite hits a falling headbutt on Bret as Neidhart comes in and nails him from behind as Smith comes in, but Neidhart catches him with a knee and throws him to the outside as Davis stomps on him as the Harts stomp on Dynamite and choke him. Santana chases Davis around the ring as the ref calls for the bell and it is announced that the Harts were disqualified, meaning the Bulldogs win the first fall of the match. I thought the first fall was pretty solid with a lot of action between the teams leading up to the decision, but it will be interesting to see how the DQ plays into the upcoming falls especially if the Bulldogs win two straight.

As we come back from the commercial break, the second fall of the match begins as Bret grabs Dynamite and rams him into Neidhart’s boot before tagging him in, and Neidhart pounds on Dynamite and chokes him on the ropes before forcing him back to the corner. Bret tags in and the Harts hit a double team on Dynamite for a two count as Dynamite tries to battle back and hits a headbutt, but Bret grabs his leg and tags Neidhart who hooks a front facelock on Dynamite who has a busted nose. Dynamite reaches for the tag only for Bret to come in and kick at Smith who chases Bret around the ring as Neidhart chokes Dynamite on the mat, and Neidhart bites Dynamite on the nose as Bret gets a shot in from the apron and tags in. He continues to pound on Dynamite and ties him in the ropes only for Dynamite to free himself as Bret misses the dive and gets tangled up in the ropes, and Smith gets the hot tag and hits a dropkick on Neidhart before hitting a back elbow and a second dropkick. Smith hits a clothesline on Neidhart for a two count and then he hits the delayed suplex for a two count, but Neidhart catches him ducking with a kick and pounds on him as Bret holds him from the apron only for Smith to move and Neidhart nails Bret by mistake. Smith hits a clothesline on Neidhart as Davis gets on the apron only for Santana to come in the ring and knock him to the floor, and Santana gets out of the ring as Dynamite tags in and Smith presses him up before tossing him onto Neidhart which gets the three and the Bulldogs win the match in two straight falls. The crowd and Vince go crazy as they think the Bulldogs have won the titles, but Jesse laughs and reminds everyone that because the first fall ended in a DQ, the Harts retain the titles as they quickly rush to the back and the Bulldogs and Santana are left stewing in the ring.

The match itself was pretty good as both teams worked hard for the 10 minutes that they got and put on a solid title match for TV. The Foundation were really hitting their groove as a team by this point and you could tell their confidence has been building since winning the titles, and the Bulldogs were still in a good groove though it was pretty clear that Dynamite was still hurting with his back. Obviously, the chemistry between these two teams was still great as they could put on a match with their eyes closed and make it good, but it also felt like they were a bit shortchanged for only having 10 minutes to work with as they could’ve went another 10 and really put on a classic match. I thought it was cool to have the 2-out-of-3 falls stipulation added and it was even more interesting to have the Bulldogs win in two straight, but they obviously didn’t want the Harts to lose the titles yet so they have to do a cop out with the first fall being a DQ. I thought Vince was a little bit over the top here calling out the Harts and Davis for how they won the titles and Jesse shuts him down for it, and Jesse at the end is awesome when he mentions the DQ in the first fall and that the Bulldogs came so close to winning the titles only to have them snatched away. The crowd was red hot for the match and popped big time for the Bulldogs when they won, but then they are not happy when they learn the Harts are still the champions. The Bulldogs win the match in two straight falls though the Harts manage to escape with the titles, but this issue is not over yet.