Before each Vintage Vault edition of the Place to Be Podcast, Steve Riddle will select one match from the show and give an analytical breakdown of the action. 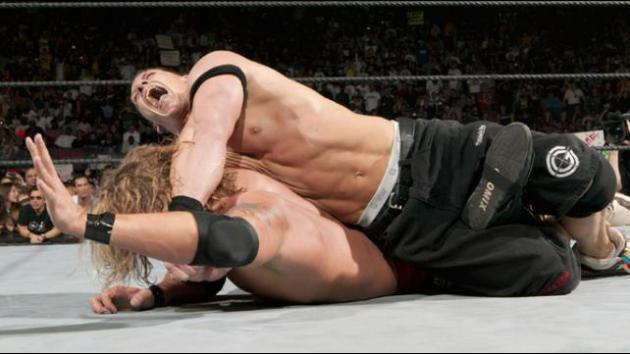 “The Rated-R Superstar” Edge (w/ Lita) vs. John Cena for the WWE Championship

As 2005 was coming to an end and 2006 was beginning, there was an air of uncertainty surrounding RAW and more specifically, John Cena. After winning the title at WrestleMania 21 and being moved over to RAW, he was clearly being positioned to be the face of the company. However since the move to RAW, it was clear that the fans were starting to split when it came to Cena. Part of that was due to the guys he was facing as they were guys that the fans liked and wanted to see become champion. As the year turned and we were about to begin the build to Mania, it seemed likely that Cena would keep the title and was set for an interesting feud.

But then, something unexpected happened when Edge cashed in Money in the Bank at New Year’s Revolution and became the WWE Champion. Suddenly, everything felt different as the ratings for RAW went up and interest peaked, especially after the infamous live sex celebration that Edge and Lita had the night after the PPV. This trend would continue as Edge would have a memorable and oft-forgotten TLC match with Ric Flair for the title. After several years of building himself up and many wondering if he could finally break through, Edge had proven his worth and had a new swagger which was furthered when he gave himself the nickname “The Rated-R Superstar”.

With this rematch set for the Rumble, it would be interesting where things were going to go in terms of the title. It seemed likely that Cena would regain the title here and head to Mania, but I’m sure that the company was unprepared for the reaction that Edge got when he won the title. It was one of those cases if they were going to stay status quo or shake things up, but I think many believed that the company would have Cena regain the title. There seemed to be very little doubt though considering the promo before the match that Edge had with Rumble winner Rey Mysterio, there almost seemed like a slight chance that Edge could retain and Rey could jump to RAW and the two might face off at Mania.

However when Cena made this elaborate and bizarre entrance with the scaffold and pyro, it was pretty obvious that he was going to win the title back. Now before we get to the ending, the match itself was actually very good and I think that gets forgotten due to everyone’s frustration with the ending. One thing I think about Cena since he debuted was that he has had many solid feuds, but has not had a solid rival. They tried to make Kurt Angle that early on, but I don’t think it clicked as well as  many had hoped though they finally got it here with Edge. These two showed that they had some great chemistry together and that would continue on not only through the rest of the year, but in the future. The match structure was also very interesting in that Edge dominated the majority of the 14 minutes until the end when Cena made his comeback and won the match. I liked early on how Edge tried to win by countout over Cena before taking control in a variety of ways.

Now as mentioned, the match itself was very good and Cena does get more cheers here than he’s gotten in the last few months, but the ending was so frustrating to most of the fans. Even though it made more sense for Cena to regain the belt and head to Mania as champion, there were many that wanted Edge to keep it and have a run with it. Instead he not only gets beat clean by Cena, he’s forced to tap out clean to Cena which as mentioned did get a big pop from the crowd, but I’m sure most at home were tearing their hair out. I think that most people were scared that Edge was going to get de-pushed and that it would kill his heat, but thankfully he would be transitioned into something else that would keep him pretty hot. Bur for the time being, it seemed that Edge was now heading back to the midcard while Cena would now move forward with his upcoming feud for Mania, but as mentioned the match itself was very good and the chemistry between these two would only get better.