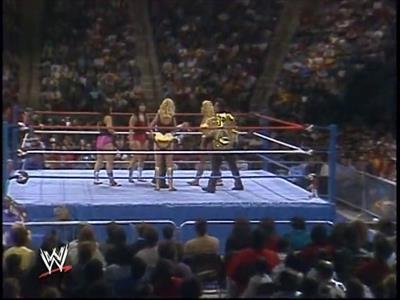 The Glamour Girls (w/ “Mouth of the South” Jimmy Hart) vs. the Jumping Bomb Angels in a 2-out-of-3 falls match for the WWF Women’s Tag Team Championships

So as we were coming out of 1987 and into 1988, the WWF was riding pretty high due to the success of the first Survivor Series and all signs were pointing to them having a great Wrestlemania. However, things weren’t completely rosy as the PPV companies were not thrilled with them putting Survivor Series on directly against the NWA’s show Starrcade and threatening the companies to show Survivor Series or they wouldn’t show Wrestlemania. As a result of this, Vince agreed not to do it again and when the NWA put on a new PPV with Bunkhouse Stampede, Vince stuck to his word though he would get around it by putting the Royal Rumble on free TV. It was an interesting concept with the brand new match that was the Royal Rumble and the real hook of the night was the contract signing between Hulk Hogan and Andre the Giant for the big Main Event special that would take place in February. However, one of the big attractions for this night was not just the Rumble or the contract signing, but rather the big showdown between the Glamour Girls and Jumping Bomb Angels. Even though they weren’t showcased on TV that much between Survivor Series and here, there was still plenty of heat on this feud and it would be interesting to see if they could live up to that hype with this match especially with it being 2-out-of-3 falls which was unheard of for women’s wrestling.

Since this was on TV on the USA network, we come out of commercial with the Girls in the ring as they were still pretty hot as heels and the Angels get a good pop from the crowd as they come out. The Angels waste no time and catch the Girls with stereo dropkicks to start the match only for Kai to avoid a second dropkick from Tateno, and she slings Tateno to the mat by her hair twice before whipping her into a boot from Martin. Martin tags in and gets a knee in before hitting a slam only for Tateno to bridge out of a pin attempt, and she hooks a rollup for a two count and tags Yamazaki who kicks at Martin and hits a rolling headbutt. She hoists Martin up for a piledriver before hitting a modified suplex for a one count and she tags Tateno, and she hooks a front facelock only for Martin to trip her up though Tateno catches her in a bodyscissors. Martin gets a shot in to escape and she catches Tateno on a crossbody attempt before slamming her to the mat, but she misses the elbow and tags Kai as Tateno grabs her and hits a high knee. Yamazaki tags in and hits a flying forearm on Kai before hitting a dropkick and she holds her for a shot from Tateno, and they trade shots on Kai for a two count as Yamazaki hooks a modified abdominal stretch on and Martin comes in to break it up only to kick at Kai by mistake. Tateno comes in and hits a dropkick on Martin as the Angels hook stereo Figure-4s on the Girls, and Tateno and Martin roll out of the ring as Yamazaki grinds down on Kai before releasing the hold and she slams down on Kai’s legs to stretch them out. She drags Kai back to her corner and slams down on the legs again before tagging Tateno, and she snaps Kai’s leg back before hooking another submission on as she slams down on the legs. She transitions into another submission and tags Yamazaki who goes back to the legs as Kai crawls to her corner, and Martin comes in as does Tateno and they pull on Kai from both ends until the Angels pull Martin to the mat. Yamazaki continues to work on the legs as Kai again crawls to the corner and Martin makes a tag only for the ref to prevent it since she was standing on the bottom rope, but then Martin does legally tags in and they square off as Martin works on the arm and she kicks at Yamazaki. She whips Yamazaki into the corner and blocks running into a pair of boots before tossing Yamazaki to the mat, and she stomps on Yamazaki and gets a shot in on Tateno as Yamazaki leaps over Martin only for Kai to knee her in the back from the apron. Martin sets Yamazaki up for a powerbomb only to throw her face first into the mat which gets the three and the Girls win the first fall as we go to a commercial break.

Back from commercial and the second fall begins as Martin kicks at Yamazaki and tosses her to the mat by her hair, and she stomps on Yamazaki and chokes her on the mat with her knee as Kai tags in and she stomps on Yamazaki. She hits a flying forearm and a big boot on Yamazaki only for Yamazaki to bridge up to prevent the pin, but Kai pounds on her and hits a slam only to miss the big splash and Tateno gets the hot tag. She hits a dropkick and a flying clothesline on Kai before going up to the middle rope and hitting a clothesline for a two count, and she hits a high crossbody on Kai for a two count before tagging Yamazaki as they hit a double suplex on Kai. Martin tries to come in only for Tateno to nail her though the Girls reverse whips and send the Angels into each other, but they avoid the Girls who collide with each other and Yamazaki whips Kai into the ropes only for Kai to knock her down. Kai hoists Yamazaki up for a powerbomb only for Yamazaki to roll through into a sunset flip which gets the three, and the Angels win the second fall as we head back into a quick commercial.

We are back from commercial break and will start the third and deciding fall of the match as Yamazaki gets a kick in and the Angels hit a double high knee on Kai, and they hit a double hooking clothesline on Kai for a two count as Yamazaki hits another high knee on Kai. Kai comes back with a pair of kicks and tags Martin who pounds on Yamazaki and catches a kick attempt, but Yamazaki hits an enzurgiri and rams Martin into the buckle before tagging Tateno. She stomps on Martin and attempts a fisherman’s suplex only for Martin to get a shot in and she rams the knee into Tateno, and she pounds on Tateno and whips her into the corner only to Tateno to leap over her and hook a backslide though Martin escapes. She trips Tateno up and hits a slingshot that sends Tateno to the mat as Kai tags in, and Martin hits a snapmare on Tateno as Kai grabs her hair and hits a neck snap on Tateno. She stomps on Tateno who rolls out to the apron and Kai hotshots her on the top rope twice, and she pulls her back into the ring and hits a double underhook suplex for a two count. She bites at Tateno’s hand and chokes her with her boot before tagging Martin who kicks Tateno to the mat, and Yamazaki tags in only for Martin to grab her by the hair and toss her to the mat. Martin pounds on Yamazaki in her corner as Kai chokes her from the apron and then she tags in, and they ram Yamazaki into the corner before Kai snaps her to the mat by her hair for a pair of one counts. Yamazaki blocks a shot and fires up on Kai before ducking two shots and she slams her to the mat in a seated position twice for a two count, and she rams Kai into the buckle before snapping Martin over the top into the ring and Tateno tags in. She goes up top as Yamazaki hits a slam on Martin and Tateno drives the knee into Martin for a two count, and then she hits a slam for a two count and she hits a double underhook suplex into a bridge for a two count. Yamazaki tags in and she hits a twisting high crossbody on Martin for a two count, and she hits a slam on Martin and goes up to the middle rope only to miss the senton and Martin gets a two count. Yamazaki trips Martin up and tags Tateno who goes up to the middle rope while Yamazaki holds Martin and Tateno hits a clothesline for a two count as Kai breaks the pin up, and the Angels go up top and hit stereo missile dropkicks on Martin as Tateno gets the three and we have new champions even though Martin’s shoulder was clearly off the mat.

The match itself was pretty good as both teams worked hard and put on a solid tag match for the 14 minutes that they got, and I thought doing the 2-out-of-3 falls stipulation was unique in that it would lead to a clear winner. You could tell these two teams really worked hard over the last half of 1987 and into this month getting their chemistry down and it shows here as they deliver a really good match that was pretty unique for the women’s division. The Glamour Girls have really gelled well as a team despite being forced to look like haggard women which sucks since they were still relatively young, and the Angels had they chemistry down to a point as well and together with the Girls they were putting on really good matches. I thought Vince and Jesse were solid throughout the match even with Vince first calling the Angels by “Red” and “Pink” before using their first names, but at least he was trying as Jesse was calling him out. It was smart having the Girls win the first fall and the Angels win back-to-back falls to take the match, but the ending was a bit botched with Martin’s shoulder being picked up in clear view of the camera though you could say it gave them an out for a rematch. Sadly, this would be the peak of this feud and the Women’s tag titles as it seemed like there was enough juice to get to Wrestlemania, but certain circumstances would prevent this and ended up killing off what’s been a good and underrated feud. The crowd was pretty hot for the match and they popped big time for the Angels when they won which makes it even worse that the feud was stopped cold after this. The Angels finally fulfill their goal and defeat the Girls to become the new tag champions, but again sadly this would be the final high note for both the Glamour Girls and the Jumping Bomb Angels.