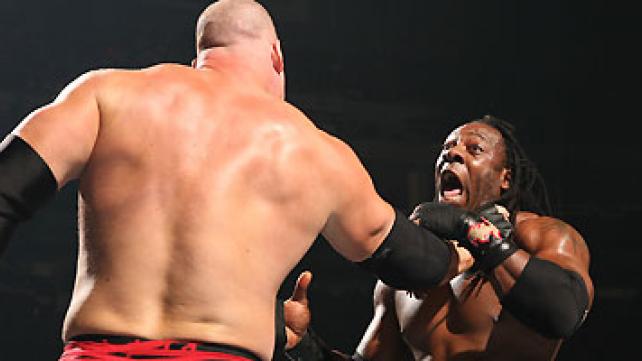 Since 2003, one of the biggest issues that has been debated by wrestling fans has been the notion of brand-specific PPVs in between the Big 4. On the one hand, it provided a way for guys who usually wouldn’t be on PPV to get some chance to shine, but on the other hand they sometimes did feel like glorified TV shows that you essentially had to pay for. Over the last three and a half years, we have seen our share of pretty good brand-specific shows though we’ve had more than our share of poor shows. This issue was clearly becoming a bigger issue now with the addition of a third brand with ECW and the rosters not being deep enough to carry a 3-hour show by themselves. So it would not surprise anyone that we were coming to the end of this portion of the brand extension as this would end up being the last brand-specific show and everything would be co-op shows going forward. While this could help the shows going forward as they will appear deeper, this might end up posing a problem for certain guys who usually only appeared on the brand-specific shows. Two of those Superstars on Smackdown that this might affect would be Kane and King Booker, two guys who were clearly not in the main event picture at the time. While Kane was a guy that could move up and down at will, it seemed that Booker was in a pretty big decline as the year started and all the momentum he had in 2006 may be lost.

The issue between Kane and Booker began back at the Royal Rumble when Kane eliminated Booker in the Rumble match, but Booker would return the favor by eliminating Kane and attacking him afterwards. On the 2/2 SmackDown, Booker returned to his hometown of Houston and was presented a key to the city before ripping on other Houston natives until Kane came out and attacked the city officials before knocking Booker out of the ring. The next week, it was announced that the two men would face off here at the PPV and 2 nights ago, Booker and Sharmell mocked Kane’s performance in “See No Evil” until Kane scared them off. This was about as basic a build as you could get as this was a match we haven’t seen much of and it was pretty fresh to see.

Kane does still get a pretty good pop from the crowd while Booker was still pretty hot as a heel and he was really hitting his peak as the King, but it does feel that most of his heat was pretty much gone. The two men square off to start with Booker trying to avoid Kane until Kane backs him into the corner and pounds on him, and he continues to pound on Booker before stomping on him. Booker gets a kick in and pounds on Kane only for Kane to choke Booker and toss him into the corner, and he pounds on Booker before draping him over the apron and driving the elbow into his throat. He rolls back into the ring and hits a back elbow on Booker before hooking a submission on, and he drives the elbow into Booker’s head before hitting a boot to the face. Booker rakes the eyes and gets a shot in only for Kane to reverse a whip into the corner, but Booker catches him with a back elbow only for Kane to hit a backbreaker. One thing to point out here is the continuing degeneration of Michael Cole’s voice during commentary as he was still holding on, but he was clearly getting worse and JBL was getting more lines in to fill the gaps. Kane stomps on Booker and drives a knee into his back as Booker rolls out to the apron, but Booker hotshots Kane on the top rope and rolls back in only for Kane to grab him by the throat. Booker gets a knee in only for Kane to reverse a whip and he hits a boot to the face, and then he clotheslines Booker over the top to the floor before going outside himself and he pounds on Booker. Booker gets a kick and rams Kane into the steps twice before throwing him back into the ring, and then he goes up top and hits a missile dropkick on Kane for a two count. This has been a pretty decent match so far and the commentary was good at playing up how Booker had to survive the initial onslaught and find his opening, and he has done that despite taking a beating from Kane.

Booker stomps on Kane repeatedly before working on the arm on the mat, but Kane fights to his feet and escapes the hold with an armdrag and then he hits a clothesline on Booker. He pounds on Booker and hits another big boot before going up top, but Booker catches him coming in with a kick to the face and then he hits a side kick on Kane for a two count. Booker pounds on Kane only for Kane to battle back and Booker ducks a shot before hitting a flying forearm for a two count, and Booker pounds on Kane on the mat before pounding on him in the corner. Kane blocks a suplex attempt and hits one of his own on Booker only for Booker to recover first and hit a superkick on Kane for a two count, and the two men trade blows with Kane taking control and he attempts a chokeslam only for Booker to escape with a kick. Kane avoids the axe kick from Booker and hits a clothesline that turns Booker inside out, and Kane sits up and fires up on Booker before ramming him into the buckle and pounding on him in the corner. Kane whips Booker into the other corner and splashes him twice before hitting a sidewalk slam, and then Kane goes up top and hits the flying clothesline on Booker. Kane sets up for the chokeslam as Sharmell gets on the apron only for Kane to scare her back to the floor, and Booker hits a side kick on Kane and sets up for the axe kick only for Kane to grab him and hit the chokeslam which gets the three and Kane wins the match.

The match itself was decent for what it was as both guys worked hard and put on a solid, if somewhat unspectacular midcard match. This was just an example of two veterans going out and putting on a basic outing as it was nothing standout, but nothing that sucked either. This was also another example of two guys who were not going anywhere at this point, so they were put together so they could get on the show. The only thing that is pretty sad is that Booker was so hot throughout the year of 2006 as the King and the World Champion, but since losing the title he has been on a constant downward spiral and was losing his heat quickly. While he was still a prominent face on SmackDown, it did seem that this was a big step backward for Booker to be put in this feud with Kane who hasn’t done much since the MVP feud. What makes it even worse is that Booker jobs clean here to Kane which was not the right decision as Booker should’ve won clean so that he could regain some of the momentum he has lost and instead he falls into an even bigger slump. I have to give JBL credit for trying to carry the match by supporting Booker and calling out Kane for his actions while Cole was clearly struggling to keep up with his voice getting worse. The crowd was somewhat in and out of it for the match though they did pop in certain spots and they did pop for Kane when he won. Kane gets a big, clean win over Booker for some really bizarre reason and both men move on as Kane moves on to a new feud while Booker is grasping for anything to get back on track.