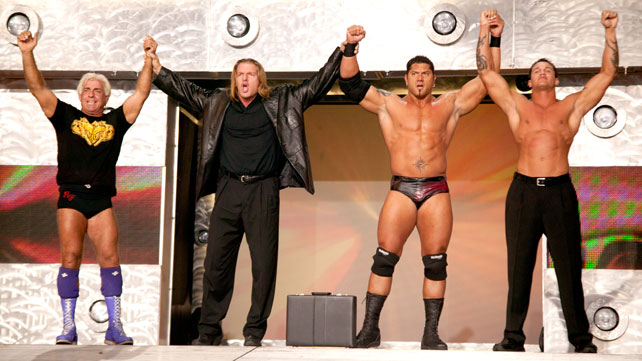 Evolution is a mystery. It feels fitting that this is the first month on PPV that “Evolution” is a faction as we get this return match when everything dealing with these participants the previous month was an unmitigated disaster. WWE’s hands were tied with the ending of that match with Steiner getting a visual submission victory over a bloody HHH tapping to the Steiner Recliner. Still, no one was clamoring for a rematch after what took place at the Rumble and an audible would have be appropriate in this situation. Instead, WWE essentially doubled down by adding more participants into the foray in the form of Batista and Randy Orton. HHH has a stable now and looks to be the main focus of the World Heavyweight Championship division for at least the short term. Any viewer should have been able to predict that HHH would be successful in this defense based on the fact that Steiner blew his shot at Royal Rumble and his crowd reaction on that show. The build up to this match was fairly simple with Steiner beating Chris Jericho to earn a rematch while an angered Flair and HHH look on in a press box. Steiner enters first and I’m starting to think sirens ringing equate to an automatic pop from wrestling fans because the Montreal crowd does give him a good ovation that is mostly positive. HHH also gets a positive reaction though and his entrance really feels like the HHH we associate with currently.

It would be unwise to go blow-by-blow with this match because it is honestly structured in a lot of the same ways as the first one. That is an asinine idea to me given how violently the crowd turned on the first match. Much like last month, I had no problems with the opening of this one. Whereas, the Rumble match started out with a brawling tone, this took a more traditional championship match approach with the “face” getting a quick offensive advantage. HHH comes into this match with a bandaged hamstring that was destined to be the focal point of Steiner’s attack. His work on the leg is basic and rudimentary but not bad and he evens mixes in a figure four, which is a good insult to give with Flair standing at ringside. I despised HHH’s selling of his back last month but he does a much more admirable job here of limping around and selling the damage to his leg. I was cautiously optimistic for the prospect of this match, even when HHH took over and tried to get a knockout blow on Steiner by attacking his head and neck area with big shots, ring post shots and slamming his head against the mat.

Then, in a mirror of the Rumble match, there is one spot where the match falls off the rails. Here, it is when Steiner does his first belly-to-belly suplex. Not a bad spot in a vacuum to take back over on offense, but after the ridiculous display of eight belly-to-belly suplexes in the first match, it was probably a good idea to put that move on the shelf for this encounter. Montreal fans can be pesky, annoying and weird at times but they certainly are knowledgeable and caught right on to him using this spot again in this match. From that point forward, Steiner was the established heel in this match and there was no turning back on that point. Other aspects of this match made it fail as well. One of those was Earl Hebner as referee. Remember we are in Montreal, so randomly during the match the crowd serenaded Hebner with a “You screwed Bret” chant. This would have just been an anecdotal note on the match, but Earl plays a key part later on.

HHH tries to utilize his same strategy of getting himself DQ’d. Earl is wise to the game and refuses to do so even though he is shoved down and Batista and Orton interfere at will. Flair, much like the Rumble match, may be the best performer in this match, losing his shit at ringside and going crazy to gain the victory for HHH. The crowd gets behind Flair and, by proxy, HHH as a result. WWE had seemingly handcuffed its individuals here and HHH and Steiner failed to work their way out of the compromising position in regard to making this match remarkable different from Royal Rumble. Bischoff is a heel authority figure but it seems ridiculous that HHH is able to throw his weight around so much that you either DQ him allowing him to retain his championship or you have to deal with the constant interference of Evolution. Earl finally kicks Evolution out of the ringside area but the distraction has proved to be too much and this actually plays into the finish, allowing HHH to use the World Title to deliver a blow to Steiner’s head. Steiner is able to kick out of that but eats a pedigree a minute later and HHH retains his title on the road to WrestleMania.

I do think HHH was better in this match than in the previous one but I contend Steiner is even worse here. Despite the flaws of his Rumble performance and his conditioning, he at least stayed focused on the back area of HHH in that match and put the onus on HHH whether he would effectively sell the back or not. Here, he moves around from the leg work to the back to simply just clobbering people with punches with no direction or focus. It is really disappointing and feels more helpless with the crowd turning on him more and more with every move. He again does multiple belly-to-belly suplexes, which makes him seem tone deaf. This is essentially the last match of Scott Steiner as a main eventer and the viewer does get the sense that the wrestling landscape has passed him by and he had no way of adapting.

This match is a mess all around. It feels the same as the last month and didn’t help any of the participants involved. Steiner is done at the top of the card and HHH had to use his entire faction to gain an unfair advantage. Evolution may be establishing itself in WWE, but this match transfixed itself back numerous generations and rehashed old ideas that fell flat the previous month. I thought the Rumble match had a certain comedic aspect to it, this was just sad.