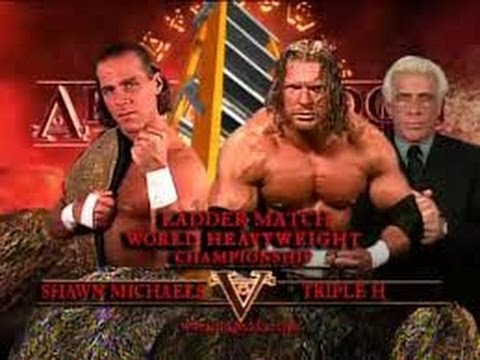 Time to play the Game! I have been toiling along with these Vintage Vault Pre-Viewings for over two years chronologically now. In that time, I have tried to peruse a variety of wrestlers and angles happening throughout the company to get a snapshot of that time. I have done a few themes but nothing long-term. That whole concept goes out the window starting with this show. From now until WrestleMania XX, I will be reviewing every HHH match on PPV. This may seem like a sadistic task from some but I am genuinely interested to see if this bloated time period of HHH dominance is as bad as I thought when it happened 11 years ago. 2003-2004 is the biggest blindspot in my lifelong wrestling fandom. The combination of ending high school and going to college along with not enjoying the aforementioned HHH storylines that plagued Raw (the thought of watching SmackDown instead of going out on Thursday nights was laughable) were enough for me to almost hit the eject button on this hobby forever. I remember being sort of excited to see HBK come back but as someone that was always a Bret guy first, his return didn’t resonate as much with me as many other fans. This match feels like as good a kicking off point as both of these two men just had a classic match at SummerSlam and HBK had just won a World title for the first time in 4.5 years. This was also the first Three Stages of Hell match since the infamous HHH vs. Austin match at No Way Out 2001. To read more about the lineage of Three Stages of Hell matches in WWE, check out this article penned last year by our own Brad Woodling.

The first fall is a street fight. Michaels wearing the Big Gold is an odd site to see. He thankfully has switched to a more traditional white and red trunk pattern for tonight’s match instead of the turd brown disaster he broke out at Survivor Series. HBK taunts Flair when he gets into the ring and Flair takes offense and starts pushing around Earl Hebner. Hebner takes charge and ejects Flair from the match, enraging him. No one can quite throw a fit like The Nature Boy. The opening moments of the match feel a little shaky with each competitor gathering their bearings and barely saving themselves from wiping out on some spots. Weapons come into play quickly with a trashcan. HBK misses a dive to the outside and is responded to with a clothesline and sent into the guardrail. HHH is hobbling on his right leg that is heavily taped. HBK does a nice kick to avoid a trashcan shot and then hits a crossbody onto HHH holding the trashcan. A table is set up. HHH is able to block a suplex through that but is sent face first into the ring steps for his troubles. So far this match is fine but I just saw a heated, intense Hell in a Cell battle between Brock and Taker two months earlier that had more of a desperate feel than the early going here. Even HHH and HBK themselves had a more viscerally violent match at SummerSlam.

HHH is able to turn the tide, sending the trashcan into Shawn’s face with a big boot. HHH is really favoring that injured leg. He sets up another table and a big spot is looming. Michaels this time blocks the suplex into the tables and hits one of his own. They are doing a good job setting up and teasing these tables for a big payoff spot later. HHH is able to regain an offensive advantage too easily for my liking with a high knee and our first chair is brought into the match. HHH starts honing in on HBK’s back and goes for a side slam onto the chair. However, HHH is reversed into the chair and now he is wincing in pain from the lower back region. HBK sends HHH into the turnbuckle and the ring apron on the outside. A viscious sounding trashcan shot to the back has HBK firmly gaining an advantage. The first Sweet Chin Music attempt of the match is blocked by HHH and he goes to work on the leg.

HHH wraps HBK’s leg around the ring post and he winces in pain. Shawn’s overselling has been problematic for me in his comeback but he plays this with the correct temperament and doesn’t oversell it in the early going. HHH, for his part, does a good job of varying his offense and remaining focused on the leg with elbow drops and submissions. After a lengthy figure four battle, HHH hits a nasty trash can lid shot and starts dragging HBK to the entranceway. Shawn is still admirably selling the left leg. This is fairly uninspiring stuff by HHH and seemed as a complete set up to get to the barbed wire, flaming 2X4 shot. HBK is able to hit HHH with it and HHH is busted open.

After returning to the ring, HBK gets a trash can lid shot as retribution for earlier and sets up a chair. HHH again reverses the tide of this match and drop toe holds HBK on the chair and hits a DDT. There have been too many paradigm shifts in the first fall of this match disallowing the match to fall into a natural ebb and flow. HHH attempts for his first pedigree but he gets punched in the balls and Shawn hits a flying forearm and a kip up. In a great move, HBK kips up reinjures his leg and HHH is able to capitalize immediately with a Pedigree to win the first fall. This was a clever finish that shows Michaels was still overconfident to a degree and HHH as the ultimate opportunist. 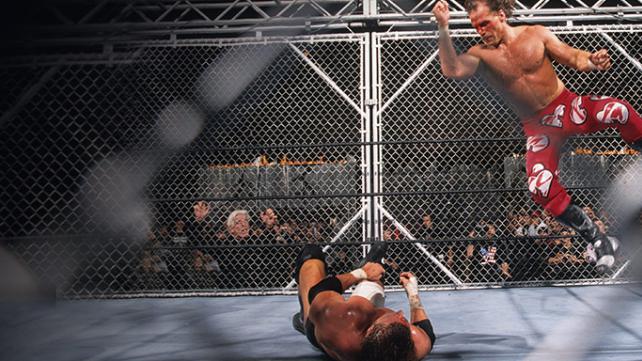 The steel cage lowers for our second fall and HHH wastes no time hitting Shawn with a trash can. A table is set up in the corner by HHH. HBK avoids that but does het catapulted into the cage and now he too is busted open. This has been the second best control segment of the match so far besides the leg work that was done earlier. HBK looks like he is barely able to hang on and the World title is in serious jeopardy. Florida crowds are not generally known as some of the WWE’s best, and this one is pretty dead for this sequence. Shawn makes a comeback to a weak response and hits a thesz press. HHH is able to shrug that off and is looking to bail from the cage and win the belt in the process.

Shawn and Hunter are both perched on top of the cage as Flair makes his return to ringside. Flair sets up two more tables as the action on top of the cage between HHH and HBK is pretty dreadful and uninspiring. HHH crotches himself on the rope and Shawn hits his top rope elbow. Flair is able to enter the cage but he gets attacked by HBK. HBK attacks him with weapons and Flair is busted open. Managers loved blading in 2002. Again, the impact of this is softened a bit by what we saw two months before. I also liked the fact that in the Hell in a Cell match, Heyman was never able to physically enter. Shawn fends off both Flair and HHH and sets HHH on a table. He then hits a big splash from the top of the cage sending HHH through the table to even things up.

Flair is an absolute mess as they set up the third and deciding fall, which is a ladder match. I don’t feel great about critiquing Shawn diving from the top of the cage but he got absolutely no elevation on the dive. Michaels rams the ladder at HHH’s head and drops it on his back. A suplex on the ladder has HHH taking a nasty bump on top of it. I have been tough on Lawler for most of his commentary throughout the year but him and JR have been back to their beginning of the Attitude Era form in this match, doing a great job of calling the action. HBK sets up the ladder in the corner and wipes out on a splash that looked nasty and dangerous with his body falling face first to the mat. HHH hits the second Pedigree and starts crawling towards the ladder. HHH starts the long ascension up to the top of the ladder and HBK is able to pull him off and hit a desperate Sweet Chin Music that sends HHH careening to the outside. HBK now does his neverending climb to the top, but of course HHH is able to topple over the ladder sending Michaels into taking a nasty bump through the tables set up on the outside. This allows HHH to climb the ladder and regain the World championship while King questions whether Shawn is breathing or not.

I swear that I am coming into this series with an open mind, but this first installment proved to be a disappointment for me. Match lengths and their necessity has been discussed in the internet corners I frequent lately, and this match was a prime example of a match aspiring to be long and epic in spite of the things that would make it most effective. These two heated rivals having a great hate filled ladder match would have been perfect. The match could have ended the same way and I would have been happy. As it stands, the Three Stages of Hell stipulation feels tacked on and both the steel cage and ladder match portions were setups to one specific spot. I also think the match had way too much back and forth action. Shawn did his best performance in this match selling his leg and HHH was at his most focused honing in on that. The brawling on the outside felt meandering and uninspiring. The match has some nasty spots and both guys did try, but there bloated efforts and stubbornness on having this type of match failed to make the big spots or the match as a whole resonate.