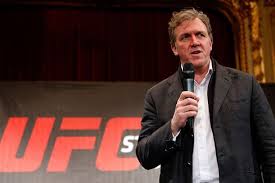 While the UFC was in Manchester this past week, UFC Vice-President of Europe, the Middle East and Africa (EMEA) Garry Cook gave some big details on the organisation’s plans for European expansion in 2014. While Saturday’s Fight Night Manchester was just the third event in Europe this year, two of which have been in the UK, the UFC have scheduled six events for 2014 taking in two new countries.

The UFC will begin their European endeavors in London at the O2 Arena on the 8th of March, with a card we already know to be headlined by Alexander Gustafsson taking on Antonio Rodrigo Nogueira, with a re-match between Ross Pearson and Melvin Guillard also announced. From there the UFC will head to Berlin in April and Dublin in May, with Poland and Turkey making their debuts later in the year. The UFC will also visit Sweden again in 2014 but this time with an event in Malmo, and without Gustafsson on the card. The event in Berlin will mark the UFC’s first visit to the country since UFC 122 and the first event in the German capital, while Dublin will end a five-year absence of events in the country. Cook revealed that Dublin had been planned for April but had been pushed back, and strongly hinted that this was to accommodate the recovery of Conor McGregor.

The decision to have Gustafsson fight in London is significant, and makes the planned March event arguably already the strongest card in several years. While some fans have complained of not having fights of significance or a high enough level on the cards presented in England, this is not a criticism that can be leveled here – Dana White confirmed that should Gustafsson defeat Little Nog and Jon Jones overcomes Glover Teixeira, the two will meet again in a rematch of their UFC 165 classic. If that isn’t significant I don’t know what is. After the anti-climactic no contest in their fight on Saturday, both Guillard and Pearson were clamoring for a re-match and Garry Cook was more than happy to oblige. Conor McGregor was angling for a fight on this card too, but it seems to make sense and follow from Cook’s hints that he will feature prominently in Dublin instead. Michael Bisping is scheduled to return to competition in April, meaning he is unlikely to feature in London.

What kind of card the UFC will put on in Turkey remains something of an intriguing question. While every one of Saturday’s originally scheduled fights featured a British fighter, currently there are no Turkish fighters in the UFC. Even with the UFC hiring a matchmaker in Europe to scout talent in the coming months, it is hard to see how such a person could find talent and have them elevated to main card status in a year. Poland will have similar issues, with most of the Polish fighters currently on the UFC payroll not having made any great waves.

Asked about a UK-based and produced series of The Ultimate Fighter, Cook said it would be “professionally naive and foolish” not to. Producing content in the UK for the UK market was a hot topic of conversation, as Cook revealed that the plan was to have the European events produced specifically for the European market and franchised to international markets separately.