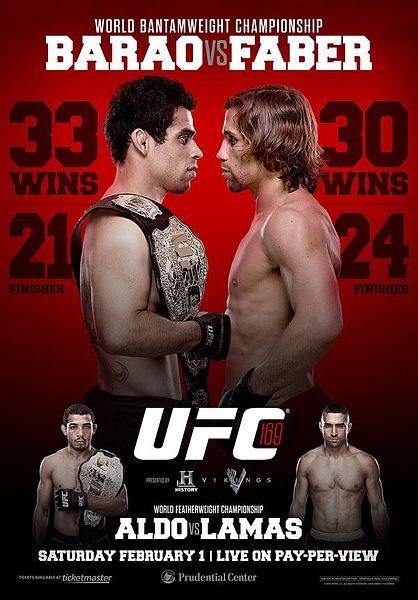 Guess who’s back, back again… Cowboy’s back… tell a friend. That’s right fight junkies the Cowboy is back! After taking a bit of a hiatus, I’ve taken over the MMA reigns here at PTBN. I know I have big shoes to fill, but the Cowboy is up to the task. Here’s what you can expect: For each ppv card and any non-ppv card featuring a title fight, I’ll be providing an in-depth preview of the main bouts which we will post on the Friday before the fights. These will feature analysis and everyone’s favorite “Cowboy’s Call” predictions.  The following Monday I’ll post a recap and take a look at how my calls turned out. Without further ado, let’s get right to this weekend’s ppv card headlined by the Renan Barao vs. Urijah Faber rematch for the UFC Bantamweight Title. This was originally going to be Dominick Cruz’s long-awaited return from injury, but unfortunately it was not in the cards. Cruz was felled by another injury and Faber was more than willing to step up to take another crack at the Brazilian.  The card also features the dynamic Featherweight Champion Jose Aldo defending against the rugged Ricardo Lamas and a heavyweight tilt between former champion Frank Mir and Dutch destroyer Alistair Overeem. Let’s break it down!

This is a rematch of their tilt at UFC 149 that Barao took by wide unanimous decision. Since then, Faber has reeled off four consecutive victories against high quality opposition, which makes him very well deserving of this rematch. In the same timeframe Barao has successfully defended his title twice. In his most recent outing he dispatched of the dangerous Eddie Wineland with a vicious spinning back-kick in the second round.

In their first encounter, Barao was able to keep the fight standing where he has the clear advantage. He followed the blueprint laid out by countrymen Jose Aldo and battered Faber’s lead leg repeatedly with kicks that significantly weakened the California Kid, particularly his ability to shoot for takedowns. At age 26, Barao is entering his physical prime and has the look of a champion who can rule the division for years to come. I expect his game plan for the rematch to mirror closely what he did in the first fight. The last place he wants to end up is on his back against Faber, who is a significantly better wrestler than the champ. He will use his kicks to set the distance and try to punish Faber with knees and uppercuts on the way in.

For Faber, he must find a way to close distance better than he did in their first encounter. Once inside he can utilize his clinch game and look for takedowns. If he is able to drag Barao to the mat, Faber possesses the best ground and pound in the division and is also a slick submission artist from top position. You can’t discount how good Urijah has looked in his last four victories. He is coming in confident and truly on the top of his game. I expect a better Urijah Faber to show up for this fight than their first tilt.

Cowboy’s Call: While I expect this fight to be more competitive, I can’t pick against the champion. Faber has a recent history of underperforming in title matches and Barao is just too good. Barao could really make a statement by knocking out Faber (he hasn’t lost a fight by KO since 2008). I say he does it. Barao by 4th rd KO.

In a bit of a rarity we have a second world title fight scheduled as the co-main event. No complaints here! Jose Aldo, my pick as the top pound for pound fighter in the sport today, takes on Ricardo Lamas. Aldo comes in with a perfect record in the UFC and has not lost a fight since 2005. A huge featherweight, he poses problems to his foes with a combination of lightning fast strikes and concussing power. He also possess a great shot. These traits give Aldo the ability to keep the fight where he wants it, when he wants it. Aldo is a fast starter and will certainly test the rugged Lamas early. The one chink in his armor has been that, if dragged into the championship rounds, he tends to fade. Fortunately for Jose, all of his opponents have either failed to get to these rounds or have been so hopelessly behind on the scorecards that their late rallies proved futile. In this fight, I expect Aldo to set the tone early and keep the fight standing. He has a decided edge in the striking department and will make Lamas pay early and often as he tries to close the distance.

Lamas has an extremely tall order in front of him. The one area that he would appear to have an advantage on Aldo would be wrestling. The problem is he has to get close enough to shoot without getting knocked out. His best chance to win is to survive the early rounds while applying constant pressure to the champion. If he can tire Aldo out early, he has the ability to capitalize in the later rounds.  Again, this is easier said than done.

Cowboy’s Call: This is a pretty easy fight to call. I like Aldo by KO in round 2.

Both fighters in this contest are badly, badly in need of a win. Mir has dropped his last three fights and Overeem has lost two in a row. Both of these heavyweights have not exhibited the best gas tanks in the past, with Overeem’s being particularly terrible. Before he gets tired, Overeem is the most devastating finisher in the division.  He is able to finish fights with a lethal combination of precise striking (particularly with his kicks and knees) and brute power. If the Demolition Man gets you hurt, he knows how to close the show.  He is an adept ground fighter, possessing brutal ground and pound. His problem is that all of the extra muscle he is carrying to give him that power makes him tire very quickly.  Against Travis Browne, Overeem had him all but out in the first round. He went for the finish, didn’t get it, and had absolutely nothing left allowing Browne to knock him out in the same round. If I’m Overeem I don’t let that get in my head against Mir.  Mir has shown a breakable chin in the past. Alistair should go for the knockout early.

Mir, as stated previously, is on a three fight losing skid. While his quality of opposition has been ridiculously high, a loss to Overeem basically ends his time as a heavyweight contender. Mir is the most gifted submission artist in the division and has a very dangerous guard. There is a good chance that Overeem ends out on top of him early which may provide Frank with his clearest path to victory.  Mir has good boxing skills, but is no match for the K-1 champion Overeem on the feet. He also won’t be able to take Alistair down.  Other than submission his best chance for success is to follow the Browne blueprint of weathering Overeem’s early storm and hoping he runs out of gas later in the fight. This may prove challenging for Mir as he has also shown the propensity to tire later in bouts. Mir is a solid fighter who has been in with and beaten the best the division has to offer so you can’t count him out.

Cowboy’s Call: This is the fight on the card I am most looking forward to… call me nostalgic. Say what you want about Overeem, but he is never in a bad fight. My heart says Mir lands the submission off his back after being rocked early by the Dutchman, but the Cowboy doesn’t pick with his heart. Overeem takes this one by KO in the first three minutes.

I hope you all are as excited for tomorrow night as I am. It should be an exciting night of action. Check back Monday for my recap. Cowboy out!