Last night in Toronto two light heavyweights went to war, Renan Barao showed his dominance, and two up and comers stepped up their game. 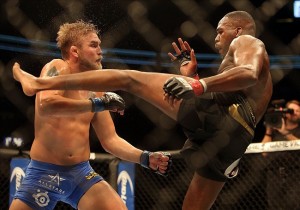 After fighting middleweights for a few years, the UFC did everything possible to tell every single potential UFC audience member than Gustafsson didn’t offer Jones that same size and height advantage to the point where most of the MMA media sneered in derision. However, as the fight unfolded before our eyes it became clear that this was far more significant than many had given it credit for, and Gustafsson dominated round one by keeping Jones at bay and landing well with the straight right hand. In round two Jones managed to adjust and land some good strikes and kicks of his own, but Gustafsson displayed impressive takedown defence to thwart what has been Jones’ greatest weapon at times. In eleven attempts, Jones only managed to take Gustafsson down once in the 5th round, and even then he couldn’t advance beyond guard and make it stick longer than 30 seconds. Jones was cut in the first and as the fight wore on he began to bleed badly, with Gustafsson dodging the spinning elbow on most occasions, until Jones managed to land a significant one to open up the Swede. While Jones seemed to take the second clearly, the third round was possibly the closest of the fight. Heading into the championship rounds the champion had two swollen eyes and a swollen mouth, while Gustafsson looked tired and was also bleeding his fair share. Jones managed to land some good strikes in round four and rallied well in round five, but neither were decisively his rounds. As the decision was being announced breath was held all around the world, and while many were disappointed at Jones retaining no one could really argue with the scoreline of 48-47 in his favour. One judge managed to see the fight 49-46 which was just unthinkable, and many pundits have called this the fight of the year. Afterwards Jon Jones was helped out of the cage and loaded into an ambulance, while Gustafsson was able to do media interviews afterwards. The Swede’s stock will rocket with this performance, and many are now already talking about a rematch down the line if not straight away. 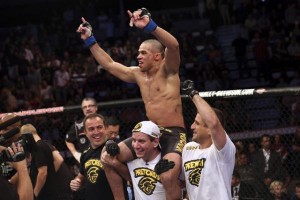 In the co-main-event of the evening, and the first title fight to take second billing on a card in over a year, interim bantamweight champion continued his total dominance of the 135 pound division in brutal fashion, finishing former WEC champion Eddie Wineland after a spectacular spinning back kick. In the first round Wineland held his own remarkably well in a tight round, with the two going back and forth in a cagey affair. After the break however, it took Barao just 30 seconds to take Wineland apart. According to Dana White the defences of the interim bantamweight title are over, and either Dominick Cruz will return early next year for a hotly anticipated unification fight, or Barao will be promoted to undisputed champion. Obviously it would be infinitely preferable for the former to happen, and Cruz .vs. Barao is a fight that will have hardcore fans salivating. Barao is easily one of the best pound for pound fighters in the world today and his unbeaten run now stretches back 31 fights to 2005, and he will be very tough to beat for any 135 pound fighter.

In a bout between two former friends and former Ultimate Fighter team mates, Brendan Schaub submitted Matt Mitrione in quick fashion with an impressive D’Arce choke. After this fight was announced some harsh 140 character words were exchanged, and both did their best to hype this fight up as much as possible. In the end the two seemed very evenly matched on the feet, but once Schaub got the fight onto the ground his high level jiu-jitsu game took over leading to the dominant victory. Schaub is a very athletic heavyweight, and his speed and agility makes him dangerous for anyone in the heavyweight division. 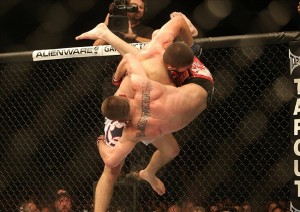 Opening up the main card were 20-0 Russian Khabib Nurmagamedov and experienced scrapper Pat Healy in a fight that was a huge test of whether or not Nurmy (as we shall call him) could live up to the hype. Well, he delivered and then some with a dominant wrestling display to take a 30-27 unanimous decision. Healy took some real punishment here including a Trigg/Hughes-esque slam after being carried the length of the cage. Nurmagamedov is now 21-0 and 5-0 in the UFC and asked for a titleshot, though I would rather see him fight a top contender like Rafael Dos Anjos or Gilbert Melendez next. Either way, this kid is undoubtedly the real deal. In a fight that was very much flying under the radar Francis Carmont put on a dominant grappling performance that surprised many. Despite being considered by most to be a kickboxer, he neutralised the dangerous striking ability of the hot prospect Philippou by spending 12 out of 15 minutes on the ground in top position, leaving Philippou looking utterly defeated and frustrated. Perfect timing on the takedowns and solid ground and pound showed a new dimension to the Frenchman that has to take him into the top ten of the middleweight division.

On the FS1 prelims Myles Jury took a dull decision victory over Mike Ricci, while Wilson Reis looked impressive in victory over the experienced Ivan Menjivar. Dustin Kimura saw his undefeated record broken by Mitch Gagnon, surprisingly losing by submission, while both John Makdessi and Stephen Thompson looked impressive in knockout victories. Before the fight of the decade at the end of the show, Alex Caceres and Roland Delorme had my fight of the night, with an impressive display of all facets of mixed martial arts. Some of the best grappling I’ve seen and some crisp striking before Caceres took a split decision victory.