2018 has been a decent year for music thus far with high profile releases from Kanye West, Dave Matthews Band, Drake, Nas, and Judas Priest, just to name a few. This list will tell the fine readers of Place to Be Nation what I think are the top albums of the year so far. These albums are in no particular order… Except for number 1… Nothing will top my number 1… Nothing.

15 years since the release of their last album Dopesmoker, Sleep returned with this incredible album. Announced on April 19th and released on April 20th, this album encapsulates what makes this band so great. The long, droning riffs from Matt Pike, excellent drumming from Jason Roeder, and the incredible bass playing and vocals from Al Cisneros make this album a must listen for anyone who is even a minor fan of slow, plodding, heavy music. I’ve been listening to this album regularly since it came out and I don’t plan on getting sick of it any time soon. Drop everything and go listen to it!!!

When Kanye West announced that he would be producing (and featured on) a number of albums that would be released in 2018 including his own album, a Pusha T album, and a Nas album, this was the offering that I was the most excited about. A collaborative effort between Kanye and Kid Cudi, this album features some of the best beats I’ve heard on a rap album in a long time and the production quality throughout the album is tremendous. The first time I heard “Feel the Love” (which also features Pusha T), the song was stuck in my head for days. This album is easily the best of the Kanye produced albums released this year. 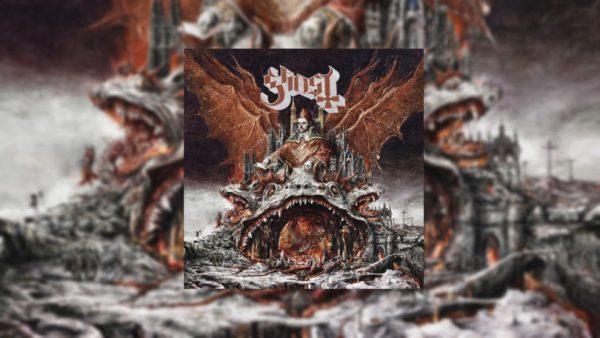 These theatrical, costumed rock and rollers released their 4th full length album on June 1st and while I don’t think it’s their best album (that honor goes to 2015’s Meliora) I still think that this is a very good album that features some of my favorite songs this band has ever had. For those that don’t know what this band is all about, it features a “new lead singer” for every album. The first three albums featured Papa Emeritus I, II, and III respectively. This time out, Cardinal Copia takes the reigns as all three of the prior lead singers have since retired. The reality is that Tobias Forge played the character of all three Papas’ and is now donning the Cardinal Copia garb. He is the lead singer for this album and has done an amazing job singing, writing, and creating an aura around the band that hasn’t been seen in years. (Tobias Forge wasn’t officially revealed as lead singer until 2017 when a lawsuit concerning the band’s profit sharing featuring former members of Ghost’s backing band, The Nameless Ghouls, was made public.) “Rats” is a phenomenal song with a tremendous music video and I can’t for the life of me understand why “Dance Macabre” isn’t a massive hit. Tobias Forge is a master of writing catchy, hook laden songs and this album is no exception. I completely understand why this band’s gimmick (dressing like satanic priests) would be a turnoff but give them a listen. You might be pleasantly surprised like I was when I first listened to them years ago.

The first album by this Oregon based doom metal band since lead singer Mike Scheidt’s near fatal bout with diverticulitis, this album is one of the most emotional listening experiences I’ve had. Most of this album was written while Scheidt was in a hospital bed recovering from the aforementioned diverticulitis and it makes for a moving listen. While listening to this album for the first time I noticed that Scheidt sounded different than he did on previous YOB outputs. He sounds weathered and beaten down. It’s almost as if the bout with diverticulitis changed him. You can almost hear the pain in his voice while listening to the songs. I really love the way this album sounds. The guitars are loud in the mix but not so loud that they are overbearing and the drums sound massive. While I don’t think this album surpasses YOB’s last release (2014’s Clearing the Path to Ascend), this album is still a great listen and a lock to be on my year end favorites list.

On June 29, my favorite album ever was rereleased in a massive deluxe edition featuring a remastered version of the original album along with 61 bonus tracks. Most of the bonus tracks consist of songs that were recorded during a 1986 session at the legendary Sound City recording studio. Songs include “Shadow of your Love” which was previously unreleased, a version of “November Rain” with Axl Rose singing and playing piano without the aid of Slash or any other members of the band, and covers of the Elvis Presley song “Heartbreak Hotel” and the Rolling Stones song “Jumpin’ Jack Flash”. There are multiple versions of this box set available to buy but the one that caught my attention was a $999 version which comes with the original album remastered, the bonus tracks, all kinds of Guns N’ Roses goodies and memorabilia, comes in a wooden Guns N’ Roses box that’s covered in faux leather, and has a hand painted Guns N’ Roses cross on the front of it. I bought the individual bonus tracks on iTunes and was more than satisfied with my purchase. This is a great set and is a great snapshot of the “Most Dangerous Band in the World” at their peak.