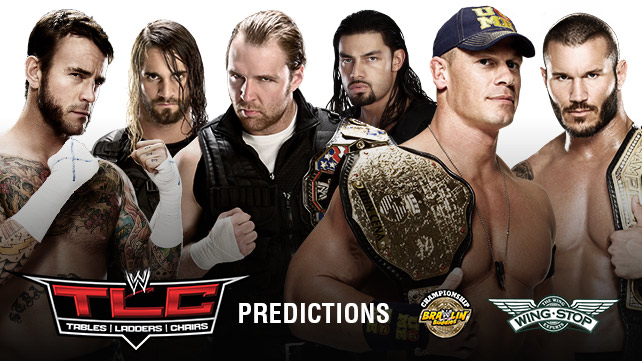 This Sunday we conclude the 2013 WWE PPV schedule with TLC, live from Houston (not Helena).  The year has had its ups and down on PPV, with some great shows and some real dogs.  What will this Sunday bring?  Well the card is unorthodox to say the least with a TLC main event that has history and confusion attached to it, not one but two handicap matches and a rare (sucks to say that) Intercontinental Title match.  So let’s dive into the card and see what we can accomplish.

Wow has anybody fallen off the map further than Dolph Ziggler.  The day after WrestleMania he was the hottest thing in the company after cashing MITB in on Alberto Del Rio and blew the roof off the IZOD Center.  Then two things happened that totally derailed it.  First he suffered a concussion at the hands of the clumsy Jack Swagger and missed about six weeks, including the Extreme Rules PPV.  That was a total momentum stopper.  Second, his valet was getting more face pops that he did.  AJ Lee became a star heel and when Dolph was organically (sort of) turned face he looked like a schmuck.  So as the year progressed he fell further and further until he was the only guy that Damien Sandow can beat.  Fandango has been hot, cold, hot, cold.  Summer Rae is coming into her own but unlike AJ her energy is helping Fandango a bit and the fact that he’s no longer being shoved down our throats has made him more stable on the roster.  It will be a good match, but Dolph needs it more.  SCOTT’S PICK: Dolph Ziggler

We’re starting to learn about a group of young guys that have a sheen on them.  They’re called the “John Cena Clique”.  Cena seems to be latching on to guys backstage who have that “something”.  Big E. Langston is one of them.  His promo skills are still a little shaky but he’s a brick shithouse in the ring and that’s what Vince likes.  Damien Sandow has become another enigma.  He has a good look, solid in the ring and tremendous promos skills.  However some feel his gimmick isn’t one that would cultivate a main event run.  Not everyone has to win when they cash MITB in.  John Cena didn’t last year.  I think it will be a solid enough match with Langston eating some heel offense from Sandow.  Then he’ll make a comeback hit his finisher and win.  Simple enough, un-offensive.  Sandow needs the win, but he’s not Cena’s guy.  SCOTT’S PICK: Big E. Langston

This is a good way to get a bevy of guys on the show.  Cody and Goldust have been smoking hot since their win at Battleground, including a huge pop on Raw when they won the tag titles from The Shield.  The Real Americans, who were a huge joke when they first got together, have slowly gained some credibility with some big TV wins, including against the Tag Team Champs.  Antonio Cesaro, who was in Damien Sandow’s position about five months ago, is getting some face pops with his airplane spin-type finisher.  Curtis Axel and Ryback are nothing more than jobber crew now after their break from Paul Heyman.  As for our last team, I don’t know what to make of it.  Show and Rey are an odd combination and I remember the feud in 2003 when Show swung Rey into the steel post at Backlash.  Do we want to see this feud again?  Absolutely not.  This may just be to fill the match with a fourth team.  If so, why not the Usos?  They’re a team at least.  Weird.  I’m going to buck the trend and pick the Real Americans in an upset, as Cesaro hits his finisher and pins Curtis Axel.  Gives the Rhodes Brothers a chance to chase the titles without being pinned and leads to something to have on the free TV shows between now and the Royal Rumble.  SCOTT’S PICK: Real Americans

AJ is easily a top five candidate for one of the most important superstars of 2013.  She has stabilized the (Real) Divas division with great promos and good workrate.  Natalya is a (Total) Diva who in my opinion doesn’t belong with that group of (Total) Divas because she’s clearly the best worker in that group (Who the hell is Jo Jo again?)  This reeks of AJ’s run coming to an end, but why?  Total Divas’ season is over so it’s not like it would boost any of those (Total) divas TV time anyway.  Time to focus on the (Real) Divas division, and that means sticking with who brought you.  It will be a fun match that I think may get more time than most Divas matches, but the champ retains.  SCOTT’S PICK: AJ Lee

CM Punk vs. The Shield

Ok, the minute Kane mentioned this (and the next) match on Raw I was completely stunned.  Why for the love of God do you put two of the hottest babyfaces on the roster, against the two hot heel factions on the same show?  Sure there’s collateral damage in terms of who gets pinned, but this is still crazy.  I think Punk loses here, because he pretty much admitted on Raw “I’m going down, but I’m taking The Shield with me.”  To me that is getting in fans’ heads that losing the match won’t hurt Punk, as long as he goes out with all guns blazing.  This is turning into an extension of the “Authority” feud, as evidenced by Triple H grabbing CM Punk by the hair on Raw and Punk’s continuous jabs at the first couple.  As awesome as Punks 2012 PPV record was, his 2013 record is substandard.  That’s no big deal, so eating a pin in a handicap match isn’t the end of the world.  He will take out Ambrose and Rollins, but after a grueling 17-20 minute match, Roman Reigns hits a spear and gets the pin.  SCOTT’S PICK: The Shield

Daniel Bryan vs. The Wyatt Family

The philosophy behind this match is a little different than the previous match.  The backstory here is that Bray Wyatt wants Bryan to join “the cause” or else he will be taken care of.  Daniel Bryan’s chances of winning are slightly higher than Punk winning for a few reasons.  As “annoyed” as WWE is that the crowd Monday night loved Daniel Bryan so much that they “hijacked” their ending segment, they can’t deny he is the hottest guy in the company right now, even hotter than Cena or Punk.  Also, Rowan & Harper can definitely be beat up and pinned without any fallout to the Family as a group.  Ambrose is US Champ and Rollins (although he’s been the fall guy before) is slightly higher in the pecking order than Rowan & Harper.  Then there’s the possibility of an “Authority” issue pertaining to Kane or someone else that could lead to a countout or DQ win for Bryan.  Sure that can happen in the Punk match too, but not both.  That’s just bad booking.  I don’t want to change my pick, but I’m more hesitant to pick the Wyatts than I was the Shield earlier in the show.  I’m going to think the numbers game hurts Bryan and outside interference gets the Family the win.  SCOTT’S PICK: The Wyatt Family

Boy as entertaining as that last segment on Raw was this week, it caused a huge scuttlebutt backstage afterwards.  From the brass being pissed at the crowd, to Bret Hart being pissed at Orton, to Orton being pissed at Cena.   Key Arena was a huge ego powder keg that was about to explode.  There’s a lot of pundits and analysts who think The Authority interferes and helps their boy Orton win the belts.  However this is a long term booking situation, not a short term booking situation.  When fans look back thirty years from now at the first time unification truly happened (sorry Chris Jericho, no disrespect), they want the face of the company attached to it.  I’m done with Randy Orton.  He’s a selfish, whiny asshole who is unreliable.  People forget he is one strike on the wellness policy away from being FIRED.  Now the cynics can say “Well, they’ll hide it.”  Frankly they didn’t hide the others.  Orton apparently was pissed that Cena took liberties during the ending promo that he was entitled coming through the ranks but became a lazy asshole who whined when he didn’t get his way.  So when they look back at the history and the gravity of the moment, John Cena is the safe bet here.  Now looking ahead to 2014, I don’t think either of these guys will be involved in the main event at WrestleMania.  So I also think that the theory of “Which one of these guys would take the title to WrestleMania” isn’t going to apply here.  The match itself will be awesome because regardless of what we think of either of these guys, when it comes to main events they do deliver when they have to.  I think there will be no interference and Cena wins this one clean.  SCOTT’S PICK: John Cena

There is your rundown of Sunday’s TLC PPV.  Join us Sunday night at Place to Be Nation starting at 7 for the TLC Live Blog featuring myself, Brad Woodling, Justin Rozzero and anybody else that possibly runs-in.  Will history be made?  Will the crowd “hijack” the show?  Will Mick Foley fit into his suit?  We shall see.