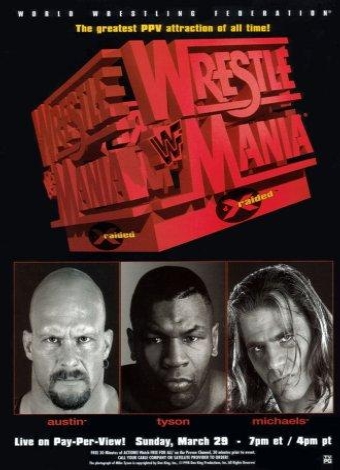 As we continue down the road to the biggest show of the year, I’ve been going through each event to prepare for the big day.

Instead of doing recaps for every WrestleMania (other people here do that much better), I’ve been putting together a Top Ten list of WrestleMania matches and have been updating it after each show.

The first WrestleMania I missed watching live on pay-per-view since the second event, as I was a freshman in college. Despite being in school in Boston, I was poor and couldn’t afford a WrestleMania ticket. Instead, I listened to the audio feed the WWF offered on its website, the first time I would use the internet to catch a WrestleMania, but not the last.

The Attitude Era was in full swing in the spring of 1998. While the WWF was still falling behind WCW in the Monday Night Wars, the tide was turning. The ratings were with Monday Nitro, but the better matches were happening on Raw, along with the more compelling angles and characters.

Deciding to pull out all the stops against the new wrestling standard-bearer, Vince McMahon enlisted “The Baddest Man on the Planet” – no, not Marc Mero – to be an integral part of the main event angle. Mike Tyson would be named as the “special enforcer” for the WWF Title match, adding an intriguing element to a contest between two competitors nowhere near 100 percent9.

Best Match: Shawn Michaels vs. “Stone Cold” Steve Austin – WWF Title Match. One year after competing in what is up until this point the greatest match in WrestleMania history, the situation was a bit more dire for Austin. Still recovering from a broken neck suffered at SummerSlam, the new standard bearer for the WWF was in the ring with another great competitor in Michaels, who after this match wouldn’t wrestle again for four years. Still, despite significant handicaps, these guys put together a hell of a match, enhanced by “special enforcer” Mike Tyson. The match was a perfect starting point for Austin’s reign at the top of the mountain, and the catalyst for putting the WWF back in the game.

Worst Match: Goldust/Luna Vachon vs. Marc Mero/Sable. I’ve never understood Sable’s appeal and mixed tag matches are almost always train wrecks. While I would say this was better than the two previous WrestleMania mixed tag team matches (one featuring Goldust’s dad and another also featuring Luna), this match is little more than an angle and it went about twice as long as it really needed to, making it all the worse.

Tag Team Showcase: For the second year in a row, WrestleMania featured a tag team title match and a match to name the number one contender to the tag team titles. Somehow, after years of a very depleted tag team roster, there were 15 teams available for a Battle Royal. Sure, they weren’t the best teams in the world, but at least the effort was there. But I’m still pretty convinced the tag team battle royal was only an excuse to put Sunny front and center in a ridiculously skimpy outfit, and you won’t hear me complain about that. The tag team title match between the New Age Outlaws and Cactus Jack/Chainsaw Charlie was also a lot of fun, even if the decision was eventually reversed, nWo-style.

Missed Opportunity: After the Montreal Screwjob at Survivor Series 1997, it would have been a perfect time to give Owen Hart a serious push and make him a main event player. Pushing him as angry and looking for vengeance for what happened to his brother would have been an ideal way to make him another top-tier guy. As the WWF entered a new era with this event, losing one of its MVPs of the last few years, creating a back-up top guy would have been a wise move. Maybe Owen’s heart (no pun intended) wasn’t in it any more, but it made little sense to me to have him lose to Triple H.

The Top Ten stays static this time around.

WrestleMania XIV scores three big celebs in the first list! One of the additions will likely move up in the rankings as his involvement in WrestleMania continues into the next two years.

Steve Allen rehearses in bathroom with the Bolsheviks – WrestleMania VI