The story of Bajor, as it’s been presented to this point in Deep Space Nine, has been seen almost exclusively through Kira Nerys. It’s been a story of a woman whose lifelong struggle for one very specific goal, for the Cardassians to leave her home, has been fulfilled, leaving her with a commission in the now-formal military but without a concrete goal. The one story DS9 has presented that was primarily about Bajor’s postwar status, “Past Prologue,” focused on a particular extremist cell who didn’t consider their war to be over yet; “Battle Lines” takes the internal conflict that that caused in Kira and creates an alien society that reflects the end-state of the idea that the war is ever-lasting.

The Ennis and the Nol-Ennis believe they’re involved in a war without end, and are resigned to it. Certainly, by the time of “Battle Lines,” it’s a war without a beginning: like family feuds and wars all over fiction, the exact resource or offense that sparked their conflict has been lost to the mists of time. They’ve not only reached the end of history, but lost any sense of it in a monotonous weave of incidental skirmishes. The Punishment, as they call it, feels like a story element borrowed from a fairy tale: for generations no peace could be brokered between the two sides, until finally a larger authority plucked them out of their home, gave them a singularly unimpressive hellscape to fight over, cursed them with immortality, and left them “as an example for the rest of civilization.” And there they lived horrifyingly ever after.

No matter what weapons the two factions started fighting each other with, they’ve reached their sticks-and-stones phase. After one battle toward the climax of “Battle Lines,” the undead, slaughtered-and-resurrected members of both sides simply rise up and slump off their battle field rather than resuming the battle immediately. After so much fighting, the post-resurrection exit must be a well-rehearsed ritual.

Over the course of “Battle Lines,” the series regulars who crash on the moon where this permanent morality tale has been set up have different reactions to the ongoing struggle. Sisko tries to negotiate a cease-fire based on the promise of escape and resettlement, briefly appealing to the rank-and-file soldiers to reject their warmongering leaders, only to be undone by the paranoia on both sides. Bashir tries to offer a medical solution, a way to make everyone mortal again and restore the fear of death as a deterrent, only to be undone by the sudden zeal of the Ennis to finally be able to kill their enemies permanently. Kira, meanwhile, sees herself as a very good hammer in a field of nails, and immediately starts suggesting better ways to fight the war without end without much attention paid to exactly why that war is being fought; ever the pragmatist, Kira is used to focusing on the task at hand, which for most of her life has been staying alive. The episode’s opening gag, though, in which Kira is aghast at an old Cardassian reconnaissance report that lists her as a minor operative in the Bajoran resistance, suggests that Kira’s expertise in warfare will not be the focus of the episode.

Regardless of the particular war set up in this episode, Star Trek as a narrative framework has to believe that there’s a better way. Star Trek has to believe that every conflict can be resolved, whether or not a particular story depicts it being resolved. Deep Space Nine is a series about what it takes to put in the long-term work to confront conflict, and to heal from it, and so “Battle Lines” must offer up one character willing to put in that work with the Ennis and the Nol. Enter Kai Opaka.

In a way, it’s only fitting that the kai is killed on arrival at the Ennis and Nol-Ennis’ moon: a blood sacrifice must be made to buy even the faint hope of either an ending or a new beginning, and her resurrection obviously mirrors elements of Christian mythology, allowing her to rise as the would-be princess of peace. It’s easy to extend the metaphor to a vision of Opaka as the self-sacrificial peacemaker, putting herself in the middle of battles and skirmishes, or to shift to a form of mysticism more focused on the death of the ego as a way to mediate seemingly eternal strife. (In a way, actually, the Ennis and Nol-Ennis’ punishment is a sick twist on reincarnation: rather than moving on to new forms, they’re forced back into the same bodies and the same lives.)

Still, it’s difficult not to see the fate assigned to Opaka in “Battle Lines” as a disappointing use of such a potentially interesting character. In “Emissary,” the kai’s appearance as a figure of mystery showed a deeper concept of Bajor than might have been expected; the intersection of local religions with advanced alien beings (for certain values of “advanced”) is easy to treat dismissively, as an uncharitable account might accuse Star Trek of doing on several occasions, but the relationship between the wormhole aliens from “Emissary” and the Prophets of Bajor was allowed to stand pending further development. Now Kai Opaka, introduced as the religious leader who got the Bajorans through the occupation, is brought back to the show only to be reassigned to a new war-torn culture. Nana Visitor does a good job portraying Kira’s heartbreak at Opaka’s apparent death — one really does get the sense that regardless of the fact that she technically doesn’t die, her plot-driven exile does remove a precious point of stability from a Bajor that possesses too few. At the same time, Opaka feels summoned to be a destabilizing element in the Ennis and Nol-Ennis’ war.

Unfortunately, the plot mechanics that bring Opaka to this pass are somewhat less compelling than they could have been. Deep Space Nine eventually gets better at invoking prophecy, starting with the savvy decision not to do it very often, but in “Battle Lines” Opaka simply shows up on the station talking about “contemplating prophecy,” and later declares that she chooses to stay on the moon before Sisko can even tell her she must stay, because it is “the answer to all the prophecies of my life.” While it may be forgivable as a way to quickly get into the story at hand (though this episode did not need to cut corners while getting into its story, padded as it is with Dax and O’Brien’s technobabble-ridden exposition while figuring out how to rescue Sisko, Bashir, and Kira), as an attempt to add depth to a character’s arbitrary choices it’s cheap and clichéd.

But the true heart of “Battle Lines” lies in one crucial scene between Kira and Opaka. With Opaka in the process of being removed from the Bajoran narrative, Kira begins to take on some spiritual attributes to keep that side of Bajoran life represented in the series. The scene also crystallizes the equivalence being drawn between the Ennis-Nol perpetual war and the Bajorans’ struggle to find themselves in peace. That comes out first in Kira’s refusal to see any such equivalence — Kira always fought to live rather than resign herself to a living death, and had the cause of her people’s freedom to fight for — and then in her growing realization that violence is all she’s known. The Ennis and the Nol represent the heat death of history, a point at which all any of them know is violence reduced to an unchanging gray picture of existence. It is only through acceptance of this violence, and the grievous harm it does to all involved, that it can be transcended. 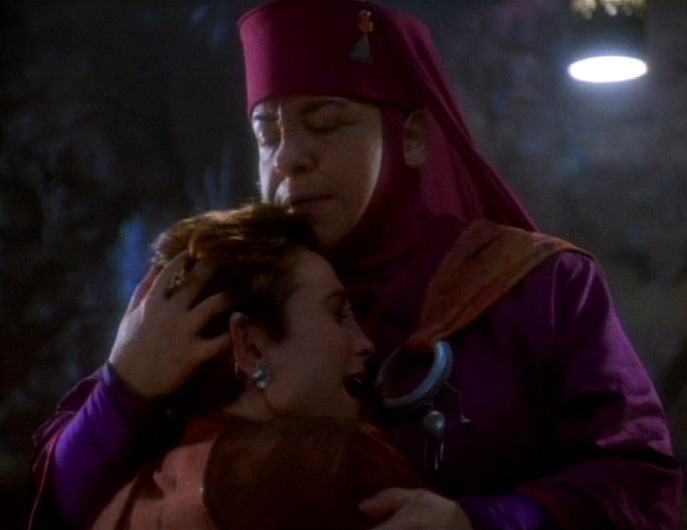 Video Jukebox Song Of The Day #51 – “Sabotage” by Beastie Boys