Dave Hall is a life long wrestling fan from Australia.  Each article he will look at events, cards or wrestlers from the history of WWE, and the impact those events have had in shaping the landscape of the industry today.

In 1984 Vince McMahon, on the back of Hulk Hogan, began his national expansion of the then World Wrestling Federation.  By promoting in regions of the country previously dominated by other promoters and companies and televising his programs nationally, he began to change the way the wrestling industry was viewed.  By 1986 Hulk Hogan, as the WWF Champion, was the most recognized wrestler in the world, regularly selling out the arena’s that he competed in against the top challengers in the company.  Arena’s would often see Hogan compete in title defenses against the same challenger 2 or 3 appearances in a row, with his first title defense either being a loss by DQ or count-out, the next being a tainted win, and the final match being a conclusive victory.  The next challenger would then step up and the same formula would occur.  But in 1986 the WWF used its nationally televised program to launch a feud that had massive repercussions for the industry:  the feud between Hulk Hogan and Paul Orndorff.

The build-up to this feud began in June 1986, and the WWF began to use a tool that they would become famous for: “reinventing history”.  The build began with Orndorff appearing on the flower shop segment hosted by Adorable Adrian Adonis, on Championship Wrestling.  Adonis began to mock and berate Orndorff, claiming that he was Hulk Jr and a shadow of the world champ.  But if one takes the time to review arena results from Orndorff’s face turn in May 1985 until June 1986, they will find that Hogan and Orndorff had rarely teamed together, or even been at the same arena.  Even on Saturday Night’s Main Event they had only been in the same ring once or twice in the space of 14 months.  Yet the way the story was presented from the beginning quickly led to the suspension of belief- the viewers believed that Hogan and Orndorff were close friends who trained together and had each other’s backs.  Over the space of the next 2-3 weeks Adonis continued his verbal attacks on Orndorff, and the two men entered a series of matches at Arena’s around America.  It appeared initially that this was a catalyst for a national loop of Paul Orndorff and Adrian Adonis, but this was not the long-term plan.

The Hogan/Orndorff story continued to be built on television, with the famous Orndorff attempting to call Hogan scene, Hogan appearing with Orndorff to accept the challenge of Bobby Heenan, and then the Tag Team Match between Hogan, Orndorff and the Moondogs where Orndorff refused to tag Hogan into the match.  This type of drawn out storytelling had not really been a major feature on WWF programming to date (at least on the national scale).  TV was used to introduce new wrestlers, start feuds through promo’s and Piper’s Pit segment’s.  However this was unique as this storyline took 6-8 weeks to develop and grow, with something extra added each week.  In the modern world of Raw and Smackdown, and weekly storyline changes being commonplace, it is hard to imagine a time when this was not the norm, but the Hogan and Orndorff build was unique at the time, slowly built to the major climax- Orndorff turning on Hogan during a match with king Kong Bundy and Big John Studd on Championship Wrestling. 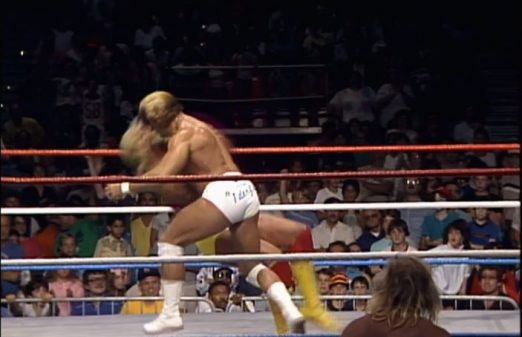 The other unique element to this build at the time was that it was the first time the viewers had really seen the “friend turn on Hogan” angle.  As mentioned before, Hogan usually faced the top challengers or big monsters.  His feud with Roddy Piper in 1984 was built on the back of Piper’s promo skills, but he was already the heel.  On this occasion the WWF fed us a story of Hogan and Orndorff being good friends, even best friends, and then Orndorff being so jealous that he turned on Hogan to get a shot at the WWF Championship.  This was the first time this storyline had been used at a national level.  And did it have an impact.  Hogan and Orndorff began to feud around the country, apparently selling out most of the arena’s they competed in.  According to Hogan in his book, and other wrestlers from that time, this was one of the most financially successful programs that the WWF had run since Hogan entered the company.  Orndorff himself has said that he was making more money than he ever had before, to the extent that Orndorff suffered an injury during the run but refused to stop competing or take time off as they were drawing so much money at the time.  This feud allowed the WWF to take on new challenges, including running “The Big Event” in Toronto, Canada.  This event was held in an outdoor arena and occurred 6 weeks after the televised heel turn of Orndorff.  The place was sold out.

The feud continued through to the end of the year, with the final pay-off occurring on Saturday Night’s Main Event where Hogan and Orndorff met in a steel-cage match, won by Hogan.  The cage match seemed to be the public end to the feud.  While they continued to meet on some house shows, this was essentially the end of the feud. Hogan began to transition into his big WrestleMania 3 match with Andre the Giant, and Orndorff seemed to be left in limbo.  Unfortunately for Orndorff it was his last great run at the top.  He had to take some time off following the feud to allow nerve damage in his arm to heal, and when he returned to the company, he was quickly turned back babyface and began to feud with Rick Rude, while Hogan continued his championship reign for another year.

This feud had been built in a unique way for the time and was so popular and had such an impact that the WWF/WWE, and other companies, have continued to make use of the same elements into today’s product.  All of Hogan’s biggest feuds after this seemed to start in similar circumstances:  Andre turned on Hogan, Randy Savage turned on Hogan, Brutus Beefcake event turned on Hogan in WCW and they main evented Starrcade.   The “friend turns on friend” storyline has become so common that fans can see the storyline coming from a long-way off.  When Chis Jericho and Kevin Owens started their “best friend” angle, just about every viewer of WWE knew that it was a built to a WrestleMania match.  But back in 1986, this fresh approach drew a ton of money.

The use of television to slowly build the elements and storyline of a successful feud are taken for granted in the modern era of wrestling, and most fans can even predict where the storyline will go several weeks before it plays out.  But in 1986 this was not the case.  In 1986 this was fresh and unique, and paid off in a massive way financially for Vince McMahon, Hulk Hogan and Paul Orndorff. The Hogan vs Orndorff story and feud established elements of wrestling story telling that are commonplace today and should be remembered for the impact it had.  In fact, the magazine Pro Wrestling Illustrated even went as far as to say at the time of the feud that the Hogan vs Orndorff feud was the reason they created the “Feud of the year” category in their annual awards.

Unfortunately, this feud also had a lasting impact upon Paul Orndorff, but not in a positive way.  Orndorff never again reached main event level for any company he worker for.  His story played out, and with his injury issues, Orndorff slowly dropped from sight in the WWF, before later appearing in Herb Abrams UWF and then WCW.  The injury he suffered during this feud was never properly tended to at the time, and it continued to plague him through the rest of his career, to the point that during his run in WCW in the 1990’s it was clearly noticeable that one arm was smaller than the other.  But one thing is for sure, the Hulk Hogan vs Paul Orndorff feud changed the way wrestling feuds were presented, and is one feud that I will never forget.