When Teenage Mutant Ninja Turtle fans discovered that Michael Bay would be granted creative direction of the upcoming film that was hailed as the celebration of the quartet’s 25th anniversary, skepticism flooded the internet. When word leaked that Bay would change their origins as pet turtles to having an extraterrestrial background, skepticism escalated to cynicism, particularly because many fans are disgusted at how Bay has handled Transformers, another beloved franchise from the 1980’s. Okay, I was able to stomach the Transformers movies up to the last one, Age of Extinction, which bored me to death, but much of the sentiment concerning the TMNT is rife with that kind of fandom that plagued Marvel’s announcement that Thor is now female. They are hostile to change, citing Fred Wolf’s 1987 cartoon series as the “true” TMNT (note that this will be the only time I will mention him by name).

I myself am a strong advocate of canon and fancy to think new stories that deviate from the originals as playing pretend. When the 1990 TMNT film was released, as a child I was perplexed by Splinter’s rendition of their origin story, because in the cartoon, Splinter is Hamato Yoshi, who is kicked out of the Foot Clan due to Oroko Saki’s treachery (complete with the punchline of the dojo master saying “Throw the bum out”), and would live in the sewer among rats, eventually stumbling upon the Turtles in the mutagen where they would afterward mutate. In the film, Splinter was always was a rat, and his owner was Yoshi who fought Saki in a backstory that, at the time, I merely tolerated for entertainment purposes only. Little did I know that it was actually the 1987 cartoon that most TMNT fans remember that was the cheap imitation. The origin story in the 1990 movie was almost identical to that of the Mirage comic, the true original.

Now before I go further, I have to give recognition to Mark Pellegrini at TMNTentity for not only reviving my interest in the TMNT, but in comics in general. I do not remember how I stumbled upon his blog, but for making sense of the Mirage series, it has been indispensable.  The earliest TMNT comic book I remember reading was Archie Comics’ TMNT Adventures #44 when Armaggon was kicking butt and taking names. I thought that series to be cool because it was so different from the TV show. Little did I know that TMNT Adventures began as a carbon-copy of the 1987 TV series for the first seven issues and would then diverge into its own plots. There were some cool elements to that series, but Archie was the same publisher responsible for pushing out the longest-running series for a video game character, Sonic the Hedgehog, and the stories were not gritty enough to compete with the likes of Violator, Aliens vs Predator, and Mortal Kombat in my young mind–nothing against Ninjara or one-eyed Ralph, both of whom I like. After the abysmal TMNT III movie, and being in college during the 4Kids TV 2003 series (really, I made the mistake of skipping on it like the fans I spoke of above), I wouldn’t begin researching TMNT again until I donated my personal comic collection to MSU and stumbled upon Pellegrini’s blog. Therefore, taking advantage of one of the reasons I came to Michigan State University to get a Ph.D.,the library’s Comic Book Collection, I began devouring Kevin Eastman and Peter Laird’s creations from Volume 1. Lo and behold, I felt as if my life were made of lies. Certainly, my childhood was.

Now what I’m about to do might be considered sacrilege to some; I’m gonna trash the 1987 show. That’s because the reality is that it was kinda garbage, especially outside of Season 1 which had a legitimate original story. It was a series comprised of cheeseball gags and cliche plot devices which boiled down to promotional material such as “enemy of the week” for all of that inexhaustible merchandise that I had my parents buy. It was censored (the turtles hardly ever used their weapons), poorly animated even for late 80’s/early 90’s standards, and Peter Laird loathed the show. 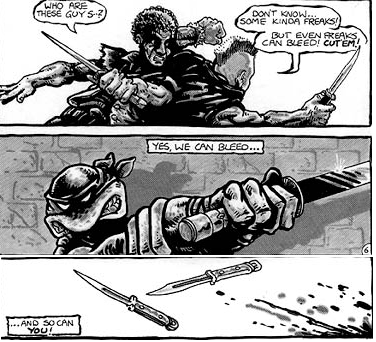 In contrast, the Mirage TMNT was legit and certainly not the TMNT most of us remember. As you can see here, the TMNT’s first encounter with street thugs ends in the latter’s deaths. None of that rope or chain tying and leaving them for the cops nonsense. Nope. The Turtles are ninja, and therefore lethal. This discovery was a complete paradigm shift for me having been force-fed the non-lethal renditions. I mean, this one simple fact has tremendous significance. For the sake of plot for the reader, in Vol 1 #1, Splinter narrates to his sons that which, for some unknown reason, he had never told them all these years — his origin story. He reveals that the sole reason that he trained the TMNT is to avenge Hamato Yoshi’s death, and to kill the Shredder. Raphael is sent to deliver the message, with the pages illustrating the source material from when Ralph is held hostage at the Foot Clan’s hideout in TMNT II, and a big brawl ensues afterward. Yo, revenge isn’t heroic! But alas, they seeming accomplish their mission, ending with Shredder attempting to blow himself up along with the turtles. Shredder dead in the first issue? Nope, he returns for another round, but he seriously does die the second time, as Leonardo beheads the Foot Clan leader to ensure he does not return. Can you imagine arguably the TMNT’s greatest villain being permanently defeated in the first volume? Unlike with the 1987 series, there were plenty of adventures to be had that were just as entertaining as watching the lethal TMNT slice, pierce, and bludgeon badguys into oblivion.

If you have been watching the TMNT 2012, then you know that the title of this post is a rendition of the Krang, who like to speak in redundancies. I assure you that that is a grammatically sound, but totally awkward sentence, but what if I were to tell you that the Krang in the Mirage comics are actually called the Ultroms, a benevolent race of hideous brains that are profusely apologetic about the mutations of the turtles (and the shockingly intelligent and hulking Leatherhead) who eventually would reveal their presence to the world in Volume 4, allowing the turtles to stop hiding. That was a big deal because in the Mirage series, the turtles took their secrecy seriously; it was not like the comics or the movies where they simply wore trench coats sans pants or shoes and nobody asked questions. I could go on, but I’ll save it for another time. Now I’m not saying that the 2014 TMNT movie is going to knock our socks off. I’m just advocating for suspended disbelief, especially if we can withstand the likes of The Next Mutation.