Inside my research laboratory, where I utilize a comprehensive wrestling database I’ve put together to run statistical analysis and conduct experiments, I discovered that prior to the era of YouTube and the WWE Network, there were just not a lot of options available for wrestling fans to see their favorite WWF stars, just sporadic television appearances and Pay-Per-View matches. As an example, from 1987-1990, Hulk Hogan wrestled on television or Pay-Per-View only 32 times. That’s eight times per year! But he worked many more matches of course. In the same span, he wrestled 30 matches that were taped and recorded exclusively for release on VHS tapes, and later, DVD compilations. Promoting untelevised matches at house shows was big business for the WWF in its early days, but they left a lot of money on the table by doing so. At legendary venues such as the Boston Garden, or Madison Square Garden, or small snow-filled markets like Saskatoon, Canada, some of the best or most important clashes in the company’s history took place! Let’s revisit some of these matches, as I countdown from #15 to #1, and explain why these matches were important, as well as re-write some history and explain how the WWE could have used these matches to attract many more fans, and make more money, because that’s best for business! 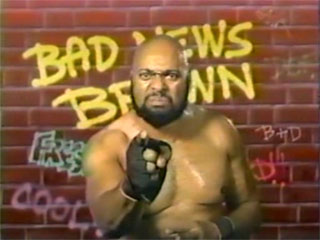 Long before Wade Barrett delivered some bad news to wrestling fans, there was the unpredictable Bad News Brown. Bad News Brown was one of the first reckless wrestlers, which set the stage for many more to come. On any given day his hard style and trash talking could get him cheered or booed. After walking out on his team led by the Honky Tonk Man at Survivor Series 1988, many wondered if Bad News started to see the light. On the Christmas Eve edition of Superstars in 1988, Bad News Brown challenged then WWF Champion Randy Savage to a fight. Savage and Brown came to blows and had to be separated. Brown began to allege that Savage was avoiding him, and using his valet Miss Elizabeth to do favors for WWF President Jack Tunney to keep Savage away from Brown, much to the dismay of the fans and the Champion. Brown continued to antagonize Savage for weeks until they matched up in a Harlem Street Fight in Canada. After a vicious table bump, and a Ghetto Blaster, Brown looked to have had the match and championship won, but the referee had been knocked down earlier. While Brown tries to revive the referee, Savage snuck in with a backslide as a second referee counted three at 6:48 to retain his championship and defend the honor of Miss Elizabeth.

Why This Match Was Important: It was a street fight in an era where those type of violent matches were being phased out in the WWF. Seeing a table bump then was big news and considered hardcore before that terminology was used every day. It was also the last championship match that Savage would have before the Megapowers exploded the next month.

What Should Have Happened: The night before this in the 1989 Royal Rumble match, Hulk Hogan eliminated Randy Savage which started the rift between the Megapowers. At “The Main Event II” two weeks later, Savage attacked Hogan for trying to steal Elizabeth and for overshadowing his career accomplishments. Instead of having Hogan eliminate Savage to promote that, which was a self-sufficient story that didn’t need the Rumble elimination, they should have booked Savage vs Bad News Brown at the Royal Rumble in a Street Fight, and given them longer than seven minutes to tell that story. It could have been a memorable match we still talk about today, as Savage defended the honor of Elizabeth from Brown and retained his title.

After Ricky Steamboat won the Intercontinental Championship at WrestleMania III in one of the greatest matches of all-time, he left the company shortly there after to care for his newborn son, relinquishing the championship. Steamboat found himself at odds with various villains upon his return, including Ted DiBiase and the Honky Tonk Man (who beat him for the Intercontinental Championship), but it was Rick Rude who brought out the best in Steamboat. Without much fanfare, these two men gifted the fans at Madison Square Garden with a 20-minute time limit draw which saw Heenan assure the fans if the match went five minutes more, Rude would have surely won. Steamboat then cleared the house of the dastardly villains. They would meet again at the inaugural Royal Rumble event, where Steamboat would win by disqualification.

Why This Match Is Important: Events held in Madison Square Garden were viewed as spectacles in the late 80s, drawing back to the legendary Bruno Sammartino, Billy Graham, and Bob Backland days. Steamboat was coming off one of the best years of his career and was a big fan favorite, and matched up against a top rising bad guy in Ravishing Rick Rude. They didn’t disappoint, giving the fans at MSG one more magical match for them to remember.

What Should Have Happened: Even though they ended up having a rematch at the 1988 Royal Rumble (which was aired live on USA, not pay-per-view), their second match was lackluster, ending with a bland disqualification finish. The company should have allowed them to put on a 20-minute draw spectacle like they did in New York, and let Bobby Heenan tell the crowd if Rude had five more minutes, he would have surely won. There were a lot more people watching that show than the untelevised MSG show, so, putting over Rude would have been great for him, while making both guys look great instead of cheap and questionable.

“Everybody’s got a price.” Many wrestling fans love that saying, because it applies to the real world. How much money are you willing to take to do bad things? Everybody can be bought, right? Well in 1987, The Million Dollar Man Ted DiBiase tried to do just that, he tried to buy the WWF Championship! DiBiase said he would try to buy the WWF Championship on the November 27th episode of Superstars. The champion refused to sell the title, standing up for what’s right and the fans loved it! DiBiase never got an opportunity to challenge Hogan on television for the title, but on December 11th in Houston, Texas, Hogan defeated DiBiase with a roll-up to defend his championship.

Why This Match Is Important: The storyline which unfolded was far more important than the match itself, but, the fact that DiBiase never got a WWF Championship match against Hogan on any televised event is a crime to itself. There were droves of fans who loved the Million Dollar Man and would have loved to see him clash with Hogan. It was one of the first fractures in Hulkamania as the school yard has become divided and we entered a new era of wrestling.

What Should Have Happened: Why did the WWF introduce Andre the Giant to this storyline? I mean, honestly, he could barely move at this point. Was the best move for business to put the title on him? They were trying to re-capture the magic of WrestleMania III, but everyone knows the sequel is never as good as the original. Instead, The Main Event should have featured DiBiase against Hogan, with the same event unfolding. DiBiase has so much money he can afford to create twins of WWF officials to do his bidding. When the fans realized that Hogan had lost the title to a man who manipulated the outcome, they would have been deflated to say the least. DiBiase was capable of wrestling at a high level here, and putting the title on him instead of Andre would have been a much better move. Even then, the title could have been stripped for the shenanigans, bringing life to the WrestleMania IV tournament, with DiBiase losing to Savage in the finals as a karmic comeuppance. 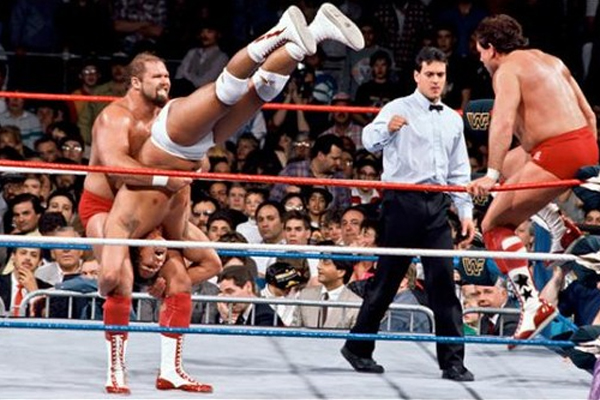 Yes, two of the best untelevised matches happened on the same day, featuring the same tag teams! How is this possible? Well, in the late 1980s, it was not uncommon for the WWF to run multiple venues in different cities in the same day. What was uncommon was that they featured the same wrestlers on the same day. During a matinee show in Madison Square Garden, in New York City, the two teams wrestled for 14 minutes and ended in a disqualification. They then got in a car, and drove four hours to Boston, Massachusetts and in the Boston Garden had another match later that night which went went over 20 minutes, and ended in a disqualification. The Rockers won both matches when Arn Anderson pulled the referee out of the ring during a pinfall.

Why This Match is Important: Outside the norm here, these matches showcased the wear and tear wrestlers go through which go widely unappreciated among fans and critics. Name another athlete, or business person, who has to physically perform in one city in the afternoon, and then repeat that feat in another city four hours away later the same night. It’s truly remarkable. These two teams were the pinnacle of tag team wrestling and they gave their fans in TWO cities their money worth.

What Should Have Happened: Nothing. It would have been hard to attempt to repeat this on television, if not impossible. WrestleMania II was a disaster. I just wanted to showcase this event and give them a round of applause.