In this edition, it’s time to face the heat, and a terrible main event. 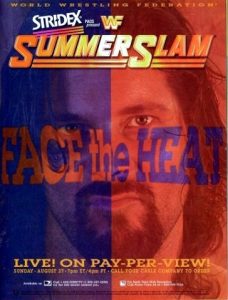 I definitely was not looking forward to this show, as two of the three title matches on this show were absolute garbage. But this is actually a fun show with a few good-to-great matches, a couple of stinkers and everything else kind of hovering around the middle. It’s not the best SummerSlam ever, sure, but I’m not sure it’s the worst either.

What it is, though, is the final pay-per-view event before Eric Bischoff and WCW fired shots over the bow with the new show, Monday Nitro (you ever notice how Monday Nitro sounds a lot like Monday Night Raw? It’s uncanny…). In fact a guy who had a prominent role in the main event of this show would also have a prominent role in the first episode of Nitro, which aired just eight days later, while Raw was still on hiatus from the US Open.

Lex Luger came out to help WWF Champion Diesel in the main event, got clotheslines over the top rope by Diesel (who assumed Luger was going to attack him because Luger’s partner, Davey Boy Smith, attacked him on Raw the previous week), then shrugged it off and attacked Sir Mo. Had Luger not shown up at the Mall of America the next week, getting caught on camera trying to get some food from PastaMania, he likely would have headlined the next In Your House, teaming with Diesel and Shawn Michaels against Mabel, Mo and the Bulldog. That is, of course, just wild speculation on my part. Turning Lex heel the next month would have been a great way to get some stronger main event baddies in the mix going forward. But fighting the Dungeon of Doom in War Games is pretty good, too…

By the way, Luger’s involvement in the main event is really the only interesting part of that match.

Best Match: Shawn Michaels (c) defeated Razor Ramon – Intercontinental Title Ladder Match. This is probably no surprise, as this match is one of the best of 1995, as well. The two men have done this dance before, so Michaels and Ramon had a comfort level with each other that definitely enhanced the match. Unlike most ladder matches these days, these guys once again had a match that just happened to include a ladder. The chemistry is off the charts and the action stays high-paced throughout the contest. And for just the second time in SummerSlam history, the Intercontinental Title does NOT change hands at the show. And both of those times, Shawn Michaels was the champ who retained. Hmmmm…

Worst Match: Bertha Faye defeated Alundra Blayze (c) – WWF Women’ Title Match. I’ll admit, this was a tough call. It was either this match or the main event. Both major title matches were terrible at SummerSlam 1995, but this one gets the nod for being pointless as well. Last year, Blayze went from having one of the best matches on the show – with a great opponent – to this. What a waste.

Memorable Moment: For the majority of my time as a fan, Barry Horowitz had earned the nickname Barry Horrible-witz. The man never won a match, although he was one of the more recognizable enhancement talents. And then, Horowitz faced Bodydonna Skip, getting one of his first televised victories over main talent. The SummerSlam match was the third match between the two, with Skip losing a 10-minute challenge, where Horowitz was tasked with solely surviving without being pinned. The Horowitz push didn’t really last that long, but at least he has a win under his belt at SummerSlam.

Like Pulling Teeth: Looking at the Top Ten, Bret “Hitman” Hart has definitely earned the title of “Mr. The SummerSlam” up to this point (named for his penchant for saying “The” SummerSlam in interviews). His seemingly never-ending battle with Jerry “the King” Lawler, though, produced some of the more mediocre SummerSlam matches of his career, while still providing fans with memorable moments. The 1995 edition, where he was forced to compete against Lawler’s dentist, the result of a “Kiss My Foot” match at the terrible 1995 King of the Ring. The dentist, Isaac Yankem, DDS, was the first of many characters played by Glenn Jacobs. The following year, he would be called to take over as “Fake Diesel” and then, in 1997, he would take on a role he’s had for 19 years – Undertaker’s brother Kane. Many were surprised that Yankem was able to have such a good (or better-than-expected) match with Hart, although it would be less of a surprise as Jacobs’ WWF/E career went on.

One new match in the mix this time around, and it has nothing to do with Bret Hart? The devil you say!