In this edition, we take a trip into Bizarro Land. 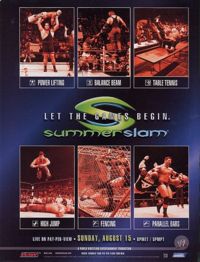 It was a common refrain throughout the night. Hometown boy Edge got booed in favor of Chris Jericho. Fans cheered the always-evil Triple H over the lovable goof Eugene. Toronto earned its reputation as Bizarro Land (which, as a Superman fan, kills me, since the phrase is usually Bizarro World) during this show.

SummerSlam 2004 is another transitional show when you consider where the main event scene will be going in the next year. But the future of the company was on full display here, with a number of future World Champions going at it.

Notably, during Randy Orton’s backstage interview to hype his shot at the World Heavyweight Championship, a certain Doctor of Thugganomics interrupted to promote his match against Booker T. The future of the company was indeed on full display.

Best Match:Randy Orton defeated Chris Benoit ( c) – World Heavyweight Championship match. Orton was a member of Evolution, under the thumb of Triple H. His entire purpose was to weaken champion Chris Benoit for a future match with Triple H. Instead, Orton and Benoit had a great match in the main event of SummerSlam, with Orton hitting an RKO – OUTTA NOWHERE! – to stun the champion long enough for the Legend Killer to earn his first of many World Heavyweight Championship. Benoit walking back into the ring and forcing Orton to shake his hand while yelling “BE A MAN!” would have been an iconic moment had Benoit not killed his family.

Worst Match: Kane defeated Matt Hardy – Til Death Do Us Part Match.The match that launched the start of Matt Hardy’s descent into madness. Fighting to keep another man from taking Lita from him would be a recurring theme for Hardy next year, and back-to-back matches were pretty terrible. This year, it’s not really Matt’s fault, since no one was getting a good match out of 2004 Kane.

Push Gets Shoved: Maybe he wasn’t going to ever be a World Champion, but Eugene was pretty popular. So, of course, he was inserted into a feud with the leader of Evolution. Eugene was, up until this match, undefeated in WWE. But the Triple H buzzsaw put an end to that. Of course, the match isn’t the destruction of the character everyone says it is. At nearly 15 minutes, Eugene got a ton of offense in the match before eating a Pedigree and being pinned by a former (and future) World Heavyweight Champion.

Through The Roof: The whole set-up for JBL’s WWE Title defense against The Undertaker was for the champ to end up getting chokeslammed through the roof of his own limo at the end of the match. We’re still not at the point where Undertaker becomes awesome again, so 17 minutes of a match against JBL is just a bit much for a DQ ending and a cheap stunt. The aftermath, though, has a nice touch where JBL’s chief of staff, Orlando Jordan, won’t let the EMTs take JBL away on a stretcher without his WWE Title.

Perfect Set-Up: One of the most contrived moves in 2000s WWE is Rey Mysterio’s set-up for the 619, finding new and unique ways to “trip” an opponent so they fell into the ropes in perfect position for the move. But in the opening six-man tag team match between Bubba, D-Von and Spike Dudley and Mysterio, Paul London and Billy Kidman, the face team found a solution: Kidman hit a slingshot on Spike so he hit the ropes, which made much more sense than the usual Rey match.

Mania Rematch: Months after he managed to defend his WWE Title against Kurt Angle at WrestleMania XX, Eddie Guerrero and Angle had their rematch at SummerSlam, with a number of callbacks to the Mania match – including Angle making sure Eddie couldn’t take his boot off. This time around, Angle managed to keep Eddie’s lying, cheating and stealing in check and forced a submission.

We are keeping things simple again, no changes

*DISCLAIMER* The Top Ten is for discsion purposes only and is in no way an official or authoritative list. It is simply my opinion.