For this 20th edition, we will take a look at the SummerSlam Top 20! 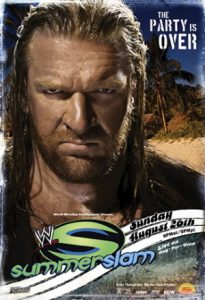 This year’s event featured two former world champions returning from injury, which was the main focus of the opening promo video. The first was Rey Mysterio, who was on his way back from a knee injury and looking for revenge on the guy who put him on the shelf – Chavo Guerrero. Rey’s rematch with Chavo at SummerSlam marked the third straight year that he fought a Guerrero at SummerSlam (2005 against Eddie in the ladder match for custody of Domenick and 2006 against Chavo for reasons). The Chavo rematch this year was a marked improvement over the previous year’s match, but it’s still a match between a bloated Mysterio and Chavo, who is generally mediocre at best.

But the real big return, of course, was Triple H, who missed out on a WrestleMania main event rematch against John Cena because of his torn right quad. Upon his return, the “King of Kings” (seriously, how have religious groups not slammed WWE for that name?) targeted King Booker for destruction. I don’t think the outcome of the match was ever in any doubt – Triple H was going over in his first match back from injury – but at least he covered King Booker immediately after the pedigree this time and didn’t wait a good 30 seconds, like in their WrestleMania XIX match.

Overall, shows like this make it tough to get through this project. Yeah, the main event delivered, but I feel like I had to get through 2-plus hours of crap and mediocrity to get to something good.

Best Match: John Cena (c) defeated Randy Orton – WWE Title Match. Three years before this, we saw Cena interrupt Randy Orton’s backstage interview as he prepared to win his first World Heavyweight Championship. And then, in 2007, we saw the two standard bearers for WWE’s modern era go head-to-head over Cena’s WWE Title. The SummerSlam encounter was well before fans got bored of seeing the two go at it and there was plenty of energy in the arena for the match. Cena and Orton delivered a great WWE Main Event Style match that didn’t really go into finishing move overdrive (although Orton missed the punt, and got out of Cena’s STF before an RKO and an AA…) before Cena pinned Orton for the win. I thought everything about the match worked.

Worst Match: Batista beat The Great Khali (c) by DQ – World Heavyweight Championship Match. What absolute dreck. At WrestleMania 23, just a few months before this, Batista and Undertaker went out to steal the show for the World Heavyweight Title. By the time the company’s second biggest show rolls around, the title is being defended by the Great Khali. Batista wasn’t getting a match out of Khali the way John Cena managed to, and this match was just an absolute chore to watch, even at under 7 minutes. Khali hitting Batista with the belt to end things – which really came so out of nowhere that the announcers seemed legitimately confused about it – just made everyone involved look stupid.

What Were They Thinking?: CM Punk and John Morrison made their SummerSlam debuts here, fighting over the ECW Title that Morrison won in June (replacing Chris Benoit, who was off… well, you know). All these years later, I still don’t understand not immediately putting the ECW Title on Punk, who was clearly a more fully-formed competitor than some of the other newer recruits. And Punk would be ECW Champion before the next pay-per-view, Unforgiven. So why not just put the belt on him here? There were no other title changes on this show, so the decision to keep the strap on Morrison seems strange.

Drink Up: I really enjoyed the Matt Hardy-MVP feud, where they were constantly one-upping each other. Weeks earlier, in a scheduled boxing match on Saturday Night’s Main Event, MVP backed out and put a ringer in – former heavyweight champ Evander Holyfield. So, in the drinking contest the two had here, Hardy backed out and replaced himself with a ringer of his own – “Stone Cold” Steve Austin. Austin doing jumping jacks and push-ups to prepare for the drinking contest got a chuckle out of me and made the whole segment worth it.

More Shenanigans: We are deep into “Who Is Mr. McMahon’s Bastard Son?” territory, and the Chairman was backstage with Coach and William Regal discussing the situation in a number of segments through the night. The punchline, of course, was Mae Young trying to hook up with McMahon to give him ANOTHER bastard son. And, Vince being Vince, he seemed to enjoy Mae’s tongue down his throat. The interactions between McMahon, Regal and Coach were great and saved what should have been a terrible segment.

Speaking of Bad: We are in such desperate times with WWE that I was actually excited when the Intercontinental Title Triple Threat started. Three guys who’ve been gone for a while – the deceased Umaga along with Mr. Kennedy and Carlito – in the same match! It sure wasn’t a classic, but it was definitely something different.

Even more matches to argue over!