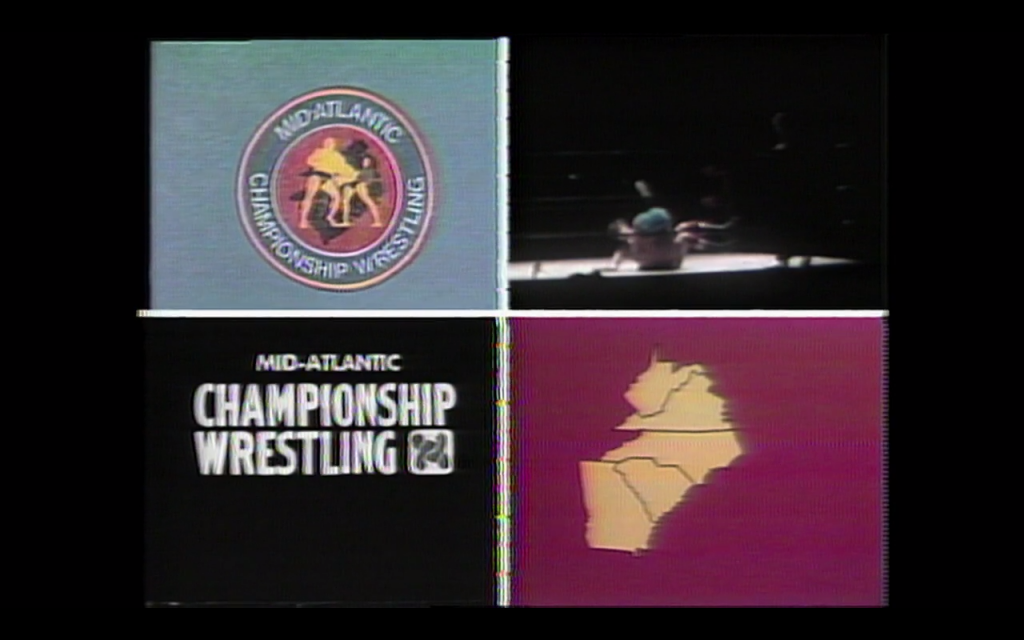 We open with Bob and David in studio to preview the upcoming show. Without fail, David stumbles through informing us that though they were not allowed on last week, Wahoo McDaniel, Roddy Piper, and Abdullah the Butcher will appear because the fans have demanded it, and here on Mid-Atlantic Championship Wrestling, you get the best.

Ron Bass is again waiting off screen for a quick interview to start the program and rather than focus on one person, Bass chooses to call out a list of heels because he’s tired of what’s been going on around these parts and will help anyone in peril. He offhandedly mentions a feud between Ole Anderson and some dude named Ric Flair.

Art Donovan would be satisfied to know that in his introduction, Bob gives the precise height and weight of every participant in the next match.

Ricky Harris and Mike Miller vs Jay Youngblood and Ricky Steamboat
Harris gets a little bit of offense in on Steamboat, but never really enough to put him in any sort of peril. Steamboat and Youngblood do a lot of quick tags and work in some hard chops before Steamboat finishes with a diving crossbody.

Match Notes
Harris looked pretty solid if for nothing else than the sheer amount of punishment he takes (which Bob and David mention on commentary). The match was mainly a showcase for the fast and furious teamwork of Steamboat and Youngblood and not much else. It appears that the team with Jake last week was more of a one-off because this feels more like a coherent team.

Presentation Aside
We jump straight to the next match, and I’m just starting to realize that there are no real entrances. (Not that there’s anything wrong with that!) The guys just come through the curtain and walked into the ring, if they aren’t already in there from the start. Not that I’m expecting pyro or anything, but there isn’t even a ring announcer to introduce guys. It sort of jars my brain. I’m use to theme songs, signature poses, and all of that theatrical lagniappe.

Ritchie manages to take Slaughter off his feet with a school boy. Unfortunately, poor Ron doesn’t get another second of offense. Slaughter toys with him a lot throughout the match, even throwing a dropkick, before finishing with a knee to the gut. A little disappointing compared to his performance last week, as it lacked the same relentless aggression. Still, it did help to push him as a big mean bastard in the way he tried to humiliate his opponent instead of just end it quickly.

Match Notes
This was a bit slower than Slaughter’s last outing, with a good portion of the match spent either sneering at Ritchie or sitting in an armbar. At one point, he shouts something incoherent about Ric Flair into the camera. His entire character seems to be centered around his love of abusing guys, which works wonderfully when you are this good at beating the hell out of people.

Jake Roberts vs Jim Nelson
The match starts with a heavy dose of grappling as both guys exchange holds, including an STF by Jake, until Piper and Ole Anderson show up at ringside, changing the entire dynamic. Now Jake must be weary of their presence (if he doesn’t want to get forked like poor Wahoo), while Nelson now has extra fire after a pep talk from Ole.

Jake makes a big mistake trying to hit Ole on the apron and gets beat in the corner as a result. Jake is able to survive long enough to eventually outsmart Nelson and slide into the DDT, which is treated as a huge deal on commentary. He still defeats an inferior opponent who was able to gain momentum through nefarious means. Great storytelling considering it seemed like a pretty standard affair at the start.

Match Notes
This is the first time I’ve heard some playful banter out of Bob and David, as they joke that Nelson would be a perfect fit for the Marines. I love Jake Roberts, but the Jake Roberts I know is rarely described as “wiry” or “lean” as he is here.

Piper and Ole bring so much drama by merely walking down to ringside. You know they are up to something fiendish, and the commentary does a great job of reminding the audience of what they are capable of. It changes the story of the match from athletic mat work to a tense scrum where Jake knows he has to deal with two guys outside. His excellent selling makes you feel he might be screwed until he finds a weakness and masterfully wiggles into position for the DDT.  The finishing sequence is executed masterfully.

Post match, Ole and Piper stick around and glare at Jake like they are ready to jump Jake. Jake nearly strikes Ole on the apron, but he escapes right as Ron Bass shows up to support Jake and make the heels scurry away. Sort of ironic that Bass is called the “Outlaw” when he acts more like a sheriff than a criminal. He actually seems to love justice and order.

After a break, Piper and Ole are in studio for an interview where Bob actually calls Ole out for not getting in the ring to fight and even hits him with the “blah blah” hand gesture thing (very sassy Bob!). Ole contests that if he would, he surely would have faced fines or suspension, and Jake and Bass couldn’t handle them anyway. He also throws in a remark about Ric Flair running around with a baseball bat. Sounds great!

Piper is so great at little subtle heel tendencies. Rather than stand, he’s sitting nonchalantly on a desk like John Bender, waiting for his turn to talk. He spews out a wild rant about how what they did to Wahoo was so vicious, they had to edit the tape. Wahoo said they could take his title over his dead body, so, naturally, that’s what they tried to do. (Apparently Wahoo is United States Champion, though it hasn’t been mentioned up to this point.)

If the main goal of Mid-Atlantic television was to get people to the arenas, these two are doing a damn fine job so far.They are the perfect heel formula–simultaneously dangerous and cowardly. I would surely be scrapping up some cash to get into the Greensboro Coliseum to see some babyface savior go after that blowhard coward Ole and his maniac buddy with the bagpipes.

Sgt. Slaughter pops in and makes a confident, if vague, promise that he will win a major title soon. I guess he just isn’t sure which one yet. He and Bob’s interactions are quickly becoming a highlight of the show. Slaughter keeps calling him “Jack” and berates him for trying to end the interview early, which Bob, in perfect form, no sells. 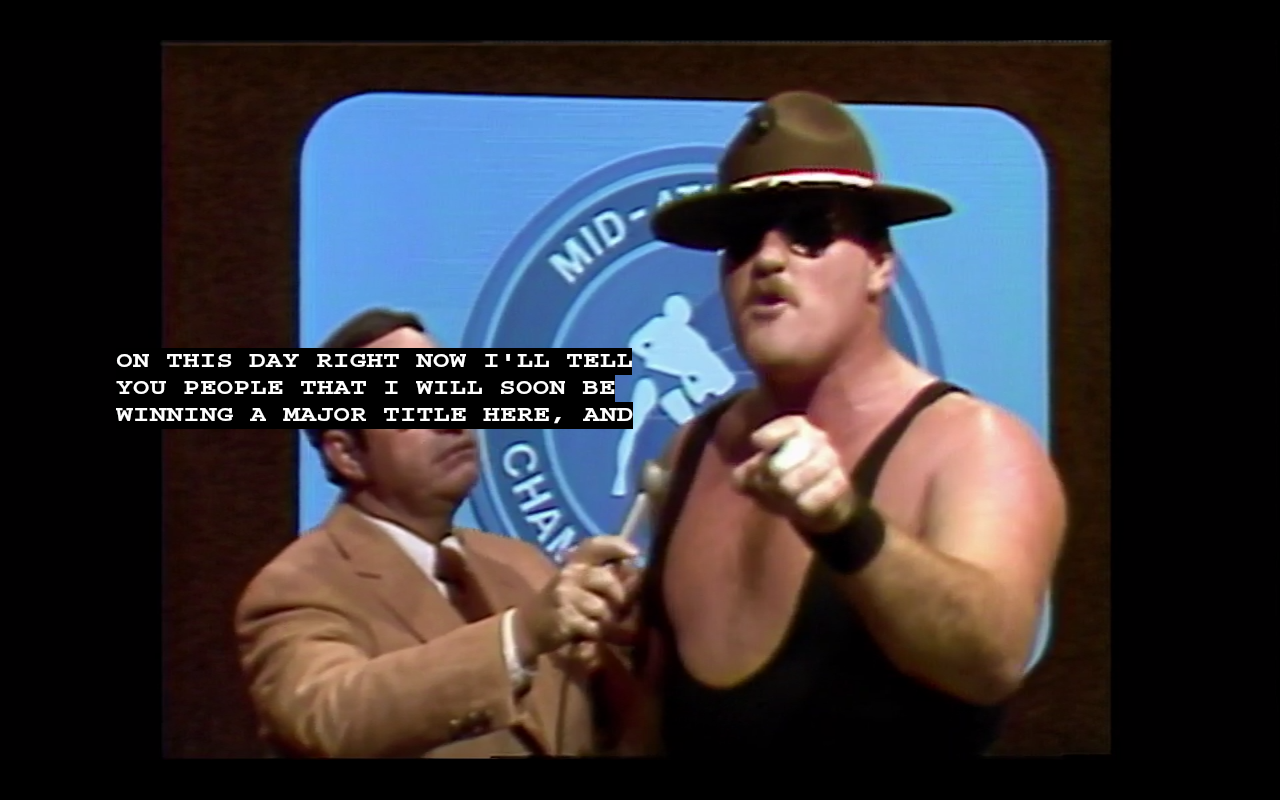 Charlie Fulton vs Mid-Atlantic Television Champion “Outlaw” Ron Bass
Interesting rule, as the title is only on the line for the first 15 minutes. In theory, Bass could just stall and run around, but I know he would never do that because Rob Bass loves justice, competition, and probably the Dallas Cowboys. Unfortunately, he also loves poorly executed submission holds, which account for much of the match. This one just meandered and really went nowhere until Bass hits a powerslam for the win.

Match Notes
David still repeats what Bob says or speaks in vague cliches: “They can wrestle. They can fight. They can do things.” It takes Bass three tries to lock in some weak looking submission where he twists Fulton’s arm around his foot, then just kind of falls. Someone in the crowd very loudly and obviously laughs at his ineptitude. Unlike someone like Jake, Bass just doesn’t make the holds look believable. He looks like he is just laying there instead of moving for momentum and position.

This doesn’t compare well to many of the previous matches, which is disappointing because Bass has done a fine job of building his character as a tough respectable face. But then he gets in the ring and really looks weak. I was hoping for some nice smooth power offense.

Presentation Aside
At times there are these awkward dead moments where Bob is introducing a match, and the competitors are just wandering around in their respective corners. The crowd is so small that instead of the din of crowd noise during matches, you just hear individual people yelling. In the last match, one lady just keeps screaming “C’mon Ron!” like he’s her nine year old son in a little league game.

Before the match can begin, Piper insists on playing his bagpipes, and honestly, I don’t really know how to tell the difference between good and bad bagpiping. They work in noticeably more brawling in this one, mainly due to Piper. There’s a lot of quick back and forth action until the heels trap Jones in the corner. Jones eventually makes the tag, but Piper and Ole grow tired of the comebacks, so they knock Monte out and start double teaming and choking Jones with the tag rope until the ref has enough and calls for the disqualification. Some good fast paced action that built Piper and Ole’s ruthless, cheating characters.

Match Notes
Piper looks very Billy Jack Haynes-esque with his yellow and green checkered trunks. Monte looked pretty solid and is probably the most jacked dude featured so far. I really enjoy the style of these tags. Everyone is constantly tagging, which makes perfect sense because that is actually what you would do if you wanted to stay fresh in a tag match. It can be a little tricky keeping track of the jobber guys in tag matches because they all just wear plain color trunks, often of the same color. We need some distinguishing characteristics here. How about some monk outfits or garbage men, pal?

Steamboat and Bass come in to make the save and then meet up with Bob for an interview. The Outlaw is pissed and says he is going to get a license to fight these guys anywhere in the building–dressing room, parking lot–doesn’t matter.  Steamboat says they better read the fine print because whether it’s them, Wahoo, or Flair, they are going to get them. (Apparently contracts are very strict and specific in the Mid-Atlantic region.) They are going to give them a little dose-wait-A BIG DOSE–of their medicine. Good fiery promo from both guys, with Steamboat being especially animated.

MVP: Roddy Piper
Between his crazed promo, fun brawling, and overall knack for always doing a little bit extra (ex. impromptu bagpipes) to add tension and life to the show, Piper stands out.

If You Only Watch One Match: Jake Roberts vs Jim Nelson

Overall Impression:
A bit of a step down from last week due to lack of a big angle and one crappy match, but still a pretty strong show that continues to build the characters, while throwing in a couple of solid matches. I want more and more for Ole and Piper to get what’s coming to them, though I do find myself wishing that Jake could swap with Bass because he can do everything Bass does, only much, much better. Also, I’m still anticipating the first appearance of THE NATURE BOY. The show continues to keep a great pace and has yet to feel like a chore, which, given that it’s mainly squash matches, is an accomplishment.