*** I was born in 1990 and became a wrestling fan in 1996. Shawn Michaels was my first favorite wrestler, and I watched every minute of the Attitude Era religiously. Needless to say, 90s WWF is my wrestling foundation. I have heard about the mythic era of the NWA and the territories, (and of course I’ve seen bits and pieces) but never truly steeped myself in all its glory. Follow my fresh/ignorant breakdown of classic wrestling! ***

The beautiful luxury vehicle you see above will play heavily into this episode, but we’ll get to that soon enough.

To start the show, we get the first glimpse (at least for my purposes of this writing) of the on-screen figurehead of the promotion, Sandy Scott, who looks like Davy Crockett and Bob Caudle fused into one body. As you’d expect, they play this very straight as if this were a true professional sports organization. Scott’s a droll character, which makes a lot of sense because athletic organizational figures are usually pretty boring and droll, and he explains that athletes want big money, so he’s doing his best to get the very best athletes.

Ricky Harris vs Jay Youngblood
Youngblood’s strategy in this match centered solely on slapping on headlocks, presumably to keep the big man down. Every time Harris gained some momentum, he was cut off with headlock, until Youngblood decided to put him out of misery with some chops and, finally, a flying chop.

I have enjoyed Youngblood throughout these shows, but man, this match was a chore. He had Harris in a headlock – and this is not an exaggeration – for at least 80% of the match. And not even interesting, captivating headlocks. These were lay-on-the-mat-to-a-silent-crowd headlocks. I guess it’s just a product of the way these shows are put together in this era that you will get some junk from time to time, even from solid wrestlers. Also, if his promos are any indication, Jay may have been in altered state.

Sgt. Slaughter, accompanied by Pvt. Nelson, comes out for a promo. Slaughter mentions “the big fat Indian,” who is known more commonly and less racist-ly as Wahoo Mcdaniel. After a clip of Wahoo, Slaughter whips out a contract for he and Wahoo to fight anytime and any place. For as intense and energetic as his promos are, Sarge never stumbles on his words. As long as there’s no spelling involved, he’s gravy.

United States Heavyweight Champion Sgt. Slaughter vs Ken Hall
Not a whole lot to recap in this one. Sarge kneed Hall in the gut a few times, then slapped on the clutch. Hall got one punch in that was not sold one bit.

In a nice touch, Slaughter screams for Wahoo the entire time he is toying with Hall. That said, I usually enjoy this Slaughter squashes, but this one felt particularly dull. His offense didn’t look as devastating, unless I’m just becoming immune.

Announcing Aside
I’ve started to realize that Davy Crockett works much better during matches than in interviews and studio segments. Bob’s stoic demeanor needs to be supplemented with some more pronounced emotion, and David and his yelping do that job. Maybe I’ve been too hard on poor Davy. His cheesiness kind of grows on you, like Vince on commentary.

Next we get a promo for a local show in Roanoke, Virginia, a wonderful small mountain city that I’ve actually visited. The highlight here is a long rambling promo from the Russian Bear/Cookie Monster Ivan Koloff, who will be putting up his (TV?) title against Jimmy Valiant, who will be putting up his Cadillac. Hopefully Koloff wins so we can have some vignettes of him cruising around in Jimmy’s Cadillac car.

Bob has Sandy Scott again for the next segment. After some prompting from Bob, Sandy leads us into his own question about attracting great athletes to Mid-Atlantic, but he completely botches the wording of his question.  See Sandy has been thinking of something, and he’s come up with something–an incentive if you will. So he asks: “What would anybody would like today?” And Bob gives a genius response. 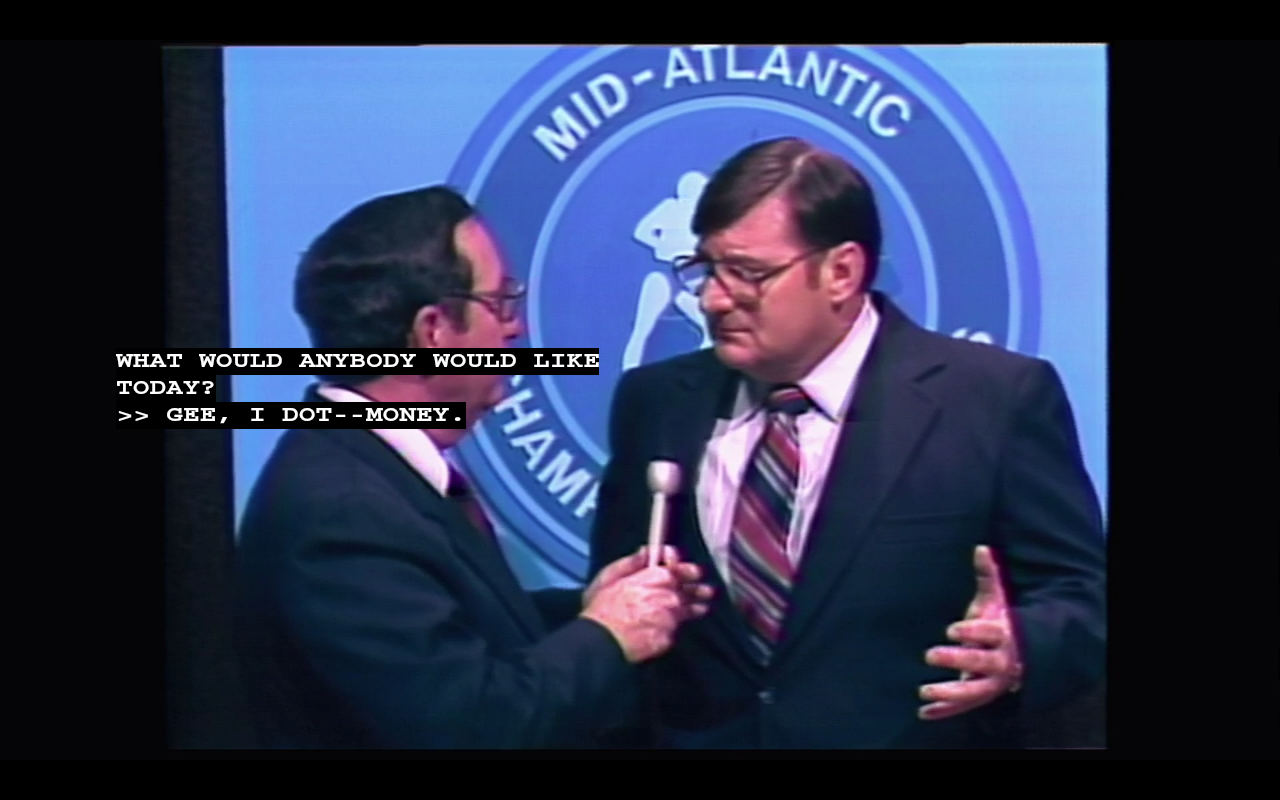 And Bob’s right because Sandy reveals his plans to stage a tournament for a brand new 1982 Cadillac, worth $20,000! Nothing brings me more joy than the melding of territorial wrestling and The Price is RIght. They should call the tournament the “Showcase Showdown”. To top it off, I assume Valiant won the Cadillac that Koloff was grumbling about earlier. The timeline of these shows can be confusing to say the least. As we see, the whole show keeps building up the tournament, yet we already know the winner.

Next, to illustrate the top talent Sandy has for Mid-Atlantic, we cut to some taped footage of Tommy Rich in a match against a portly man with a mustache named Tony Russo, who may have been the inspiration for Wario. Rich certainly has the look – tall and blonde in the mold of Flair, Barry Windham, etc. that seemed to be prevalent in 80s wrestling – despite the match not being the greatest.

Announcing Aside
During the Tommy Rich footage, Bob and Sandy provide voiceover commentary in studio, and let’s hope that Sandy keeps his day job in management because he struggled mightily here. Despite Rich being the showcase, they spend the majority of the match putting over how excited the talent will be to wrestle for a Cadillac. At one point, he refers to Rich as a “fan lover.” Too bad I don’t have a gross wrestling story about Tommy Rich. 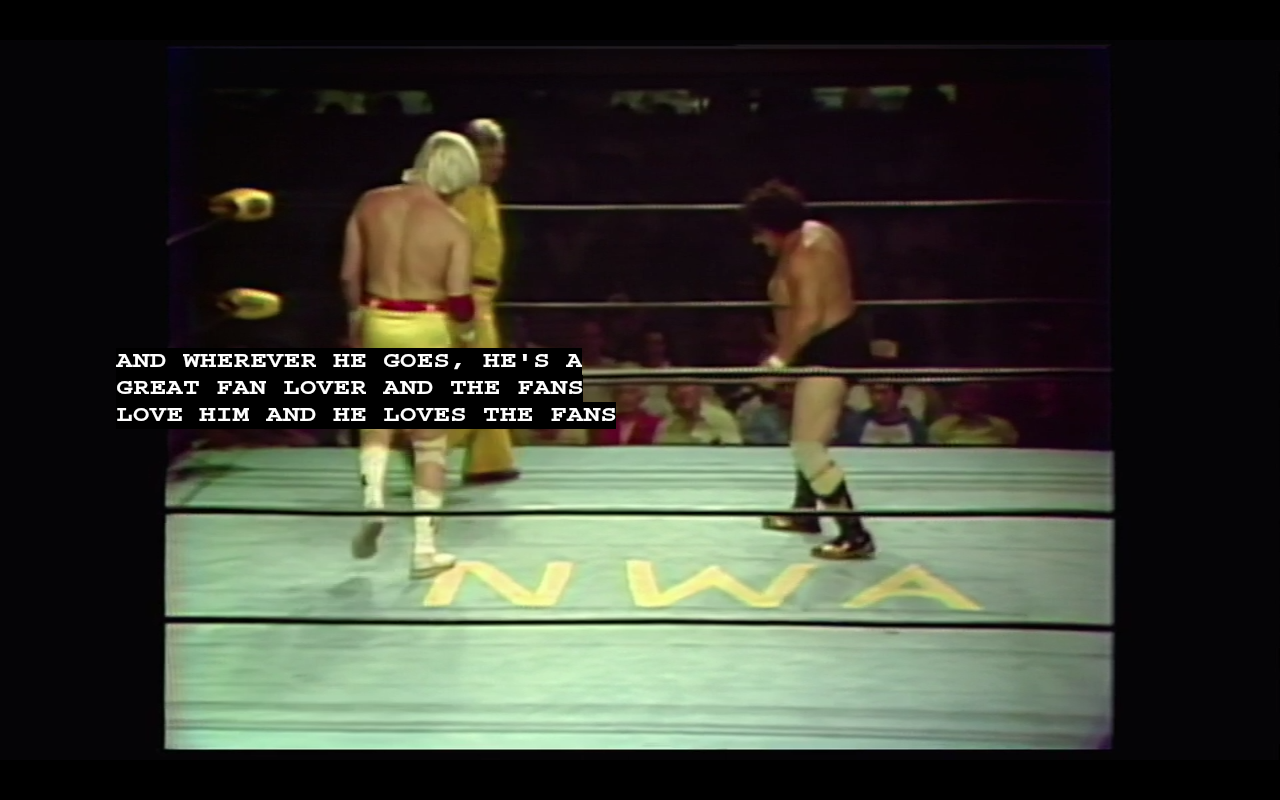 And the Cadillac craziness continues! The heel trio of Piper, Slaughter, and Ole come out to further put over the presumed Caddy tournament/battle royale/whatever. Piper highlights the entire segment with his always wonderful ranting, including that he would “sell his grandma to the Huns” for 17 grand. Sandy says they better watch out for “King Kong” Anthony Mosca. And to one-up his performance earlier, Sandy calls Piper, “Rodney” Piper. Maybe this was common at the time, but I’m not giving Sandy the benefit of the doubt. Plus, Bob laughs at him for it.

In a quick promo segment, Jay Youngblood has be reminded of what comes after Sargent in Slaughter’s name, Steamboat mentions that petitions are coming in for him to fight Piper, and Jake seconds Steamboat while wearing a plastic snake on his hat, the first reference to he and snakes I’ve seen here. I love the use of social activism as an effective means of setting up a match. 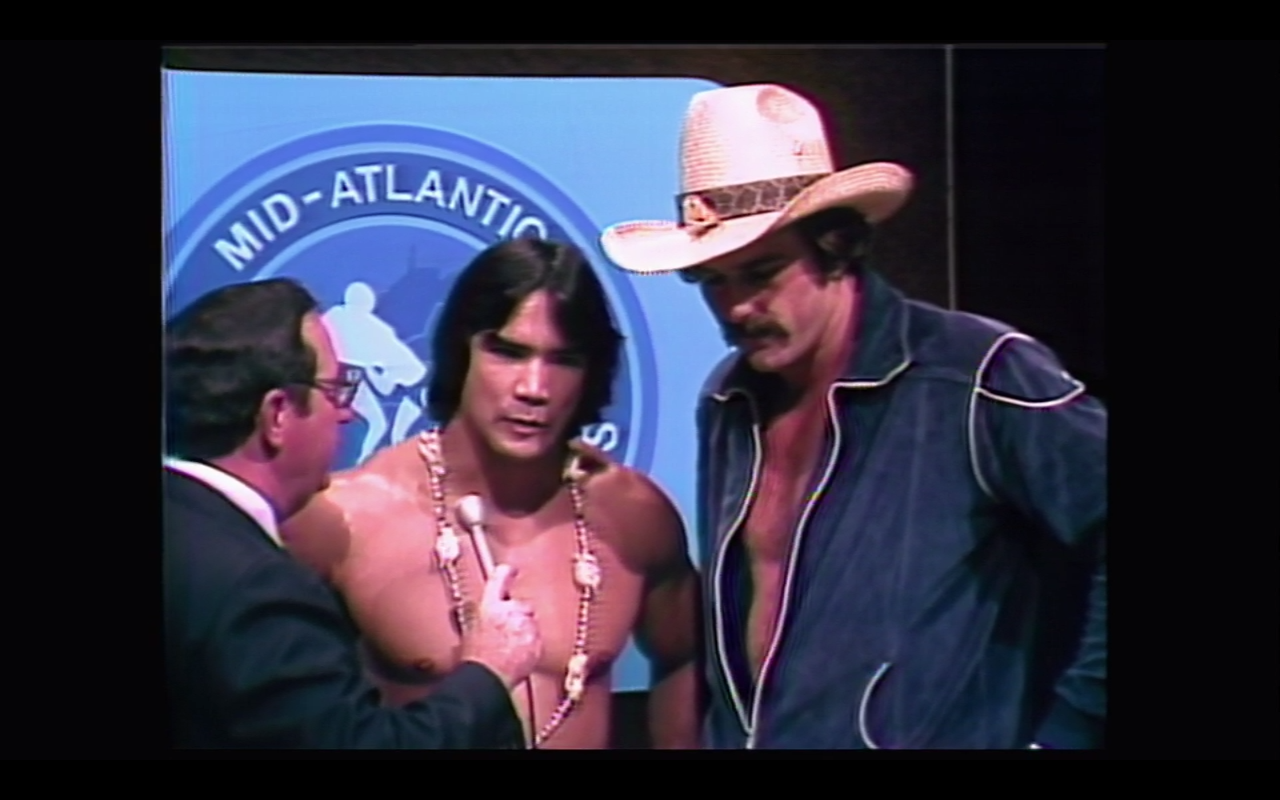 Next up, The Boy from New York City, Jimmy Valiant, squashes Deke Rivers to some jangly piano. I don’t this as a match, as it felt more like a weird bumper segment than an actual match.

Piper comes out to refute Steamboat’s request for a title shot, and rambles away as we see some footage of Steamboat fighting a man in a blue mask. See, Steamboat was suppose to beat him to earn a shot, but the ref got bumped, Piper interfered, and then, in a wonderful piece of heeling, got his masked buddy to count him the winner in a match he was never in.

**Catch some Mid-Atlantic action at the Roanoke Civic Center, featuring THE WINNER OF THE CADILLAC Jimmy Valiant against Ivan Koloff and a super young Barry Windham against Ric Flair. Again, all this hype for the Cadillac and the winner is basically spoiled.**

Jake Roberts and Ricky Steamboat vs Super Destroyer and The Grappler
Jake and Steamboat come out quick trying to hobble Super Destroyer. Neither team can really gain an advantage due to the quick tags, until Grappler and Destroyer start working Jake over. Piper and Ole come down looking for trouble, but Jake hits a DDT which allows him time for a hot tag. Before the Steamboat can grab a pin, Piper yanks him for the disqualification.

This was on its way to being an excellent tag match before Piper cut the third act short with his interference. Jake and Steamboat are such an effective face team because they can both sell for sympathy and also come out on fire for a comeback. I love Jake’s knee lifts. In other news, Bob and Davy continued to gush over the Cadillac during the match.

To end the show, Steamboat shows his own version of the tape which shows that he actually did beat the masked man for the title shot. He calls Piper “Casper the White Ghost.” Again,Steamboat spitting fire with the insults, continuing the conflict with he and champ, Rodney Piper. And that’ll do it for this week!

End of Show Notes
MVP: Sandy Scott
An unorthodox pick, but this was an unorthodox episode with not much real wrestling. He brought the Cadilliac to the show, and his goofy segments are easily the most memorable parts of this show.

If You Only Watch One Match: Jake Roberts and Ricky Steamboat vs Super Destroyer and The Grappler

Overall Impression: Again, this was an odd episode with not many true matches in favor of odd studio segments and pseudo-matches. I still rate this one above average just for the novelty (at least for me) of a wrestling show being so fixated on giving away a car as a motivator. Certainly not something I’ve seen much, so it gets a small bump for originality.
Rating: 6/10