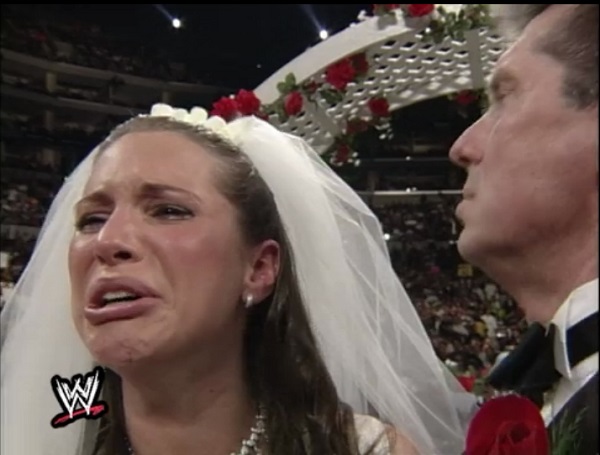 OH MY GOD the Wedding Episode.  This one blew my mind when I first saw it in 99, because they had been building to the wedding for so long and you knew something wacky was going to happen, but the “Wrestling Wedding” was not yet enough of a trope that you could predict the beats of what exactly would go down.  I don’t think anyone in their right mind would have predicted how huge this ended up being for THIS BUSINESS, and that this angle would end up completely altering the dynamic of the entire company years later, but here we are today.

So I suppose you could POSSIBLY book a worse tag match by putting Mideon in there somewhere, but they’re sure giving it the old college try here.  Kane quickly hits a flying clothesline on Viscera while Bossman beats on Show outside with the nightstick, but X-Pac runs in behind the ref’s back and hits an X-Factor on Kane.  Vis gets the pin at 1:30 off that.  X-Pac beats up Tori afterwards as well, because he’s all about the class.  DUD

Meanwhile, we take a look back at the Test-Stephanie romance.  Hearing that Stephanie was suffering from amnesia due to “post concussion syndrome” makes me wonder if Dolph Ziggler originally went around introducing himself to everyone because he couldn’t remember meeting them?

D-Generation X is out to warn Vince McMahon that he can’t come within 50 feet of any of the DX guys, lest legal troubles result.  Also, he’s got some bad news:  No wedding tonight.  This brings Vince out, who would bulldoze their limo with his rent-a-car all over again to protect his family.   And HHH’s blood is gonna be on his hands at the PPV.  So tonight, it’s Test v. HHH and the other DX members against The Rock N Sock Connection and a mystery partner.

Man, this one sure took on greater significance years later.  Matt gets a tornado DDT and yodeling legdrop for two, but Edge comes back with a german suplex for two.   They head up and Matt gets a superplex for two, but he goes up again and Edge dropkicks him into the railings for a sick bump.  Back in, Matt and Edge both hit Jeff and Christian with dives and it’s breaking loose in Tulsa!  Edge spears Matt for the pin at 3:10 while the camera is replaying the other highspot.  Total stunt show.  *

Meanwhile, Steph has her bachelorette party with Moolah and the ladies.

Chyna is out to challenge Chris Jericho to an IC title match TONIGHT, but Jericho is suffering from post-concussion syndrome, much like Stephanie, due to a brutal beating delivered by Chyna on Smackdown.  Miss Kitty sprays him with a fire extinguisher to bring the LOLZ.

Godfather gets a legdrop for two, but Blackman puts him down with a kick for the pin at 1:00.  This might seem quick, but only if you haven’t read Hardcore Holly’s book and thus don’t understand how fucking badass dangerous that Blackman really is.  DUD

Meanwhile, the Dudley Boyz play cards with the APA.  It doesn’t go well.

Meanwhile, Al Snow makes his pitch to be Mankind’s partner tonight, but Mick feels like Rock still hates Snow’s guts.  Well, to be fair, really no one likes Al Snow.

Too Cool v. The Hollys

Too Cool double-teams Crash and Scotty hits the Worm (opposite the hard camera) and they finish with the Midnight Express’s Veg-O-Matic at 1:00.  DUD  Well that was brisk.

Meanwhile, it’s time for the stripper at the party.

The referee is wearing a Vince mask to build suspense.  Test pounds away in the corner and gets a powerslam for two, but HHH USES THE KNEE to take over and drops a knee.  They slug it out and HHH gets the Main Event Sleeper, but “Vince” slaps him around to wake him up.  HHH DDTs him and goes low, however, and stomps away in the corner, but Test makes the thrilling comeback.  Powerbomb and backdrop suplex set up the flying elbow, but HHH bails to escape it.  They fight on the floor and HHH brings a chair into the ring, but “Vince” keeps that from happening.  HHH uses the knee again, but the mystery ref won’t count.  This prompts HHH to finally attack him, but Shane runs out and lays him out with the chair, allowing Test to finish with the flying elbow at 8:13.  We don’t know who the mystery ref was, but as JR notes, it can’t legally have been Vince.  Not exactly a great showcase of Test, but then HHH basically took all the offense anyway.  *

Meanwhile, the stripper gives Stephanie one last shot of something REALLY strong.

Barbara “BB” Bush is out to challenge Ivory to an evening gown match, because she’s so MAD, despite her face being frozen in a state of perpetual boredom.  Ivory comes out and they rip each others’ shirts off in the least sexy way possible while BB maintains her plastic facial expression.

Val misses a blind charge and Angle clotheslines him down and then to the floor, where they have a brief brawl.  Back in, Angle gets a sleeper, but Val turns it into a powerbomb for two.  Russian legsweep gets two.  Spinebuster and he goes up to finish, but the Bulldog runs out and crotches him, allowing Angle to get a superplex for two.  Val keeps fighting, but Bulldog hits him with a chair and the Angle Slam finishes at 3:20.  Man, that Val-bulldog feud was quite the barnburner.  ½*

Meanwhile, Al Snow really hates the Rock, but is that the Rock standing behind him?  Yeah, it is.  So Rock does a funny monologue pretending to not see Snow standing there while Snow makes faces at him.  Mick’s bemused acceptance of the whole thing is great, as he’s just like “Well, sounds like you’re out, but we’re still on for Disneyland tomorrow, right?”

Mick chases Road Dogg to the floor, but walks into an X-Pac spinkick and gets beat on back in the ring.  Gunn prevents a tag to the Rock and X-Pac throws kicks for two.  Gunn with a corner splash to set up the Broncobuster, but Mick counters with the Mandible Sock.  Hot tag Rock, and it’s Rock Bottom for Billy, but Al Snow runs in and gets the babyfaces disqualified at 4:30.  No wonder Rock hates him.  *1/2  Rock kicks his ass and gives the People’s Elbow for his troubles.

Meanwhile, the APA and Dudleyz might be enemies at poker, but at least they all agree that The Public Enemy sucks.  OUCH.  Sadly, their peaceful co-existence comes to an end when Bubba shows six aces and triggers a brawl.  Oh man, if he had thrown down ACES AND EIGHTS I would have literally shit my pants.

And with all that pesky wrestling out of the way, time for the REAL main event!

Test & Stephanie McMahon are out for their long-awaited wedding, complete with bizarre “worlds colliding” craziness with Steph’s real-life friends as bridesmaids and Test having the Hardy Boyz and Edge & Christian as his guys.  And the great thing is that they play it all so straight, with the inspirational soul singers and loving families, and then the priest is like “If anyone has reason to object…” and of course, all hell breaks loose in the most awesome way.  It’s all the more awesome because the last major wrestling wedding up to then was Liz & Savage, which was played totally straight, so there was no expectation from the fans that there would be the craziest twist ever.  And what a twist!  Because that shot Stephanie did at the party actually put her out cold, allowing HHH to kidnap her and take her to a Vegas drive-through chapel.  HHH is really in his glory here (“40 bucks?  That’s kind of steep.  And we’re kind of in a hurry here.”)  And this, finally, makes HHH into the biggest heel and star in the business with one line, and this is it:  “I know you can only have one question on your mind…DAD…and that is how many times did we consummate the marriage?”  And since there’s absolutely nowhere to go from there but down, the show ends on that cliffhanger.  No question, one of the greatest angles in the history of wrestling.  If only Test didn’t suck so badly that he couldn’t keep up his end of it.

Vince Russo wishes he could have come up with that one.  The rest of the show was still the weird growing pains where they were slowly trying to get crowds re-accustomed to actual wrestling again, but my god that closing angle was something special.