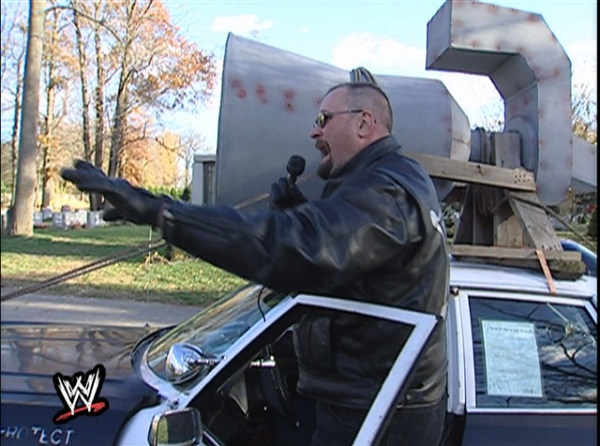 So Vince Russo is a few months removed from the product, and this is the go-home show for Survivor Series 99, a fucking terrible show with a gigantic bait-and-switch main event.

Evil DX is out to start, as the Outlaws have resolved their differences and regained the tag titles for the last time (until 2014!).  We go back to RAW, with D-X basically cheesing Vince off with their hilarious “raping Stephanie” prank, but HHH reveals that they just hired an actress to portray the part of Steph.  So don’t worry, they just pretended to rape some skank.  Billy insinuates that the size of his dick “punctured her lung”.  This stuff was on prime time TV?  HHH promises to go through Rock and Austin (who, by the way, was known to be severely injured for a least a month before this) and retain the title, and then go through Vince next.  This brings out Vince to announce that tonight, in this very ring, it’s D-X v. Kane, Shane, Test & Rock in an elimination match, with Steve Austin as “guest enforcer”.   HHH notes that Test is bad in the sack, so he charges out and gets beat up.

Edge tries a rana and gets dropped on the top rope, and Bob chokes him out on the ropes.  Suplex and Holly goes up and lands on Edge’s boot, and Edge makes the comeback.  Fisherman’s suplex gets two.  Tornado DDT gets two.  Holly catches him with the DROPKICK OF DOOM and goes up, but Edge crotches him and brings him down with a superplex.  Holly does the Dynamite Kid reversal and gets the pin at 3:30, however.  Still a short match, but you can immediately tell how much more calm and easier-paced the show is.  *1/2

Meanwhile, Big Show preps for his father’s funeral.  Hopefully nothing hilarious happens to ruin it!

Very early in the Dudley run, obviously, as they were still wearing the dated tie-dye ECW look after jumping ship.  D-Lo gets worked over quickly and they do the future Wazzup , but Bubba misses the senton.  He gets a big boot for two as the crowd is just ice cold for the Dudleyz, which is kind of weird given how red hot they became leading up to winning the tag titles in 2000.  D-Lo with a powerbomb and it’s hot tag Godfather, as tries the Ho Train and gets cut off by Bubba.  The assorted Hos distract the ref, and the 3D finishes D-Lo at 3:53.  You could see that move starting to get over, and once they changed their look it was time for the next level.  ½*

Meanwhile, D-X are no fans of Arnold, and will be telling him so.

Val’s promo before the match rages against Al Snow for treating women like objects, when in fact Val’s gimmick is treating women like objects.  So Bulldog is a babyface here?  He’s got the Mean Street Posse as backup, but I never know with this time period.  Or maybe Snow was the heel at this period?  That sounds more correct, actually.  Anyway, while I muse about this, a big schmoz breaks out between the Survivor Series teams for the DQ at 1:00.  DUD  Watching Bulldog try to move around the ring was just sad.

Meanwhile, Rock meets up with Arnold.  And then in real life, Arnold really did pass the torch as the big action star of Hollywood.

Meanwhile, Big Bossman crashes the funeral, complete with bullhorn mounted on a police car.  And then in the final touch, he hooks up the casket and steals it, which gives us the visual of Show surfing on the casket trying to stop it.  Separated from the ridiculousness of the angle 15 years later, it’s pretty goddamned funny to see Bossman go so far over the top as a cartoon supervillain.  And you know what?  Show beat the shit out of him and pinned his team in less than a minute at the PPV to get his revenge and then won the World title, so FINE.  He was a bad person and he got 100% of his comeuppance.  You can put all the heat on the heels you want as long as there’s a payoff!

Faarooq quickly runs Bossman into the railing and hits him with a chair while jumping off the announce table.  Stairs to the head get two.  Sadly, Albert comes out and maces Faarooq, and Bossman pins to retain at 2:30.  DUD

Meanwhile, Chyna thinks that Jericho has “Va-Chyna Envy”.  See, because Jericho has a SMALL PENIS.  Wasn’t the Attitude Era so great?  Anyway, who let her talk?  During the break, however, Jericho storms in and assaults her with various feminine hygiene products.  So obviously it took them a while to shake off the Russo-ness.

Chris Jericho is here, and he’s not OK with feminism or women winning titles.

Jeff baseball slides Sexay and follows with a senton to the floor, but back in Sexay gets a backdrop suplex.  This was actually the first time they started calling them “Sexay” and “Scotty 2 Hotty”, in fact.  Sexay with a northern lights suplex for two and he goes up, but Jeff goes low and brings him down with a rana for two.  Jeff to the top, but Scotty runs interference.  Jeff tosses him out of the ring but only gets two on Sexay thanks to Terri.  More shenanigans and Sexay hits the Stroke for the win at 3:31.  There was literally four or five people running around behind Teddy Long’s back at one point.  *

Meanwhile, Arnold thinks that Steve Austin should go see End of Days.  He would have been one of the few.

Vince McMahon is out to present Arnold with a WWF title belt to represent his status as “box office champion of the world”, which is kind of funny in that End of Days basically destroyed that reputation.

Meanwhile, D-X tries to attack Arnold, but it’s just some guy…and then they shrug and continue beating him up anyway.  Ha!

Ivory notes that Tori is into “smoked sausage” as we continue to learn valuable information about the penises of WWF superstars tonight.  All the women head to ringside to build up the “special one fall sudden death Survivor Series match” at the PPV.  So, you know, a match.  And of course it’s the big 8 person brawl.

Finally Rock’s music has been adjusted to the one he still uses today.  Odd how the change from “Do You Smell…” to “If You Smell…” could make such a huge difference.  Test is “injured” from earlier and so it’s 3-on-4.  Big brawl to start as X-Pac and Kane fight up the ramp and get counted out at 1:00.  HHH and the Outlaws beat on Shane as Arnold is SHOCKED at the violence while doing commentary.  He punched him right in the stomach!  That must hurt!  Gunn with a jackhammer on Shane for two and HHH slugs away, but Shane comes back with a spear on Dogg.  HHH cuts him off and pounds away in the corner, and Dogg slugs him down before Rock has finally had enough and puts him down with a clothesline.  But Billy Gunn sneaks in while the ref removes Rock, and hits Shane with the fameasser to eliminate him at 5:53.  So the Rock is alone, but Test makes a miraculous return, perhaps with the fast-healing powers of steroids, and chokes out Dogg in the corner for his big highspot.  Gunn hits him with a chair and gets DQ’d at 7:10, however.  Dogg and Test collide and it’s finally hot tag Rock.  Rock Bottom ends Dogg at 8:30.  Test comes back in and HHH goes low for two.  And then he finally just puts the ref out, and Austin hits HHH with a chair and puts Test on top for the pin at 10:10.  And then HHH goes after Arnold and gets his ass kicked, which I’m sure he was more than happy to do.  Like, HHH just sold like crazy for him there.  Anyway, the match was kind of junky, but fine.  **1/4  Really really weird booking, though, as they KNEW Austin wasn’t going to be there on Sunday, but they still put all this heat on the Rock/Austin/HHH feud anyway, and then had Test go over for the finish when they knew that wasn’t going to be the big swerve for it.  Like, if they really were going to pull the trigger on Test and give him the title at Survivor Series that would be one thing, but they had no intention of doing that.

So here’s what we learned:  Billy Gunn has a large penis, Chris Jericho has a small penis, and Kane has a “smoked sausage”.  Also, D-X thinks that rape is hilarious, and 1999 was really fucking awful until HHH suddenly became awesome in December and finally lived up to the push he had been getting for the past six months.