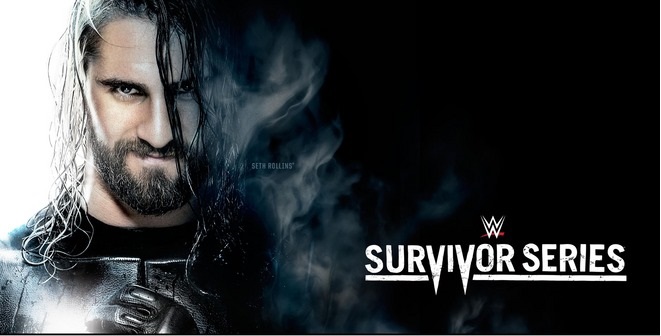 Live and FREE (except for those already subscribed to the Network, or Canadians, or those without broadband access who have to order the PPV) from St. Louis, MO.

Vince McMahon is out and guarantees we won’t forget this show. This brings out HHH & Steph, who are in full kiss-ass mode, as well as John Cena. Vince recaps the stakes tonight and Cena wonders if he’ll have to personally throw HHH out of the building later. Stephanie clarifies that even if they lose, they’ll still be running the show from Stamford, but Vince re-clarifies that in fact they will be fired from running the show ever again. And the only person who can bring them back is John Cena. You’d think that would be the kind of exposition that would be on the RAWs leading up to the show. And really, they can’t even commit to firing the Authority? They have to remind us that they’ll still be given cushy office jobs even if they lose?

Great, four teams where I have no way to tell them apart. I hate that. Fernando rolls up Stardust for two, but Miz (or is it Mizdow?) rolls up Fernando for two. Fernando and Miz do a goofy sequence while Cole overexplains the Mizdow gag and thus kills it. JBL notes that Papa Shango cursed Mizdow years ago and that’s why he can perfectly emulate Miz. Jey exchanges chops with Fernando, but Stardust pulls down the top rope and the tag champs work Jey over. You know this whole thing is a big buildup to Mizdow getting a hot tag and the crowd exploding so I bet the crowd is indifferent to everything leading up to it. Miz tags himself in and Diego runs wild on him with a backstabber for two. Miz comes back with a beating in the corner and they do a really clever bit where Miz poses for boos and Mizdow mirrors the pose to cheers, and finally Miz tags him in. And then Goldust tags himself in immediately and the crowd is robbed of Mizdow again. So the Dusts beat on Diego with more boring stuff and Stardust informs us that we don’t want Mizdow, we want him. Good to know. Diego keeps taking a beating while the crowd only cares about Mizdow. Stardust with a sunset flip on Diego for two, but they exchange tombstone attempts and Diego gets a tornado DDT and brings in Jimmy. He runs wild on Goldust and the crowd absolutely does not care. They clear the ring with superkicks but Goldust powerslams an Uso for two. Dogpile on the floor and the Usos hit them dives while JBL cheers like a dork. So everyone is out after the trainwreck and we get the Tower of Doom spot, but Mizdow tags himself in and steals the pin on Goldust for the tag titles at 15:41, finally giving the crowd their payoff. And of course Miz keeps both titles. **1/2 More like a RAW match, but it was the right time to pull the trigger on the Mizdow deal.

Steve Austin comes to the WWE Network with his podcast next week. Now that’s an awesome idea.

Meanwhile, Adam Rose and the Bunny settle things with action figures. Welcome back to 1995. Slater Gator interrupts the proceedings, and Rose challenges them to a tag match tonight.

Paige dumps Nattie and brings in Layla. Emma rolls Layla up for two while the announcers immediately start ignoring the match and making jokes about Doink the Clown in 1994. Paige beats on Emma while JBL starts talking about Alundra Blazye & Aja Kong for some reason. They fight on the top and Emma gets a superplex, but Paige tags out to Cameron. Apparently the Funkadactyls split up at some point when I wasn’t paying attention, which would narrow it down to the past three years. The crowd is so excited that they chant for Mizdow. Naomi comes in with something resembling a crossbody and follows with a stunner for two. Everyone runs in for some reason and we get more embarrassing spots before Naomi rolls up Cameron to eliminate her at 6:27. Over to Summer, who stomps Naomi down for two and shoves all the faces off the apron. The announcers continue reminiscing about stupid Survivor Series teams while this match just keeps going for no reason I can fathom. And then we get Fox teasing a highspot on the heels before backing off and yelling at them for being chicken. JBL clarifies that this is “The old chicken spot.” This match feels like a rib on all of us. Fox pins Layla with a backbreaker at 9:35. Nattie dominates Summer, but gets booted by Paige from the outside. Summer celebrates prematurely and gets knocked off the apron, so Paige throws her back in and Emma finishes her with the Dilemma at 12:05. This leaves Paige alone and friendless, much like watching this match feels like, and she wisely takes a walk, but the faces cut her off. Naomi misses a moonsault but hits the butt-butt for the pin at 14:20 to sweep the heels. * for Tyson Kidd standing at ringside like a douchebag the whole time and then celebrating for the ladies when they win. Otherwise this was a total disaster.

Slugfest to start and Ambrose stomps him down in the corner, but they brawl to the floor, where Wyatt takes over. Back in, Ambrose comes back with a corner clothesline and they head to the floor again, giving us the best sign of the night: “HA HA / I LOVE IT / MAGGLE!” Back in, Wyatt with a senton for two while the stream drops to dial-up modem quality off and on. And I’m watching this on the PS3, with a hardwired Ethernet connection, so the problem is not on my end. Back to the floor and they collide with a clothesline out there and then charge back in to beat the count. Ambrose makes the comeback with a bulldog and does his own crabwalk in the corner (“That’s what Bray Wyatt does!” notes Michael Cole) and guillotines Bray for two. They fight over a superplex in the corner, but Wyatt fights him off and hits the uranage for two. Senton misses and Dean gets two, and follows with a crossbody for two. Wyatt cuts off his comeback with a lariat and Ambrose bails to the floor, so Wyatt drops him on the stairs and back in for two. Bray is so distraught that he stops to cut a promo about how they should be ruling the world together, and chairs get involved for some reason. And so Ambrose lays him out for the DQ at 14:03 for the shit RAW finish. Mediocre match with no real finishing sequence or ending. ** Ambrose puts him through a table afterwards, buries him in chairs, and then hauls out a ladder to pose. So this is obviously setting up something at TLC. And in fact they announce later in the show that they’ll have a TLC match next month.

And hey, here’s some commercials for Kmart.

Adam Rose immediately runs into a Slater high kick for two as the announcers give up on the match and start making rabbit jokes. Slater Gator double-team Rose in the corner, but he makes the hot tag to the Bunny, who cleans house and hits a missile dropkick for the pin on Slater at 2:34. The entourage leaves with the bunny and abandons Rose, as they’ve been running this storyline for weeks now with no point evident. DUD

And now some commercials for knockoff WWE Lego and Larry the Cable Guy.

Roman Reigns does a satellite interview. He dislikes Seth Rollins and he’ll be back in a month.

Brie grabs AJ for a kiss, and Nikki pins her with the Rack Attack at 0:30 to win the title. DUD See ya, AJ, enjoy married life. So I guess the Bellas are reunited. And yet they gave the elimination match FIFTEEN MINUTES?!?

Big Show knocks out Mark Henry at 0:45. Which makes one wonder why he doesn’t just do that all the time. Rollins tries to attack Show and gets chased out of the ring, so Kane comes in and gets dominated by Cena. Next up, the big Harper v. Rowan showdown, but Rollins tags himself in to prevent that. So Ryback overpowers him, and splashes Kane for two. Rusev comes in and walks into a spinebuster and clothesline, and it’s BREAKING LOOSE IN TULSA. Rollins curbstomps Ryback and Rusev pins him at 8:08 to even it up. Rusev slugs away on Big Show and then tags in Harper, who puts Show down with a dropkick. The heels pound away on Show, but he gets the tag to Ziggler as the announcers discuss the “elation around the world” if the Authority loses. Oh come on now. Ziggler quickly gets beat down and worked over, and it’s VINTAGE KANE with a sideslam for two. Big boot gets two. Apparently the Authority will somehow gain “absolute power” if they win, despite Vince already being established as above them in the fake hierarchy. Dolph fights back on Rusev, but gets slammed for two. Cole notes that Ziggler has “the uncanny knack for being able to hang in there.” Except for all the matches that he loses. Rollins runs Ziggler into the corner and Rusev chinlocks him, until Dolph fights back with a DDT on Rusev for two. And then it suddenly breaks down again with everyone hitting their finishers and a big trainwreck on the floor. Rusev puts Ziggler on the Spanish table, but misses his splash and puts himself through the table for the countout at 21:03. Lame. Back in the ring, Cena runs wild on Kane, but Rollins comes in with a curbstomp and Cole is OUTRAGED. What does he want the ref to do, tackle the guy on the way into the ring? Harper and Rowan renew their rivalry, and Harper finishes him with the lariat at 24:12 with an assist from Rollins. And then Big Show turns on Cena and Rollins pins Cena at 25:00. How many heel turns now for Big Show? And Show walks out at 26:15, leaving Dolph Ziggler by himself. Way to go John, maybe don’t be such a selfish dick. So it’s Ziggler v. Harper, Rollins and Kane and they toy with him, but Ziggler gets the Zig Zag on Kane at 29:33. Ziggler bails and Harper follows with a dive on him. Back in, superkick gets two. Powerbomb gets two. Ziggler grabs a rollup and hooks the tights for the pin at 31:38, and it’s down to Rollins v. Ziggler. Seth beats on him outside, but a small package gets two in the ring. DDT gets for two Ziggler. Rollins powerbombs him into the corner for two, and goes up to finish. Flying knee misses and the fameasser gets two. Rollins blocks the Zig Zag, but a second one hits and HHH pulls out the ref. The beatdown is on and Rollins gets another powerbomb, but Ziggler gets another Zig Zag and HHH lays out another ref. So this time he takes matters into his own hands and beats on Ziggler personally with a KICK WHAM PEDIGREE. Scott Armstrong comes out to count, but STING IS FINALLY HERE. And he’s not taking HHH’s shit tonight. HHH takes the deathdrop, Ziggler gets put on top of Rollins, and the Authority is finally done at 43:14. I wouldn’t say this saved the show, but the drama with Ziggler fighting alone at the end was off the charts, and the one match on a one-match show delivered. ****

Although the main event exceeded expectations, the rest was a boring mess on a night where they were supposed to winning over new fans.

Thumbs in the middle, leaning down.