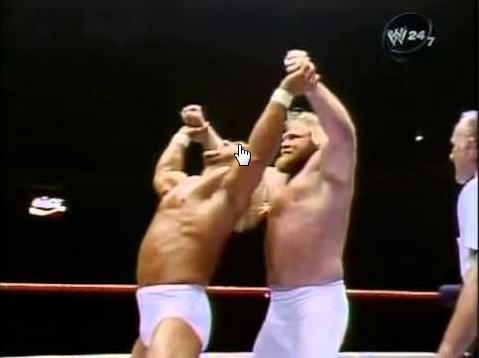 Your hosts are Gorilla Monsoon & Mean Gene, or as I call them, Gino and Gene O.

Sal works on the arm to start and controls with a headscissors on the mat.  Schultz has enough of that nonsense and just plants him with a pair of knees to the gut to take over, as it’s obviously time to start squashing the crap out of him.  Dr. D was a guy who should have made his millions doing a run with Hogan on top and living off that forever, but he famously self-destructed.  Schultz pounds the hell out of Sal and drops an elbow off the top for two, and a suplex gets the pin at 4:08?  Kind of a weird finish.  *

Just in case you had him confused with Afa the Chartered Accountant.  This is thoroughly random, not to mention that the Samoans were apparently babyfaces at this point and trying to work their way into title contention again via beating the champions in singles matches.  What is this, RAW?  Murdoch quickly hides in the corner and cowers away from a punch, which kind of undermines all his tough talk before the bell.  Another lockup and Murdoch flees in terror a second time.  That’s just tremendous because he immediately goes back to talking tough again.   Afa tries a headlock and Murdoch hides in the corner and then talks shit after getting the break.  Back to the headlock, but Dick breaks with a bionic elbow…and hurts himself on Afa’s head.  Murdoch challenges him to some fisticuffs, but then hides behind the ref and keeps making the stupid mistake of attacking Afa’s head.  Afa sends him flying out of the ring on a crazy bump, but Murdoch FINALLY cheats to take over and chokes him out on the floor with a cable.  Back in, Murdoch pounds away, but Afa no-sells it and makes the comeback, biting him in the corner for his big highspot.  Afa with a pair of atomic drops that Murdoch sells like a clown, going full on Terry Funk with it.  Afa gets two, but Murdoch keeps getting into the ropes.  Murdoch goes flying out of the ring again off a headbutt, and this time grabs what appears to be a wino’s bottle of hooch.  This puts Afa down and Murdoch drops the big elbow for two.  They butt heads on a collision and both are out, but Afa recovers first with another headbutt for two.  They slug it out and Murdoch continues his exaggerated Three Stooges heel routine, even spinning on the mat like Curly earlier in the match.  Afa gets two off another headbutt and time expires at 19:11.  THANK GOD.  Watching Murdoch try to clown his way out of negative stars was amusing for the first 2 minutes, but Afa is just the dirt worst at this point, lumbering around and letting Murdoch bounce off him for the other 18 minutes.  -**

Mad Dog works a headlock and uses the BACKRAKES OF DOOM to subdue McGraw, but he fights back with chops in the corner.  He throws a dropkick and Vachon misses a blind charge, which gives Rick two.  Another dropkick gets two.  Slam gets two.  Vachon evades a third dropkick and chokes away on the ropes, which gets two.  Piledriver finishes at 7:21.  Mad Dog didn’t last long in the WWF, especially at this point in his career.  ½*

I feel like the chances of a good card are rapidly going downhill.  Poor David was just the wrong guy in the wrong place at the wrong time and probably never had a fair chance.  David with a press slam after throwing Spot around a bit, and Spot bails.  Back in and David works an armbar FOREVER, until Spot gets a cheapshot and whips him into the corner to take over.  A very long chinlock follows, and a backbreaker gets two.  David comes back and wins a slugfest, and a suplex gets two.  Pretty lazy covers on David’s part.  Spot gets a slam for two, but a second one is reversed into a cradle for the pin by David at 13:10.  The replay clearly exposes David tapping on Spot’s side to signal him to go down for the finish.  Way too long.  ½*  David was trying way too hard to be his father, and it just killed his in-ring career.

THANK JEBUS!  This first hour of shit prelim matches had been sucking my will to live.  So yeah, Hammer stole the IC title a month before this, and Tito is PISSED.  No lockups, as he beats the shit out of Valentine right away, chasing him to the floor for a brawl out there before Valentine finally wins the slugfest in the ring.  And now Greg just pummels on Tito, and adds an atomic drop.  Tito bails and pulls Valentinue out for another fight on the floor, and Greg just starts throwing chairs until Tito responds with a chair IN THE FACE and this has gotta be a double DQ.  Valentine is bleeding and finally the inept ref calls for the bell.  So Tito kicks Valentine’s ass, Lou Albano’s ass, and possibly the ref’s ass as well.  Fun but too short.  **

Rocky tenaciously holds a headlock while we get a rather disturbing closeup of his crotchal region on the mat.  What is Patterson doing near the director’s truck again?  They exchange shoulderblocks and Rocky holds a headscissors on the mat.  Patera reverses out and goes to the chinlock and that goes on for roughly two years with good behavior.  Rocky finally escapes and comes back, with 12 minutes gone mind you and nothing but chinlocks making it up, but Patera elbows him down for two.  Rocky with a rollup, but Patera grabs the tights and gets the pin at 13:05.  Mean Gene is AGHAST at these backdoor shenanigans.  DUD

Oh god, the other half of this crap feud.  Sika tosses Adonis to start and holds a lengthy wristlock, which is a common theme tonight.  This fucking armbar goes on so long I actually find myself FALLING ASLEEP.  Adonis finally puts him down with a knee, but makes the tactical error of using a loaded glove and gets DQ’d at 6:55.  Thankfully there’s only two of the Samoans to deal with here.  DUD

I think I might have slept through another shit match, doesn’t matter, not rewinding.  The backstory here is that Slaughter is upset about the Russians boycotting the Olympics and is TAKING IT OUT on Volkoff.  Slaughter threatens to slam Volkoff, and the crowd is so happy to see something other than an armbar or headlock advertised that they pop for it.  Slaughter overpowers him for a bit and the crowd informs Volkoff that he sucks.  I feel like chanting that at this show.  Slaughter gets the clothesline, but Volkoff catches him in a bearhug until Slaughter breaks free.  Volkoff drops a knee off the middle rope and runs Sarge into the post, which I think was supposed to draw blood, but Sarge is a miserable failure at gigging himself here, even though he’s clearly laying on the mat and doing it right on camera.  The announcers are even talking about how he’s bleeding, before it becomes apparent that he’s not.  Volkoff whips him into the corner for two and adds a backdrop for two.   Slaughter makes the comeback and catapults him into the corner, but Volkoff whips him into the post AGAIN and Slaughter hits the floor.  I know he loves that spot, but three times in one match?  Volkoff runs him into the post on the floor for good measure, and Volkoff stupidly keeps breaking the count by arguing with the ref.  Finally Slaughter has had ENOUGH of these communist shenanigans and puts Volkoff in the cobra clutch, but like an idiot he does it while standing on the apron and gets counted out at 16:00.  Yeah, OK.  *

I do rewind here, and it turns out I slept through a bunch of backstage interviews.  So you can rest easy now.

OH COME ON.  This whole show is like a huge rib on me.  They trade headlocks and Garea gets a bodypress, but Beefcake unleashes the POWER OF THE CHOKE and clubbing forearms to take over.  Garea makes the comeback and rolls him up for two, but walks into the high knee and gets pinned at 6:22.  ½*

At least this will be short given there’s only 10 minutes left in the show.  Hulk slugs him out of the ring and they brawl on the floor, as Studd takes over quickly.  He pounds away with elbows in the ring and goes to a chinlock, then adds a clubbing forearm from the middle rope.  Back to the chinlock while Bobby Heenan yells instructions like a crazed hockey mom and Hillbilly Jim watches at ringside.  How could a hillbilly plausibly afford ringside tickets in MSG?  Hogan bails to escape the crushing force of the chinlock, and Studd slams him on the floor.  Back in, that gets two.  Hulk makes the comeback as he’s still working out the kinks in the act at this point, and puts Studd down with a running elbow and elbow drop for two.  Lariat finishes at 6:14.  Music note:  “Real American” is conspicuously dubbed in here over “Eye of the Tiger” after the finish.  *1/2

I DO NOT recommend watching this borefest late at night when you’re tired.