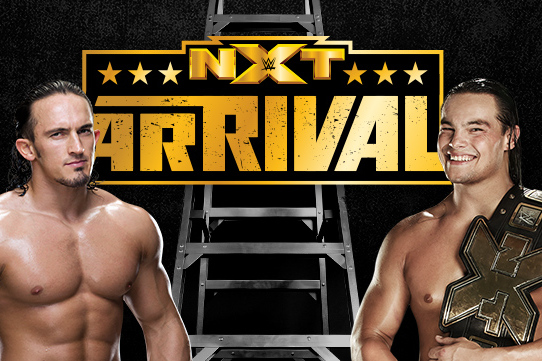 LIVE from Orlando, FL!  Well, I’m watching it on a two hour delay, but I COULD have watched it live.  Also, figuring out how to actually watch it was a bit of a challenge, too.

Cesaro takes Sami down and they trade headlocks to start, but Sami tries a rana, which Cesaro turns into a swing attempt, and Sami dumps him.  Whew.  Sami follows with a dive, and back in gets caught with a backbreaker for two as the fans are READY for this match to rule.  Cesaro tosses Sami around the ring multiple times and pounds the back into the apron, but Sami fights him off and tries his dive through the ringpost…and runs into a forearm.  Holy balls.  Cesaro starts pounding on the injured knee, and double-stomps it for two.  And then the goddamned Twitter plugs start.  Zayn fights back with a leg lariat, but Cesaro viciously grinds his boot into the knee and takes him down with a legwhip.  Half-crab, but Sami makes the ropes.  Finally he backdrops Cesaro to the floor and follows with a dive, but Cesaro catches him in a backbreaker and plants him on the ramp.  OUCH.  Back in, Cesaro charges right into a exploder suplex that gets two.  Blue Thunder Bomb gets two.  Cesaro goes back to the knee, but Sami wraps him up with a Koji Klutch, which Cesaro reverses into a horse collar (aka The Brock Lock).  Sami fights to the ropes again, but now it’s time for the Swing, which Sami reverses for two.  A second try works, however, and Cesaro gets 10 and follows with a forearm for two.  Sami reverses for two.  Cesaro kicks him in the head for two.  Or rather, stomps on his face like a grape.  That’s what I meant to type.  They fight to the top and Sami tries the rana, getting it after a false start thanks to the freakish strength of Cesaro.  The running boot gets two for Sami, but now Cesaro has had enough of these shenanigans.  Forearm puts Sami down and Cesaro advises him to remain there, and adds another forearm to emphasize his position.  Sami keeps fighting, however, and they slug it out like MEN.  Sami fires off a german suplex, but walks into a big boot.  Flip powerbomb gets two and now the crowd gives them a standing ovation.  Cesaro drops him with SWISS DEATH, but Sami kicks out at one and makes the comeback.  Cesaro LEVELS him with another forearm, and the Neutralizer ends it at 23:00.  No shame in losing to the best, Sami.  ****1/4  And Cesaro hugs it out to put Sami over as well, because he’s awesome.

CJ tries to get cute and gets backdropped, but comes back with a clothesline out of the corner.  He pounds away in the corner, but Mojo hits him with a pair of avalanches and finishes with the butt splash at 3:21.   Just keep staying the course, Mojo.  ½*

Meanwhile, the EmmaLution could culminate tonight.

The Ascension has a new generic cock rock theme and FINALLY matching gear, so maybe they’re getting ready to move up?  Victor pounds on Sexay and Conor puts him down with shoulderblocks and wallops him in the corner.  Viktor with a suplex for two.  Sexay fights out of a chinlock and makes the hot tag to Scotty, who evades a blind charge and gives us an NXT Worm.  Viktor cuts him off at the payoff, however, and they finish with the Fall of Man at 6:40.  They really need a huge payoff for this Ascension thing because there’s literally no one left for them to beat.  This match wasn’t so good, but the idea was just for the legends to put them over anyway.  This probably would have been the right time to find someone new to beat them, though.  Maybe once Enzo is back in business again?  *

And of course Stephanie has to get the spotlight before the match, because we needed more McMahons on this show.  And of course she has to play babyface here.  Hopefully Paige is over her mysterious ailment.  They fight for a backslide right away and Paige gets two.  She dropkicks the knee for two.  Slam gets two as the fans start dueling chants.  Paige with the headlock, but Emma works to the corner, so Paige chokes her out there.  Emma comes back with the slingshot, but Paige fights her off and throws knees from the apron.  Emma comes back with the Sandwich and Dilemma, which sets up a surfboard hold.  Paige fights out and makes the comeback, and they fight on top until Emma powerbombs her out of there for two.  Paige fights back with clotheslines and hits the Paige Turner for two.  Paige gets frustrated and uses a submission hold instead, which Regal notes is a Scorpion Cross Lock, and holy hell does it look like it hurts, forcing Emma to tap at 13:10.  This was really weird because the entire storyline was building up to Emma winning here, but then they called her up and couldn’t put her over.  This was like, a real match and everything, and they do the sportsman hug afterwards too.  ***1/4

Glad to see Tyler making the big show.  Too bad they couldn’t fit the Aiden English/Colin Cassady circus sideshow into this as well.  And then just to piss me off, the STREAM DIES at the 80 minute mark of the show and I can’t get past it on the PS3, as it thinks that the show is only 80 minutes long.  So it’s over to the iPad, which at least gives me the full two hours on the time count.  So close to everything working smoothly tonight.  So it’s back to the live stream for the replay, which puts me back into the Paige-Emma match again.  And 10 minutes later, we’re back here again, which ends up as no match because Rusev comes out and destroys both guys.  By the way, I know I commented earlier on the blog that I really enjoy Breeze’s entrance, but I didn’t need to see it 8 or 9 times in a loop.  I really hope they get this shit worked out by Wrestlemania.

Shawn Michaels is out to hang the belt and plug his DVD in a funny bit, and the replay stream threatens to cack on me as well but pulls through like Sami Zayn making the babyface comeback.   Bo tries to run away and gets cut off by Neville, who quickly goes for the Red Arrow and forces Bo to run away again.  Bo takes over with a cheapshot and throws elbows to put Neville down.  Bo wraps him up in the ropes and gets the first ladder, but Neville cuts him off with a pescado.  They fight on the floor and Neville backdrops out of a piledriver attempt and makes the first climb in the ring.  Bo brings him down with another ladder and makes his own climb attempt, but Neville pushes him over from underneath the ladder.  Neville climbs and Bo returns the favor.  Bo works on the ribs and throws short clotheslines in the corner, but Neville escapes a Bo-Dog and sends him into the ladder.  They slug it out on the ladder and Bo goes down, but Neville tries to go up and again and gets shoved to the floor.  Bo climbs, but Neville leapfrogs over him and nearly gets the belt.  That was cool.  Bo powerbombs him into a ladder in the corner, but Neville slams him onto a ladder and finally gets his Red Arrow this time.  Yeah, that would suck for both guys.  Bo is dead on the floor and Neville climbs to claim the NXT title at 15:50.  No other finish was possible.  Solid match, but not a show-stealing classic like the opener.  ***1/4

I can’t imagine a better first impression for people watching NXT for the first time.  Well, aside from the issues with the stream, that is.  But the show was awesome, easily the best WWE PPV since Summerslam.  No nonsense, clean finishes, and video packages that actually explain the characters for new viewers.  Big thumbs up!