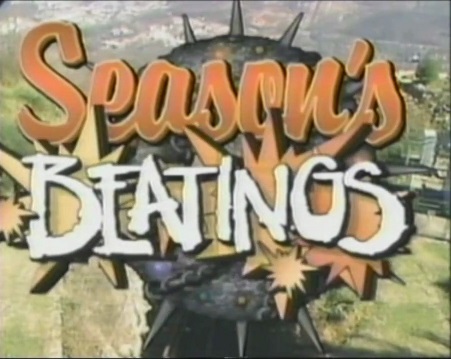 Oh Dusty, we hardly knew ye and your wacky subtitles.

The Midnight Express really got fucked over in this deal, as they won the World tag titles while holding the US titles, got stripped of the US titles as a result, and then lost the World titles before the tournament to fill the vacant US titles was even finished!  This was of course supposed to be Fantastics v. Sheepherders, but the WWF came calling and semi-finalists Simmons & Gilbert got the spot instead.  Simmons overpowers Fulton, so Rogers comes in with a dropkick and it’s over to Gilbert.  He trades struts with Fulton while they cut to the crowd a bunch of times for some reason.  Gilbert controls with a headscissors on the mat and Simmons works on the arm, but Fulton dumps him to escape and catches him with a small package for two.  Rogers comes in and Ron flattens him with a football tackle, and it’s back to Gilbert for some nice mat wrestling with Rogers.  And after all that stalemate buildup, Simmons misses a charge and the Fantastics go to work on him in the corner.  Now we’re getting somewhere.  Rogers works on the arm, but gets caught in the corner and Gilbert hits a neckbreaker for two.  Suplex gets two.  C’mon, someone play heel already.  Both sides tag and Fulton drops a leg on Simmons for two and goes to the chinlock, setting up a Rogers kneelift for two.  Back elbow gets two.  Simmons batters him in the corner, however, and now Gilbert EMBRACES THE HATE.  Cheapshot and atomic drop get two.  Backdrop suplex gets two.  Simmons comes in and misses another charge, but recovers with a powerslam on Fulton to counter a bodypress.  Gilbert rolls him up for two, but Rogers sends him flying into the railing and apparently injures Eddie’s elbow.  Back in, Rogers is hesitant to go after him, but then gets over it and just cranks on the arm anyway.  That’s the spirit!  Into the corner for more double-teaming and I thought maybe Eddie was goldbricking, but no, he’s just in tremendous pain and the Fantastics keep beating on the arm.  Hey, worked for the Andersons.  Rogers with a short-arm scissors, but Gilbert rolls him over for two, so it’s back to Fulton again.  The ring announcer counting down to the time limit kind of raises the question of what would happen if time expired.  It’s a tournament final!  The Fantastics keep switching off on the arm and JR indeed raises the time limit question while Rogers really cranks on the armbar.  Gilbert bails to escape, but Fulton tosses him back in…and walks into the stungun.  Gilbert makes one last charge, however, and hits the post, allowing Fulton to roll him up for the pin and the titles at 26:53.  Really interesting dynamic here with the Fantastics going against their babyface image and doing what needed to be done to win the belts.  Sadly, they jettisoned that direction and lost the belts to the Varsity Club at Starrcade a few weeks later, and then left the promotion.  ***1/2

The Stallion dominates with armdrags to start for some reason, until Doc powers him down.  Stallion tries an armbar for a bit, but Doc tosses him and Kevin Sullivan gets the cheapshot on the floor and Williams beats on him out there.  You’d think with Williams joining the Varsity Club for his big heel turn, they’d book him to go out and destroy some geek, rather than going back and forth with the damn Italian Stallion.  Williams with a delayed suplex, but Stallion makes a comeback, so Williams goes to a sleeper that goes on forever.  And Stallion makes ANOTHER comeback, so Doc dropkicks him for two and now goes to work on the leg.  And then to the floor for a further beating, and back in for a flying splash that misses, and FUCK ME it’s another Stallion comeback.  Just finish this doofus off already.  Finally the Stallion is dumb enough to try a bodypress, and Doc catches him and puts him away with the Oklahoma Stampede at 15:20.  Who booked this shit to go 15 minutes?  *1/2

Junkyard Dog returns to the NWA, and apparently did a SHITLOAD of blow before the show.  Like, he looks like he’s ready to go build an Ikea bedroom set or something to channel his excess energy.  Not that I’m accusing him of anything.

Ivan has one hand tied behind his back and still manages to beat on Jones regardless.  So this is about as exciting as two old men in a wrestling match is gonna be.  Jones finally chokes Ivan out with his own arm rope and pounds away, but he brings in an international object and Koloff steals it for the pin at 8:00.  They couldn’t have done that finish in a minute?  DUD  The Russian Assassins storm in for the beatdown to wake up the crowd, and JYD makes the save.

Winner of this gets control of the prestigious six-man titles that most people had literally forgotten about by this point.  Dusty is wrestling with one eye because of his acrimonious split with the Warriors and he’s mighty upset about it.  Dusty goes after the leg and smacks the ref out of the way to do so, which allows Animal to cheat and go after the eye.  And then it turns into a big schmoz with Sting and Hawk hitting the ring for the brawl.  Oh, and Dusty was disqualified and loses the six-man titles as a result.  EPIC.  DUD

This is basically all four guys in their stone cold primes, with the Lane/Eaton Express just coming off their only World tag titles, and the Horsemen holding both singles titles.  Eaton immediately slaps Flair down and does his own strutting.  They slug it out in the corner and we get the Flair Flip, ending with Lane slugging him down on the apron.  Stan in with a sidekick and an enzuigiri, but Flair makes the tag to Windham.  Lane hits him with a dropkick and the Horsemen regroup, allowing Windham to slug Lane down.  He goes up and misses an elbow, and Lane puts Windham onto the floor with a kick and slingshots him back in.  Here’s Windham, this GIANT dude, bumping all over for the smaller Express because it WORKS and he knows it.  I love it.  Eaton hits Flair with a series of slams and clotheslines both Horsemen, so they bail and regroup again.  Back in, Lane takes Flair down for a figure-four, and Eaton gets his own on Windham as it’s the Rock N Roll Express tribute spot.  Flair finally dumps Lane, but Stan comes back in with an elbow for two.  Lane and Flair slug it out and Flair goes down again, but finally gets a cheapshot on Eaton to gain some momentum.  Eaton slugs him down, however, and Lane adds an elbow, but he falls prey to a cheapshot from Windham while Paul E. Dangerously drops in with a promo.  Flair goes up and takes too long, allowing Lane to slam him off, and Eaton comes back in to pound him in the corner.  Another Flair flip, but this time it ends with Eaton getting a neckbreaker.  Express with the FLAPJACK on Flair, and that gets two.  Eaton with a rollup for two, but Windham nails him from behind to break it up and make Eaton YOUR face-in-peril.  Windham with a delayed suplex and powerslam, and Flair drops the knee and slaps him around.  Eaton gets dumped and Flair adds some nasty chops on the floor, then brings him back in for more.  Windham blows in with the lariat for two.  Side suplex and he drops the knee and grabs the sleeper, but Flair comes in for the slugfest with Eaton and he loses.  Hot tag Lane and the Express gets the DOUBLE GOOZLE on Windham (with a great delayed sell), setting up the Alabama Jam.  The managers brawl at ringside, allowing Flair to nail Eaton with JJ’s shoe and Windham to steal the pin at 17:40.  ****

I actually really liked the opener, and of course the main event is an underappreciated classic, but GOOD GOD it’s a wasteland of crap in the middle.  Thank god they blew it up and completely changed direction after Dusty left.