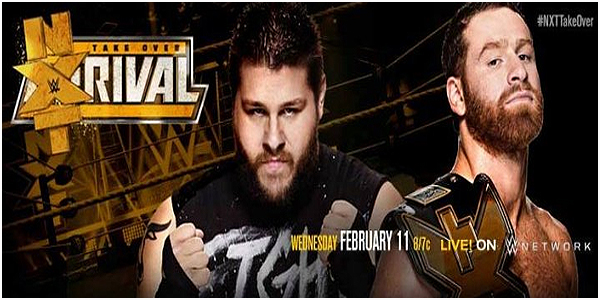 Wrestling fans have had the luck and privilege to see many wrestling stars travel the hardest roads to make it in WWE together, but perhaps no story parallels the path of Kevin Owens and Sami Zayn.

Kevin Owens was told he was too fat to ever be a wrestler. He proved those critics wrong. He was told he could never main event a promotion. He proved those critics wrong. He was told he would never make it in a company like Ring of Honor because he relied too much on charisma and didn’t possess the right workrate to ever “get over”. He proved them wrong. He was told he could never be Ring of Honor World Champion. He became one of the best ROH World Champions of all-time, and…proved those critics wrong. He sold out Hammerstein Ballroom. He’s main evented major pay-per-view events. He’s wrestled blood baths and technical masterpieces from coast to coast and around the world. He’s wrestled first ballot Hall of Famers. To say he’s overcome every obstacle in his path is an understatement. When he met Sami Zayn in Canada fifteen years ago, everyone always liked Zayn more. They said he wrestled better, he sold better, he had a better look. Zayn was always destined for success. Fans adored Sami Zayn. They chanted his name, they cried when he was hurt. No one cared about Kevin Owens. Sami Zayn was the chosen one. And that lit a fire under Kevin Owens like no one had seen before. When Owens finally got his chance to make an impact in the WWE two months ago, he placed a target on his former best friend and powerbombed him onto the ring apron in a show of pure brutality. Later, Owens said of the attack “If I am willing to do that to my best friend to get what I want, what would I be willing to do to someone else?”

Only six months ago, wrestling fans saw Brock Lesnar brutalize John Cena at the premier summer pay-per-view SummerSlam to win the WWE World Heavyweight Championship in similar fashion, so critics have asked, is the brutalization angle already becoming stale? The answer is no. This type of presentation is what creates amazing babyface comeback angles. The eventual comeback, whether next week, or next month, or next year, creates powerful and important moments for us to remember forever. It’s been an approach that has been long ignored in WWE. Vince McMahon has long favored powerful babyfaces who overcome the odds ritually every night to give the fans what they want. Wrestlers like Hulk Hogan and John Cena always stood tall at the expense of the bad guys. After 30 years of the good guy coming out on top after getting beat down, this was a nice change of pace. Due to this, fans have began to embrace the brutalization from the bad guys, much in a way many people enjoyed The Joker and Bane in Christopher Nolan’s Batman trilogy. But that’s not the company’s intention or direction. They want guys like Brock Lesnar and Kevin Owens to be hated. But the fans are banding together and telling the company what they want, and who they want to see*. Contrary to the overall rejection of Roman Reigns at Royal Rumble, the fans weren’t rejecting Sami Zayn, they were simply getting behind Kevin Owens and the story was being told.

Wednesday night we paid witness to the birth of a new era of wrestling. The Era of Kevin Owens reign as NXT Champion. Because Wednesday night at precisely 9:55 PM, Kevin Owens tried to kill Sami Zayn. He tried to kill his former best friend because Sami Zayn stood between Kevin Owens and the NXT Championship. After a relentless flurry of powerbombs and neckbreakers, Zayn could barely stand. Zayn shouldn’t have gotten up. It was against conventional wisdom to sustain more damage. He was operating on pure adrenaline and instinct. Kevin Owens didn’t want to pin the champion to win the title. He wanted to end his career. That was hate. It wasn’t good enough to pin him, he wanted to break his spirit. The referee stopped the brutality and awarded the match, and the championship, to Kevin Owens, who stared down at the puddle of skin, and bones, and facial hair, which was formerly Sami Zayn, and he smiled. He bowed. Kevin Owens loved what he did. The fans were shocked. They were disgusted. And they cheered! And they chanted “Kill Ow-ens Kill!…Kill Ow-ens Kill…KILL! OW-ENS! KILL!”, faster and louder like the sounds of heart throbbing, beckoning the new champion like he was a gladiator in the Roman Colosseum who had appeared out of nowhere and won over their bloody hearts and minds. They didn’t cry for Sami Zayn (outside of a few clearly shown on camera for effect). They pointed their thumbs down. They embraced the dark side.

Wrestling fans haven’t always been such a fickle bunch. Twenty-five years ago, children and adults alike cheered Hulk Hogan and booed Randy Savage in the WWF. They cheered Sting and booed Ric Flair in WCW. We knew who the good guys were. Guys like Hogan and Sting told us to say our prayers, they clapped our hands, they smiled. They promised they’d get up when they were knocked down. They were role models. Ric Flair walked around in his expensive robes, he flew in jets, and limousines. On each arm was a beautiful woman every night. He was the envy of every man’s desire. And because of that, we hated him. But the landscape shifted in 1997 when a new “attitude” crossed main stream, whether it was the introduction of Extreme Championship Wrestling as a major force, or, the aging of the children who supported the likes of Sting and Hogan when they were young wanting something new, something edgy, something fresh – fans started to cheer the bad guys. Wrestlers like members of the nWo, Steve Austin and Shawn Michaels rubbed against the conventional wisdom of wrestling. Steve Austin drank, waved the middle finger, swore and defied his boss. The nWo dressed in black, they wore sunglasses, they were “cool”. Shawn Michaels told the fans and his bosses to suck it if they didn’t like what he did. And these acts started to divide fans across all facets of wrestling. They wanted to relate to people like this. This was who they wanted to be. This established an anti-hero mantra, a “cool bad guy” grey area and fans got behind it. Retrospectively, this period was only a flash in the pan, but the effects of D-Generation X, ECW, the nWo, and Stone Cold Steve Austin not only rejuvenated fans interest, it made new fans, and wrestling rode that wave to a boom period. All good things come to an end though. Injuries derailed the careers of Steve Austin and Shawn Michaels, ECW and WCW went out of business, and WWE was left alone to pick up the pieces of the greatest period in wrestling history.

Strangely enough, this grey area found itself trickling into Hollywood, especially that of hit television shows. Can we thank wrestling fans for getting behind DX, the nWo, Steve Austin, and ECW for the realization that “cool bad guys” can draw money? Possibly. Let’s look at some of the top dramas of the 1990s. Shows like “ER”, “Star Trek: The Next Generation”, “The X-Files”, “Law & Order”, “Walker: Texas Ranger”, and “Buffy” all gave us good guys to cheer for. They were cookie cutter good guys or ladies. They always did the right thing. They always came out on top. But around the turn of the decade, television shifted and changed course rapidly when “The Sopranos” aired. For the first time, viewers could relate to the bad guy. Tony Soprano was the head of a MAFIA ORGANIZATION who killed people that got in his way. Yet, he was the main character not the villain. That blood lust from fans drove the show to unmentionable success and critical acclaim. For the first time, the bad guy could win. What followed was a flood of dark dramas such as “The Wire”, “Dexter”, “Breaking Bad”, “Mad Men”, “The Walking Dead”, “House of Cards”, “Game of Thrones” and “Sons of Anarchy” where the bad guy was the main character and driving force to the shows heart beat. Without these revolutionary shows, television might never be the same. We can all relate to Walter White, Francis Underwood, Jax Teller, Stringer Bell and Omar, Rick Grimes, Don Draper, and others. We relate to Kevin Owens. We want to be a sliver of them. That’s why we love them. That’s why we cheer them.

(*According to Wrestling Observer, the company is very pleased with the amount of attention and the new fan base that signing Kevin Owens has brought. WWE Network subscriptions went up when the championship match was announced, and Owens has sold more merchandise than any talent in their first two months ever. Those two things mean good things for Kevin Owens future.)