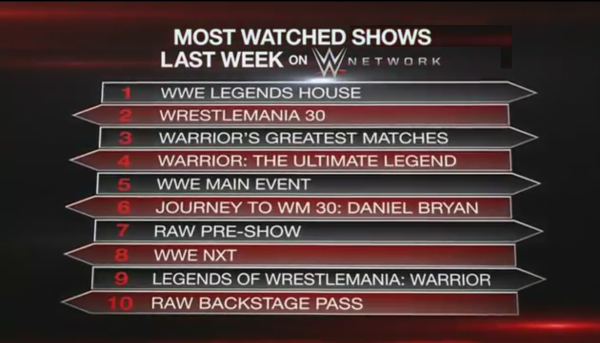 One of the things that I think has the potential to be so great for WWE coming out of the WWE Network is an unbridled opportuntity for a more direct collection of analytics from their paying customers than they’ve ever had before. Seeing what’s swimming and what’s sinking will allow them to not only tailor their future programming, but act with the confidence that they KNOW what’s “in tune” with the paying audience, know what they like, and what they can exploit in order to get those folks to open up their wallets in the future, not to mention tell their friends and get THEM to hop onto the train.

I think WWE will keep a lot of their data hidden – as they should, because releasing what’s essentially intellectual property for the sole purpose of satisfying MY curiosity PROBABLY isn’t the best business move – but a tantalizing morsel here and there will really keep me excited…and probably starting threads like this one.

What I’d like to talk about RIGHT NOW is this list. What can we take from it?

(I should point out that I’m assuming none of the above list is a work – hopefully no grains of salt are necessary, but with WWE, you never know…)

1. Taking up a supermajority of these listing, it looks like the “live feed” is far and away preferred to “on demand” when it comes to consuming WWEN. This makes sense because the more casual fans (1) may not be as interested in surfing/pressing a lot of buttons to consume content, but more importantly, (2) they CAN be conditioned to “tune in” at certain times to catch a show – whether or not they will KEEP tuning in will probably depend on whether or not WWE can keep their content compelling.

2. Along those lines, the “actually live” show (RAW)’s pre- and post- show make the list, but the Smackdown equivalents don’t. It would be interesting to see if they make the lower half of the list on a non-Warrior week…or if people know there really isn’t a good reason to devote more of their Friday nights to taped shows wrapped around a taped show.

3. Legends House was #1? I’m a LITTLE surprised, but then again, we’ve probably established that the older, moneyed, “nostalgia” crowd is a significant chunk of investors in this product. (I still haven’t watched it. I’m not sure I can deal with any more “reality” programming, especially after giving up on “Total Divas” after the first season) On the other hand, if ANYTHING in this is a work, it’d be this: WWE’s way of telling all the networks who passed on paying some rights to broadcast it “nyah nyah, look what you missed out on, these [possibly fake] ratings could have been YOURS!”

4. Does NXT placing so high indicate people are hungry for something they’re not getting on the big shows? And, if so, are they getting it?

5. Is Daniel Bryan’s placement in this list a validation that folks really like Daniel Bryan as a face of this company or is it more that this happened to be what was on the live stream at the time? Or perhaps a bit of both?

I hope this is something WWE will give us every week so we could see if any trends are emerging – but, again, they may not want us to see all their cards and I would totally understand them keeping this data private. (I bet somebody leaks it to the sheets, eventually, though.)

On the analytic tip, I’m greedy. My wishlist includes:

I am hopeful that WWE is devoting an entire team to studying just HOW their product is being consumed – and then generating useful strategies for how to enhance their CURRENT product based on what their captive paying audience of the Network is telling them.

Don’t forget to check out CRZ on the Place to Be Podcast!